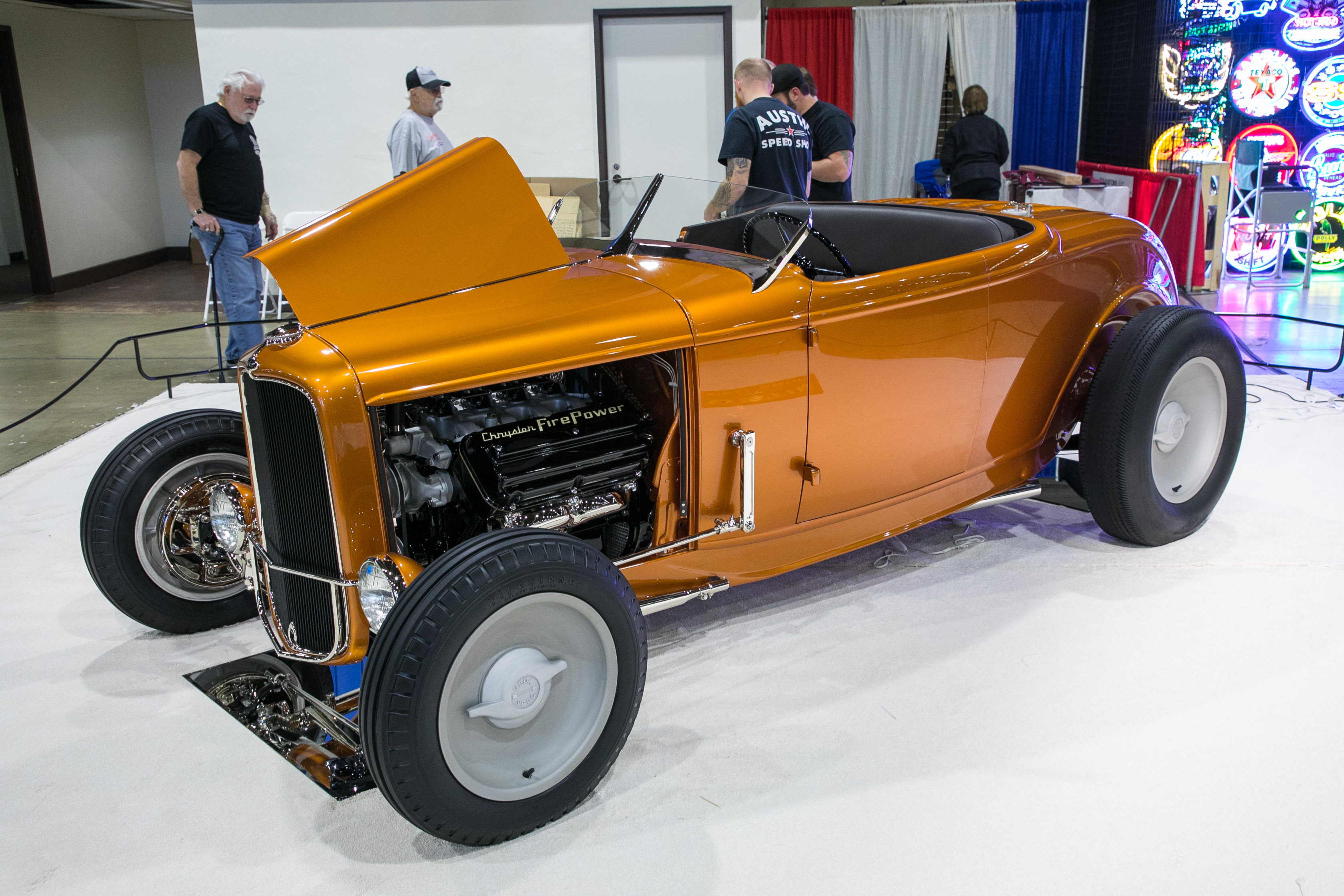 It was more than 30 years ago that I went to my first Grand National Roadster Show, back when it was home in Oakland California, and the electricity and excitement of that event then is still present today. The venue may be different, and the cars most certainly are, but man this place is a must see. Like every year, the variety of cars that have entered into the competition is as unique as it is cool. We’re talking traditional cars, much like Darryl Hollenbeck’s 2016 AMBR Winner, and art deco and full custom cars that are an exercise in what if.

Here are the cars that are up for the 2017 America’s Most Beautiful Roadster.

One of the cars that most surprised us, is the 1932 Ford that is owned by James Hetfield. They call it BlackJack. And in truth it isn’t the fact that James brought a very traditional hot rod, it’s that others brought swoopy one-off and art deco style hot rods that we typically associate with a Hetfield effort.

BlackJack is one bitchin tradition hot rod. It features real deal Ford sheetmetal, all legit vintage speed parts, and every attempt was made to build it as if it was built in the 1940’s. Except much, much nice! We dig this hot rod for sure. 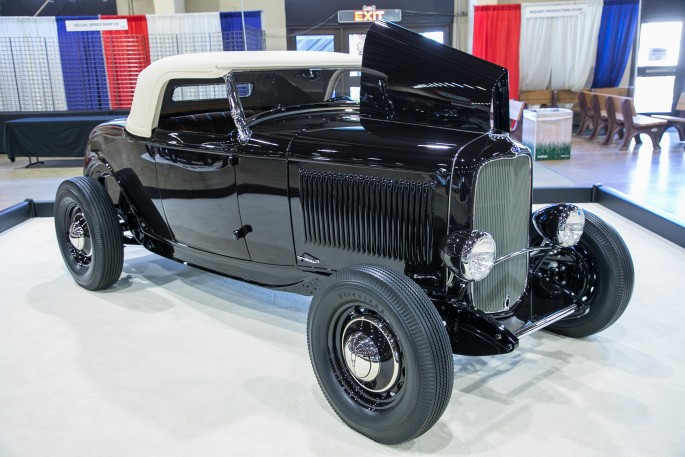 Our friends at Stoker’s Hot Rod Factory have been working on Bill Grant’s 1932 Ford at a pace that most would not believe. The three person Stoker’s crew have truly been enjoying the build of this car, and that dedication, time, and attention to detail, are obvious. This is perhaps the purest roadster in the competition, and because we have seen it progress we are in love with this cars charm, bitchin Miller-Cragar and Stromberg speed parts, and more. Dan Peterson’s 1932 Ford is awesome! This sucker is ultra bitchin and just screams hot rod to us. They say this one is inspired by Bonneville, and we can see that in some of the elements of the build. The Hemi is a great touch, But those wheels, and everything else finished in this cool blasted look, just pop. This car will have a large crowd of fans. 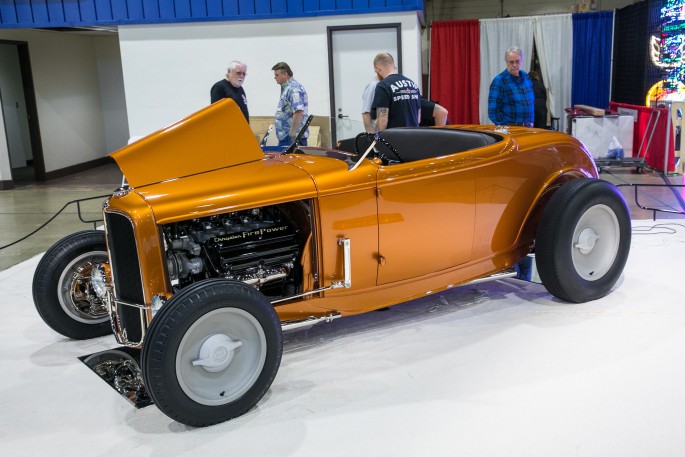 There is something about this truck that just screams hot rod. The stance, the color, the wheels, all of it. And the brave decision to roll with full fenders also makes us applaud Don, who HOME BUILT this car. That’s right, this one was built by Don himself. And we also have to applaud Cleveland power, and Top Loader 4 speed, and all the louvers. It’s a beautiful truck, and fans of a pickup bed will most certainly be rooting for a pickup win come Sunday at the Grand National Roadster Show. 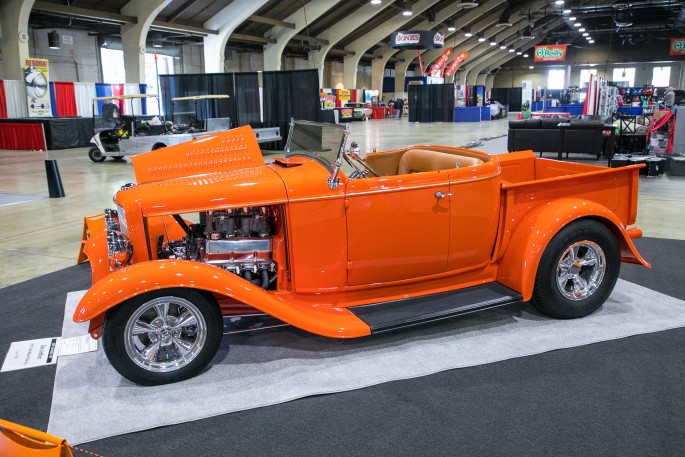 Another traditional hot rod here, that really makes us want to get in and drive. It also reminds us of last year’s winning entry, the Roadster of Darryl Hollenbeck, albeit a little lower and sleeker. It’s our kind of traditional hot rod, with enough period correct parts and style to make it at home at any show or on any road. This one will be another crowd favorite. 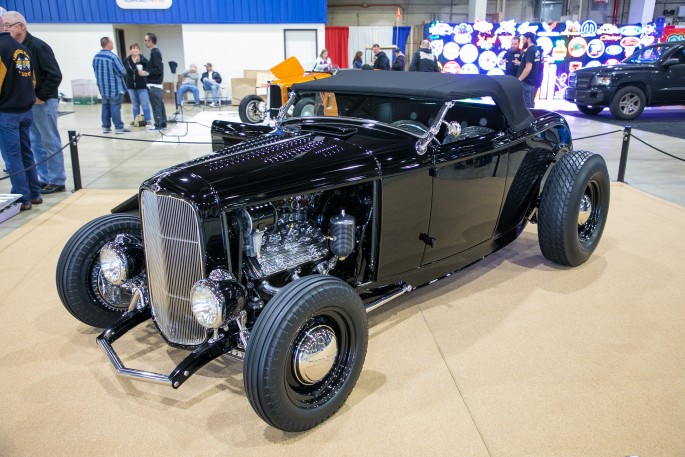 This is one classy hot rod, which makes sense considering it was put together by some of our favorite builders, Troy Ladd and the gang at Hollywood Hot Rods. It’s awesome, we love it, and it would make a huge splash pulling up to a Hollywood Red Carpet event. This cars has been going together for several years, and we thought it was amazing in bare metal a couple years ago here at the show, we had no idea it could look any sexier at the time. If you think you can spot all the modifications on this one, think again. The Hollywood Hot Rods crew are masters of subtlety and class. This one will be a big hit. 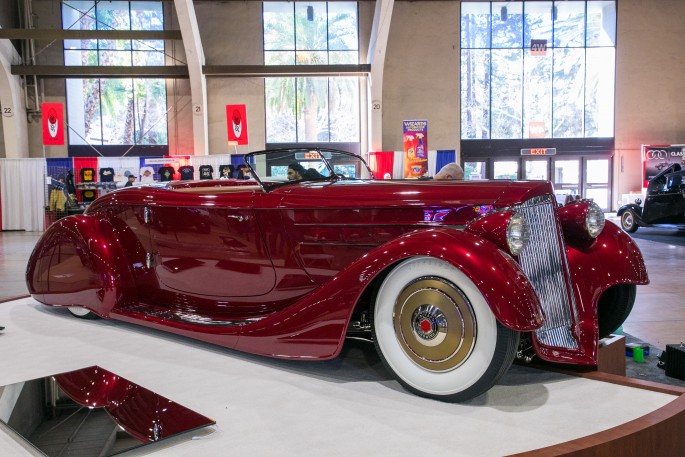 There have been a few Phaeton’s up for America’s Most Beautiful Roadster in recent years, but Jim’s car is a bit unique. Clearly it is one hell of a nice car, but two things set it apart from most others you’ll see. First, it was built entirely in Jim’s garage by he and friend Bill Akin, and second it has some crazy rare and awesome Al Barnes sprint car cylinder heads. We weren’t there to see it drive in, but from what we hear it sounds awesome. 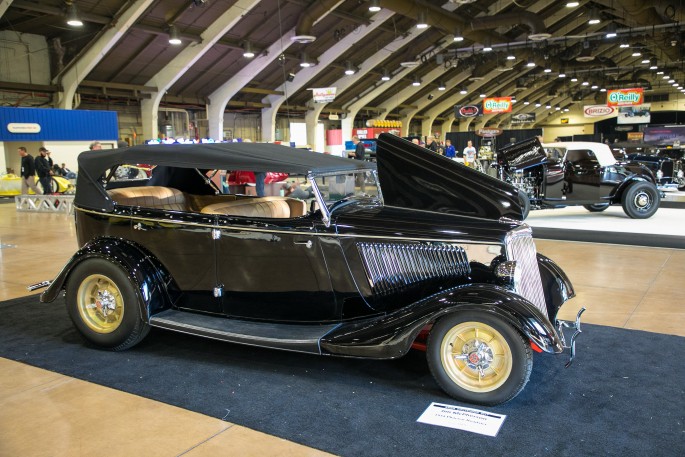 To us, Matt Gordon’s Time Merchant Pickup, ooozes Grand National Roadster Show. This truck’s personality is purely Grand National. It’s a custom style brings back memories of my childhood at the Grand National in Oakland. If shot with the right camera, and without anything modern in the background, this car would be fitting for a Grand National decades ago. And it’s Olds Rocket powered! 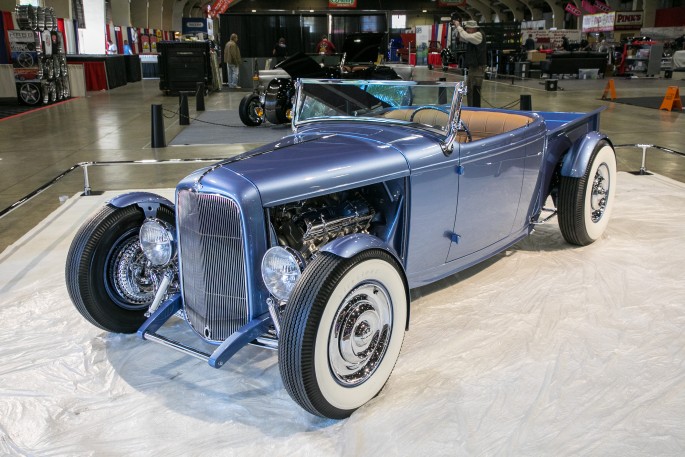 A Dodge?!?!?! What? Yep, Matt Taylor showed up with his 1927 Dodge to stir up the Ford crowd, and we kinda love him for it. His car stands out in a sea of solid color cars, with the 1960’s custom style paint and a lowboy stance that is truly hammered on its nuts. Everything about this car is old school custom, from the upholstered firewall to the gold small block, and everything in between. It’s all Mopar, so the Mopar fans truly have someone to root for. Straight out of Norther California, Scott Hawley showed up with an AMBR Contender that is a super tradition driver. Touched by several good folks, including last year’s winner Darryl Hollenbeck, this one is clearly built to be a driver once the show season is done. A stroker small block, and 4-speed, make it a fun one we’re sure. Another classic hot rod roadster that would be at home anywhere, this one will only exaggerate the dilemma fans will have in choosing which traditional roadster they like. The name comes from previous owner Glen Begor who passed away before finishing the car. He was born in 1947, and after buying it from his estate, Scott and crew finished it in his honor. Killion’s roadster started off as a 1928 Ford, but with the use of a lot of Zephyr parts has morphed into being called a Hot Rod Lincoln Roadster. Shawn is not stranger to bitchin rides, and drives a variety of race cars, so you know this little hot rod is the real deal. We were told it was built on a pretty tight deadline compared to some of them here. It’s as low as a highboy can be. It’s not channeled, but it’s got some serious chassis mods out back to make the stance just right. We dig the Maroon color as well. Something about this one really turns our crank. 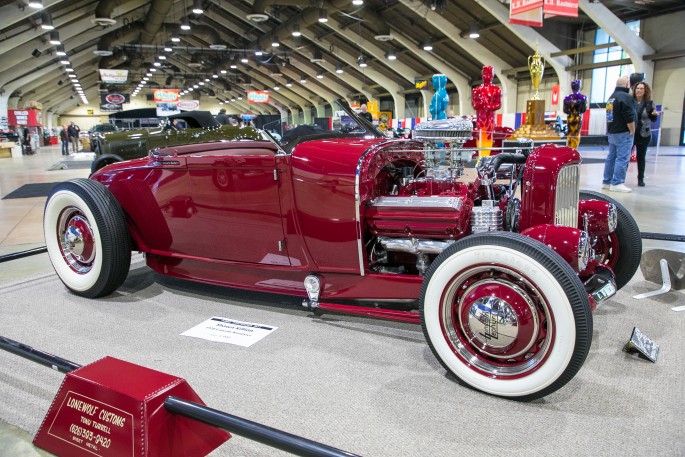 Wayne’s Track Nose Roadster is a really cool hot rod, and we appreciate the time and effort that have gone into it. The proportions of this one are just right, which is not always the case on track nosed cars. It’s an homage to the old dirt track cars and we like the look for sure. Nothing isn’t touched on this one, but what excites us most is the fact that it has a high horsepower small block FORD under the hood! 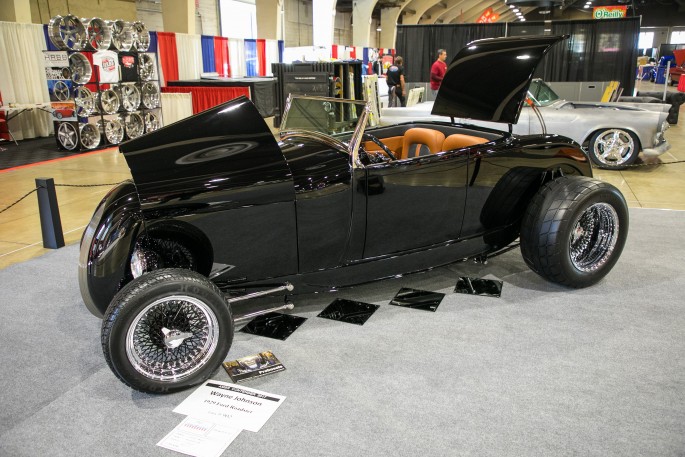 Glen McElroy’s 1937 Ford is one for paperwork purposes only, as there isn’t anything of the original car left. This is one sexy, smooth, and bitchin hot rod that made us think of James Hetfield the moment we saw it. James is a junkie for cars like this and we’re sure he’ll be drooling over it as well. Parking this one next to the Mulholland Speedster 1936 Packard would result in what many will consider to be the sexiest pair at the show. We can only imagine the effort and skill that went into creating this one, and know that it too will be a crowd favorite. We somehow screwed up on our photos of Glen’s car, but will get more today. Until then we want to thank the Goodguys Michael Harrington for providing us with a photo during move in. 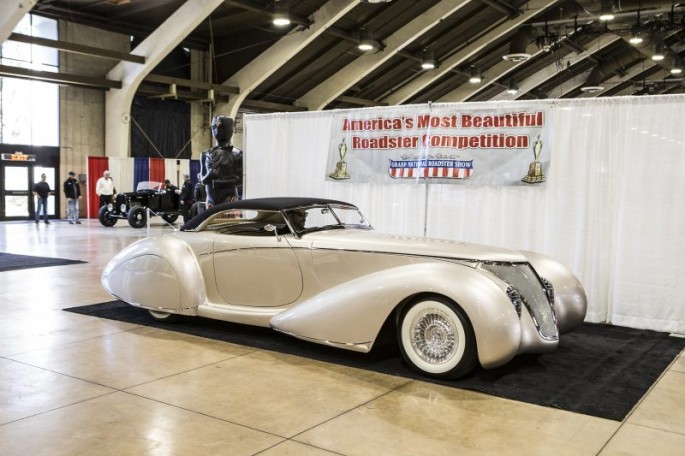 Prepare Your Eye Bleach: This 1976 Buick LeSabre Is An Automotive Experiment Gone Awry! Watch This Camaro Destroy Its Own Rear Quarter Panel During A Burnout Contest