This Willys Coupe Was Bought New And Kept In The Family. This Survivor Is Now Fully Restored And Awesome 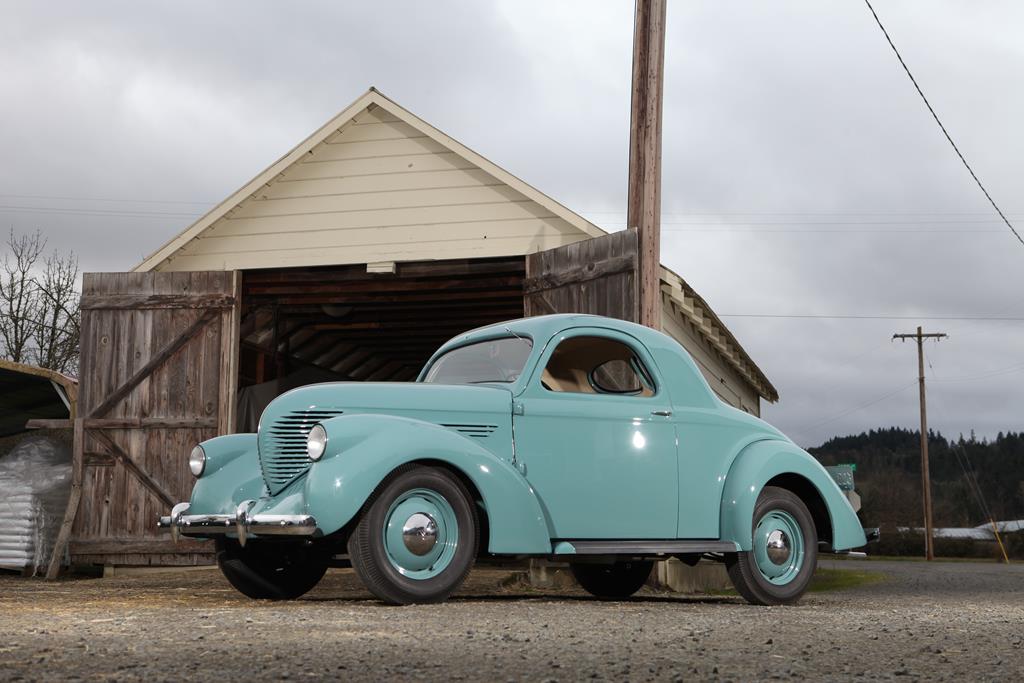 When we first heard about the guys at MetalWorks restoring Sheridan Hales one owner Willys Coupe, we knew we had to check it out. And man were we glad we did. The history of the car is awesome, and you can read all about it and how the MetalWorks crew came to be the chosen restorers in our first installment of the build. CLICK HERE IF YOU MISSED THE ORIGINAL STORY

Fast forward, and it is time to see the car in its entirety, finished to original perfection, and ready to drive again. I have to say, I LOVED the originality of this car and the patina that it had. It was amazing. But seeing a one owner car brought back to this level of originality is just amazing as well. I love it. I’d drive it as is. And everyone would love me for it.

There is a gallery of photos, and video of the car from when it was new and since it has been restored, below.

Here’s the story from the guys at MetalWorks.

After the crew at MetalWorks had a good long look at Sheridan’s incredible survivor coupe to appreciate how special it was, they got busy on its restoration. Typically the guys would immediately start the tear down process, but the cracks in the sheet metal were addressed first while still attached to the car. After some welding and metal filing they got busy with the actual tear down process.

The body came apart easily with hardly a broken bolt; the dry California climate had really treated the coupe well. The Willys was gently disassembled down to a gutted shell in preparation for acid dipping to remove the paint and any rust. MetalWorks has been dipping their restorations for over 20 years and it’s always interesting to see what comes out of the tank. Most times the bodies come out looking fine, but sometimes hidden sins are revealed, even as crazy as 2 car bodies being welded together. The 37’s body came out beautiful and original.

The coupe’s main area of rust was the far back edge of the trunk that tied into the bottom of the body, and small areas in the doors and bottoms of the rear quarters. The guys fabricated a panel to fix the trunk and other small areas and the coupe was rust free in no time and off to body work. MetalWorks has produced many custom builds and high end restorations that leave the shop radically nicer then when they left the factory, but when it comes to an OEM style restoration, you have to be careful not to “over restore” the car. Very careful attention was paid to the Willy’s body during the body and paint work to ensure that the desired result was achieved. 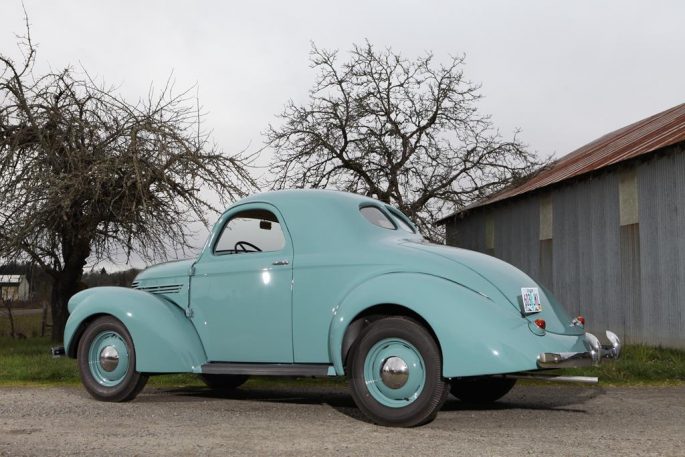 The body was sprayed in a correct shade of factory 1937 green along with running boards that were sourced from Willys guru Jon Hageness in Osseo, Wisconsin. As a base model, the coupe did not come from the factory with running boards, but it was agreed that they would be a nice addition. The under body and inside of the trunk were treated to Raptor undercoating.

While the body was being tended to the chassis and drive train were also being restored. The coupe’s original engine had been replaced with an Army surplus Jeep engine at some point, but luckily the original engine was kept by the Hale family. Not so lucky was the fact that the engine block was severely cracked, and the head had a hole the size of a softball. The initial thought was to locate another 1937 engine, and surprisingly a pair were located rather quickly through the help of the Willys community. One of the engines was the power source for a portable generator and the crew at MetalWorks was able to get running with very little effort, but sadly it had leaks when the engine reached temperature. The 2nd era correct engine was also found to issues with cracks. In the end, and to make a very long story short the factory block and head were able to be saved by the very talented team at Rick’s Cylinder Head in Milwaukie, Oregon. The cracked block was fixed and the head’s massive hole was patched using metal from one of the spare engine heads. The original fly wheel and clutch were also salvaged, then, the best components from each of the 4 engines were utilized in the final product. The connecting rods from the factory had poured babbit bearings, so they were upgraded to bearings with replaceable shells. All the machining work was handled Springer’s Performance in Eugene, Oregon. The engine was a battle, but now purrs like a kitten making all the effort salvaging the coupe’s original 4 cylinder worthwhile. 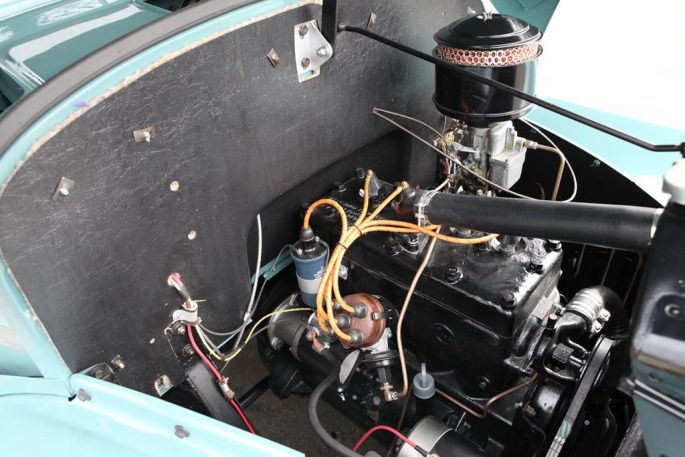 If you remember in the first story the Willys was parked due to a broken headlight that could not be located. Well a replacement was certainly no easier to find some 50 years later, but thankfully Al Lindgren in Minnesota had a pair he was willing to let go of that he sourced from a museum. The guys had some sweaty hands assembling the delicate and extremely odd headlight assemblies, but they turned out great. The assembly process went smoothly and soon the 37 was ready for upholstery with was kept OEM in style, but upgraded to leather. The stock gauges were rebuilt except for the white faces as they were very presentable. The NOS hubcaps along with many other rare parts and knowledge were provided by “The Willys Man” Ron Ladley in Pennsylvania. 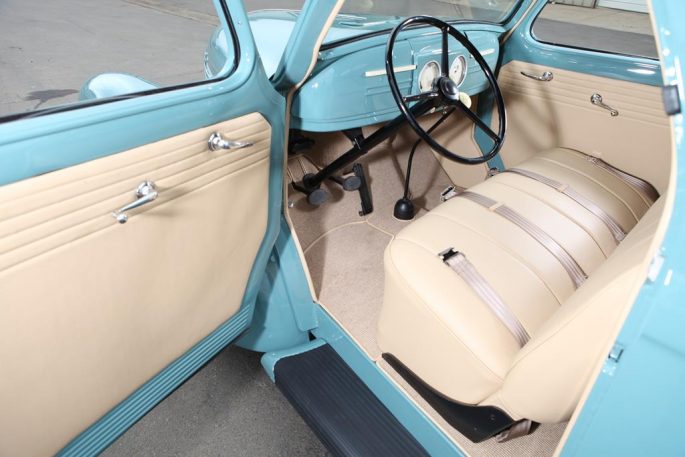 Sheridan’s coupe lives again thanks to the skilled crew at MetalWorks and the dedication of his family who had it restored in his memory. The Willys has already been in the Hale family for 80 years, and will now be enjoyed for many more generations to come. And we can all rest easy that there is a fine example of a mostly original 1937 coupe still out there cruising the back roads of the Pacific Northwest.

We have a full gallery of feature photos below. Check them out. Click on any one of them to make them larger and to look through them like a slide show. And get even more photos by visiting MetalWorks page as well!

SEE THE VIDEO BELOW THE PHOTOS!!!

Foose vs. the AMC Pacer: How Would He Take Care Of AMC's Glass Egg? We've Got Drag Racing Photos From The Lonestar Nationals Featuring The Mid West Pro Mods!

2 thoughts on “This Willys Coupe Was Bought New And Kept In The Family. This Survivor Is Now Fully Restored And Awesome”