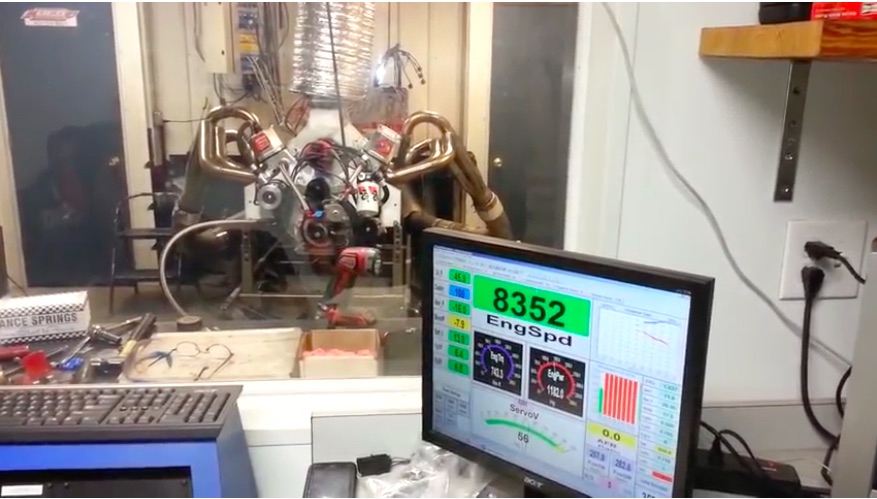 If you’re a fan of Pontiacs, you need to stop, sit down, take a deep breath or two and then watch this video…400 times. You are going to see a Pontiac engine, built by the McCarty Racing team that uses a set of their insane Ram Air V heads make 1,200hp naturally aspirated and sing to 8,300 RPM. The McCarty brothers have long been known as Pontiac stalwarts. They raced some of the fastest Pontiac cars n NHRA history in various forms and classes. We do not know what this engine was intended for but perhaps a Competition Eliminator car or something of that nature.

The cylinder heads are a modern interpretation on the legendary and ultimately impossible to find Pontiac Ram Air V heads that were sold in very limited quantities to racers and used for competition purposes. Those original factory heads flowed more air than a Chrysler hemi and were intended for high rpm horsepower on larger engines. Apparently on about anything smaller than a 428 they were horrid down low because of the air volumes that they were capable of moving.

I found this video and figured it would be pretty good but boy was I blown away when I actually watched the pull. I then started reading up on the head and man alive is this one impressive monster. I do not know the specific size of the engine but the video lists it as a 455. That would not be too far out of the realm of reason for us and it also means that the thing is making about 3hp per cube!

Some will argue that it is not really a Pontiac anymore because of the specialty heads but they are bolted to a Pontiac style block and the basically layout is as the factory intended, so convince us otherwise!

There’s noise and then there is NOISE! Watch the video below and hear a symphony –

Build Battle Two! Hoonigan Kicks Up A Drag Racer Battle Between An S-10 And An RX-7! Rub Some Dirt On It: Tractor Pull Carnage Compilation For The Win!