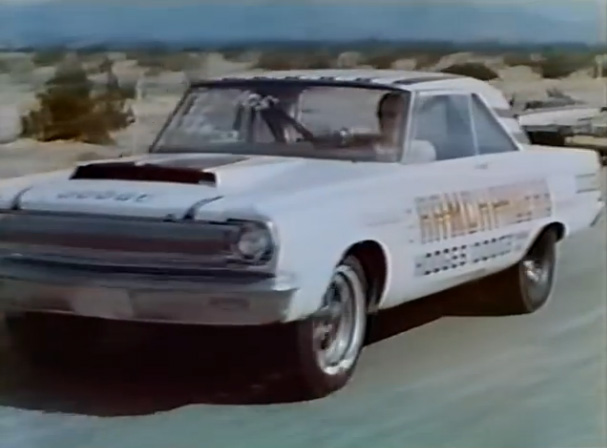 The “other” Winternationals….well there have actually been several “Winternationals” races over the decades other than the NHRA one that we’re all familiar with now. AHRA had one, even NASCAR had one when they were sanctioning drag races.

If we were forced to put all of the drag racing videos we have ever posted in some sort of ranked order, this film from the 1965 AHRA Winternationals at Beeline Dragway in Arizona would be top three. Why? Well it looks as though it was part of a television broadcast of multiple races and it is 100% professionally done from the camera work to the sound and the way the racing action is presented. This is an amazingly rare and complete look at what it was like to spend a weekend at the drags in 1965, especially early in the season when all of the cool new stuff was showing up. If you are a Chrysler fan than this video will literally knock your socks off. Why? This video centers heavily on the door slammer classes with little emphasis on top fuel. You’ll see stock, super stock, ultra stock, etc. You’ll see virtually every lightweight, altered wheelbase Chrysler made for ’65 in one place. We’d venture to say that outside of this race and the NHRA Winternationals, there have never been so many in one place.

Our favorite part of this video is watching the actual procedural end of the racing and how things were handled. From eliminations that seem to use a hybrid “arm drop” style start combined with a light to the “handicapping” in eliminations that was done by car lengths because a handicapping style Christmas Tree was not yet part of the program. We have to say that the “lengths” style handicapping doesn’t exactly look like a perfected science because with rare exception the slower car gets eaten up almost instantly when the flag/light/arm drop happens.

The most breathtaking part of the film is the parade of door slammers that was done before eliminations. This nearly brought tears to our eyes because (a) all the car are actually being driven down the track, not towed around or pushed and (2) to see all of those cars and people physically on the same drag strip at the same time is something that even the crowds at Beeline couldn’t have appreciated. Half of those guys (more?) are in the hall of fame and three quarters of them probably should be. To have them all there, rumbling down the track is stunning.

Lastly, this video should give you a real sense of how serious Chrysler decided to get with their cars in ’65. There are a ton of them in the field and the hemi powered brutes are virtually unstoppable. If you can’t enjoy the sights, sounds, and smoke from this amazing look inside the 1965 AHRA Winternationals, you need to pick up knitting or something. This is all-time.

Gearhead Zen Video: This Video Featuring A Day At The Phillips Brothers Steam Powered Sawmill Is Amazing Watch Kate Harker's 2007 NHRA Sonoma Blow Over - The Last One Before May 2018!