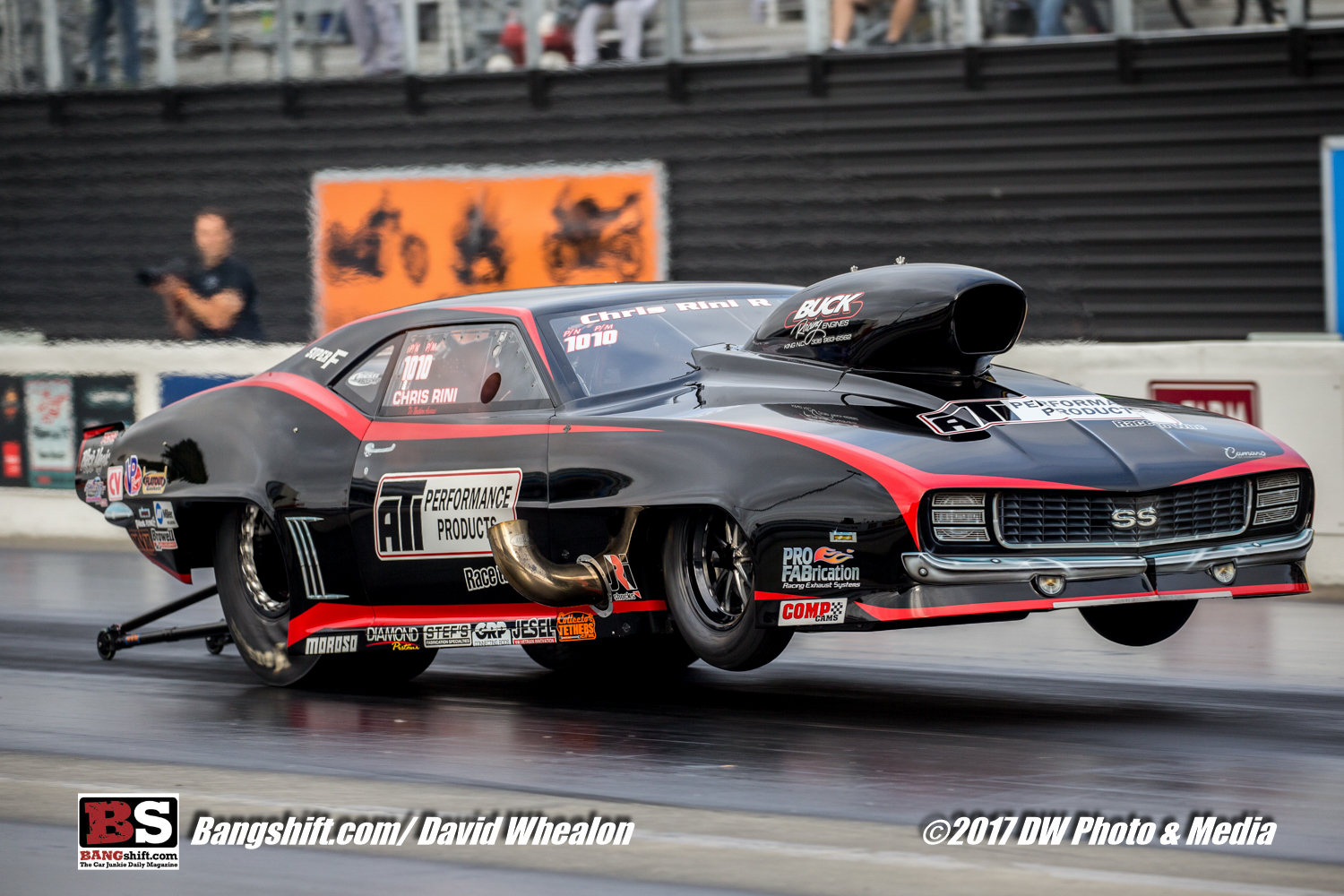 (Words and photos by David Whealon) –  As to be expected, the last race of the sophomore drag racing season at the cutting edge, multi-use Galot Motorsports Park was nothing short of awesome. With the Mad Mule Finale Pro Mod Shootout slated as the marquee matchup, four side card classes were added to make the final one-day event that much more riveting. Added were twin shootout races for Dragsters and Door Cars, 4.70 Outlaws and Jr. Dragsters. And as an added bonus, the July Mad Mule final round, that was cut short by weather, was set to be run for a cool 10k during qualifying between the Buck Powered nitrous Camaro of Jay Cox and the blown Brad Anderson horsepower of Galot Motorsports’ Ty Tutterow.  Both guys had a chance at doubling up the payday and making the weekend take home pay pretty darn lucrative with Christmas just around the corner just in time to bring themselves some off-season winter tune-up cheer.

With three scheduled rounds of qualifying for the one day event, the competition was just as heated as ever with some of the 20 teams struggling to get in the 16 car field. The bump spot was all over the place, with some great cars such as Tommy Mauney in his nitrous ’68 Camaro and Buddy Perkinson’s ’13 Camaro on the outside looking in, only to jump into the field in Q3. But holding on to the No. 1 spot all day was 2017 PDRA Pro Nitrous champ Tommy Franklin in his Musi powered “Jungle Rat” ’69 Camaro with an astounding 3.68 at 204.14 mph. The entire 16 car field was separated only by an incredible .174 seconds.  Also, in the key holdover matchup for the July trophy and the big check in Q3 was Ty Tutterow, striking the tires off the line leaving Jay Cox holding the July Mad Mule winners title.

Round 1 started out with some crazy, unanticipated action with the No. 3 qualifier Lizzy Musi, sidelined after her burnout with a fuel problem and the nitrous cars of Jason Harris and Charles Carpenter unable to take the green.  Moving on to round 2 were Doug Winters, Rickie Smith, John Strickland, Ty Tutterow, Tommy Franklin, Buddy Perkinson, Randy Weatherford and John Camp. The trip on to the semis was a pair of classic nitrous vs blown pairings. With an uncharacteristic red light for Rickie Smith had Galot Motorsport’s John Strickland and his no. 2 qualified blown ‘68 Camaro headed to the finals. The battle on the line between the blown ’69 Chevelle of Doug Winters left the No. 1 qualifier Tommy Franklin in the last finals spot.  Final round action was one for the record books, with both of the fastest cars on the property going head-to-head on yet another classic blown vs nitrous clash. With a hole shot victory by Strickland, Franklin battled back around at the 200’ mark to take the win with a whopping 3.67 to Strickland’s 3.68. What’s better way to end the Galot Motorsports Park season?

Other Class winners included were the Joe Lepone Jr. Tribute Berretta of Shane Westmoreland in 4.70 Outlaws, Nick Womack in the Dragster Shootout, Jarrett Creech in Door Cars and in her last junior race Hailey Hawkins and Ryan Leche in the Jr. Dragster categories.

2018 looks to be even more badass than what we have witnessed for the previous two seasons with two more PDRA races, Man Cup motorcycle drags, NTPA pulling, Monster Trucks, NHRA and Summit Series bracket races and the ever popular Mad Mule Shootouts. It’s gonna be a long winter…

VIDEO: Destruction Denied As Pontiac Silverdome Does Not Give In To Botched Implosion Attempt Ever Wanted An Off Road Capable Fox Body Mustang? Well, Now's Your Chance!