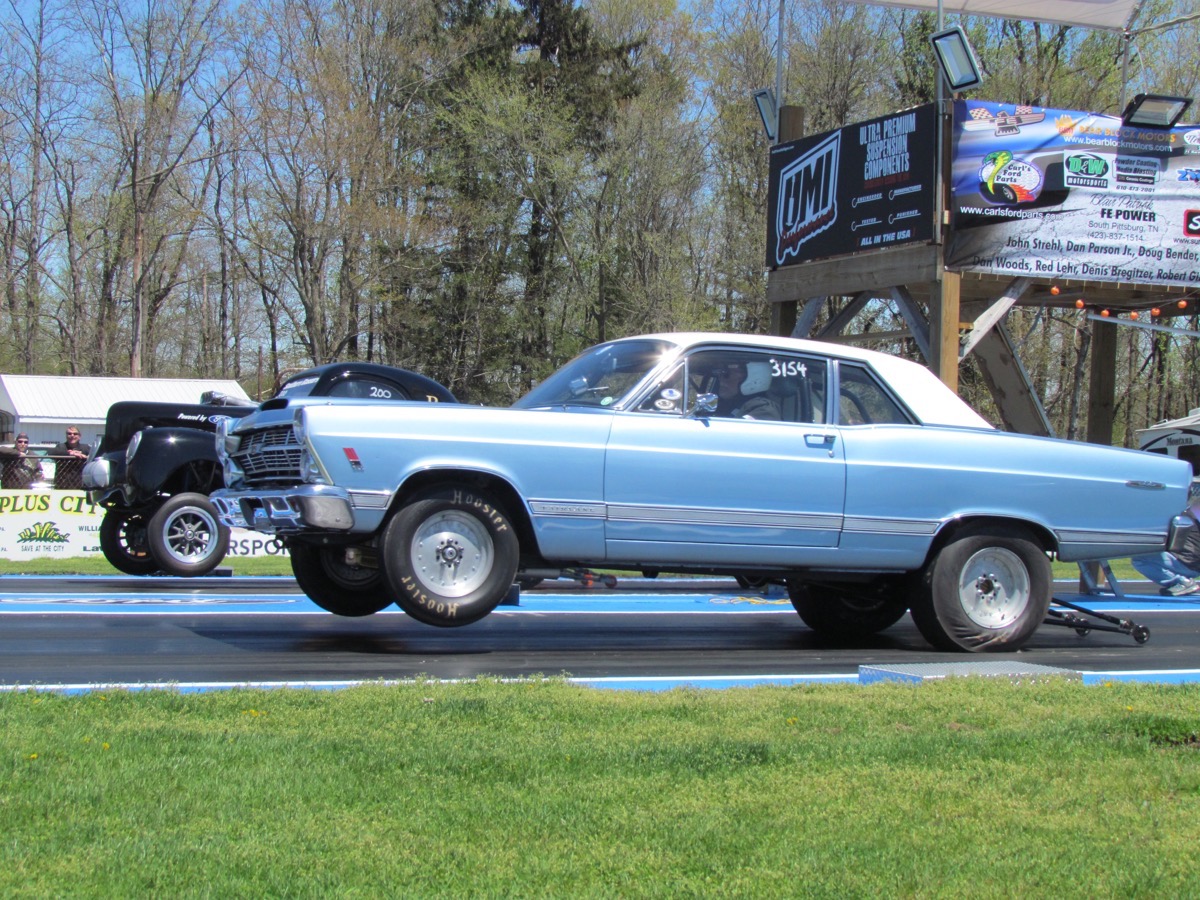 (Words and photos by Joe Grippo) –If you are a BangShifter of the Ford persuasion and have been near any social media in the last few weeks, undoubtably you have seen some of the action that went down over the weekend of April 27th or 4/27. For the seventh year in a row, hundreds of the hardest of hardcore Ford fanatics converged on the little town of Beaver Springs, Pennsylvania for the annual FE Race and Reunion. For the uninitiated, this deal is an event celebrating one style of an old Ford powerplant, an engine that was produced for roughly 20 years and was last available commercially in the mid-1970’s, we are talking about the FE Ford. Featuring cubic inches of 352, 390, 406, 427, 428, among others, the FE found its way into everything from trucks to Torino’s and Mustangs to Top Fuel Dragsters. Some may see this variant of the big block Ford as a dinosaur, but certainly not the folks who packed the Beaver pits for a few great days of drag racing, car showing, parts swapping, bench racing and partying. With the weather models looking iffy, we loaded up my dad’s 428CJ powered ’66 Fairlane into my trailer and hit the PA turnpike west and headed for Beaver Springs Dragway to go and get it on with our Ford brethren.

This gathering of Ford iron (Fe on the periodic table, coincidence?) is off the charts. Cobra Jet Mustangs, bad ass Fairlane’s, Galaxies from the 60’s and loads more battled on the strip in four classes, Cool FE (12 flat and slower), Hot FE (11.99 and quicker), the quickest 8 of the Hot FE’s squared off in Pro FE, there also was a Cobra Jet Class for original factory equipped  CJ cars. Other fun stuff included a gamblers race and a Friday night bicycle shoot-out. Beaver Springs Dragway recently changed hands and new track owner Mike McCracken supported the FE Race and Reunion with some new track improvements while still maintaining the nostalgic feel of the facility. The manicured grass in the pits made a wonderful spot for the FE only car show. Check out the photos of the sweet Starliners, Shelby Mustangs, cool trucks and more. The little Model A roadster was a former 427 SOHC powered Comp Eliminator car back in the 60’s and was unearthed only a few weeks before the show, the new owner was reunited with the current owner of THE actual Cammer that was originally in the car who happened to be at the event! Only at the FE Reunion.

Eye candy was everywhere, the swap meet was robust, and the manufactures midway was bustling as well with Drag Week hero Jay Brown and Survival Motorsports Barry Robotnick set up with all the latest parts to make your FE fly. The legends area was a busy spot with Cobra Jet pioneer Al Joniec hosting an FE seminar and Q&A alongside his original A/FX Stretch nosed Mustang Bat Car. Biff. Boom. Pow. Bam. Ford drag racing icons Ohio George Montgomery and Barrie Poole also held court all weekend telling tales and answer questions with a few other notable folks. Even modern-day FE guru Blair Patrick was on the grounds and applying his tuning expertise on a few racecars.

One of the big stories of the weekend however, was the weather. While Saturday was bright and sunny, the winds and cold temps made the racing a bit sketchy at times so the decision was made to run to the 1/8 mile. No biggie. Fridays on track activities where unfortunately washed out, which afforded lots of time for catching up with friends and meeting new ones. Attendees came from Europe, Canada and from across the United States, like I said, hardcore. The social aspect of this event is one of the real attractions and that fact cannot be overstated. Facebook, for all its warts, has played a major role in the planning, development and continued growth of the FERR. With a dedicated FB Group as the main info exchange, this event has made lifelong friends of so many folks and turned a gathering of a niche group of FoMoCo fans into one of the premier Ford meets in the world. Pretty special. Make your way to Beaver Springs Dragway in 2020, because the FE’s are coming back! Check these photos out today and we have way more to show you continuing tomorrow!

Morning Symphony: A Dodge Dakota R/T With A Severe Attitude Problem! Somernites Cruise Coverage: A Photo Collection Of Camaros and Firebirds From the Event!