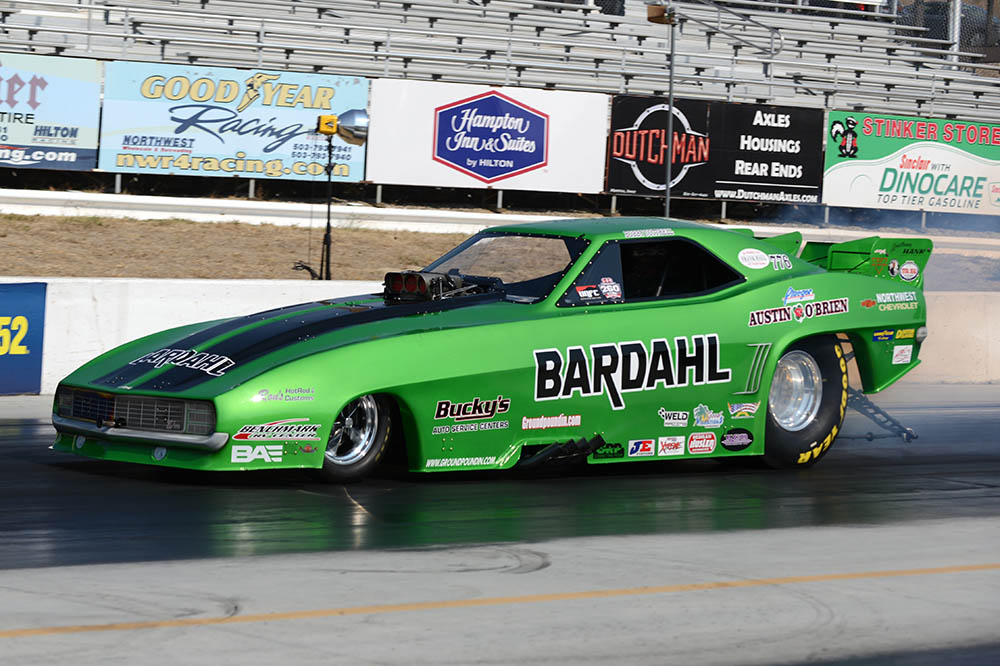 It has been one hell of a season with the addition of the ultra-competitive United Nitro Funny Car Association and the NHRA Hot Rod Heritage Series, making nearly a dozen events that included nitro funny cars.

On the west coast, the UNFC and NHRA Heritage Series have brought nitro funny car racing to even more fans and with the addition of the NHRA Museum finally inviting the Heritage funny car class to the Holley Hot Rod Reunion in Bowing Green, made a move to include the rest of the nation.

Certainly the odds-on leader this season has got to be Bobby Cottrell, driver of the “Northwest Hitter” ’69 Victory Camaro of Bucky Austin and Mike O’Brien. Cottrell has dominated with multiple wins, winning the Good Vibrations UNFC Championship and personal bests all over the western United States. Cottrell won eight events in 2018, including the Good Vibrations March Meet, Heritage Series race at Rocky Mountain Raceways, UNFC Tuscon, two UNFC races at Spokane and two UNFC races at Pacific Raceways. 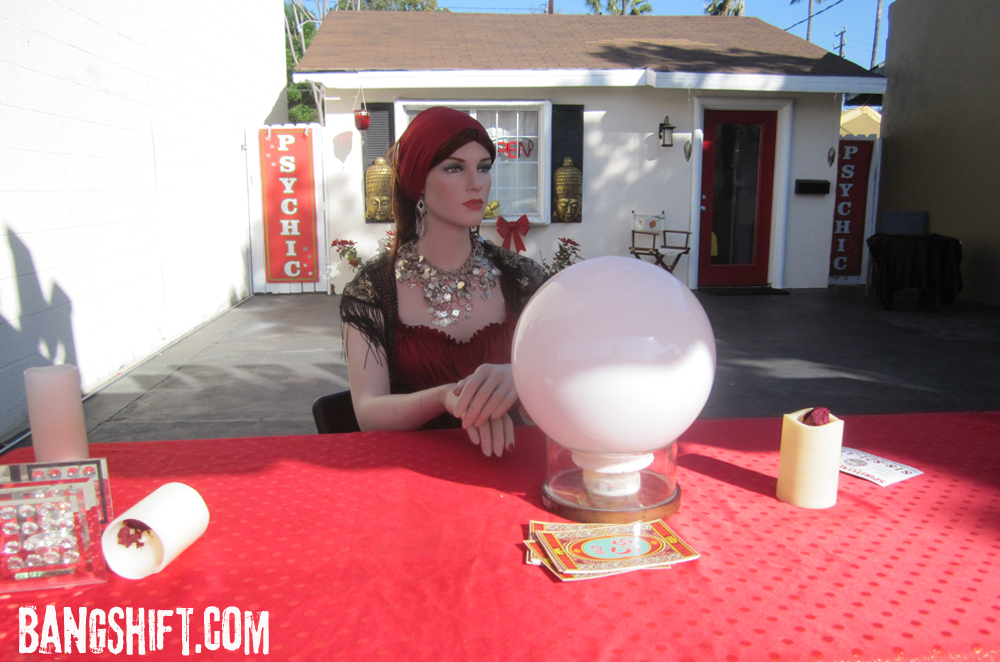 Three “experts” have contributed their best guesses for the nitro funny car class this year, to advise on the BANGShift Funny Car Gypsy’s odds for the Auto Club Famoso Raceway Winners Circle late Sunday afternoon.  These are tough decisions and guesses this year since so many teams have stepped up their performance with more events and passes on the run card.

Nevertheless here’s the consensus of the Top Contenders handed over for the 27th California Hot Rod Reunion.  We can’t guarantee on the Odds and as far as we know there are no Vegas or local Indian Casinos yet that’ll take your bet, however we have seen some money changing hands in the cash the newly refurbished Famoso 1/4 mile grandstands.  The weather should be  awesome! 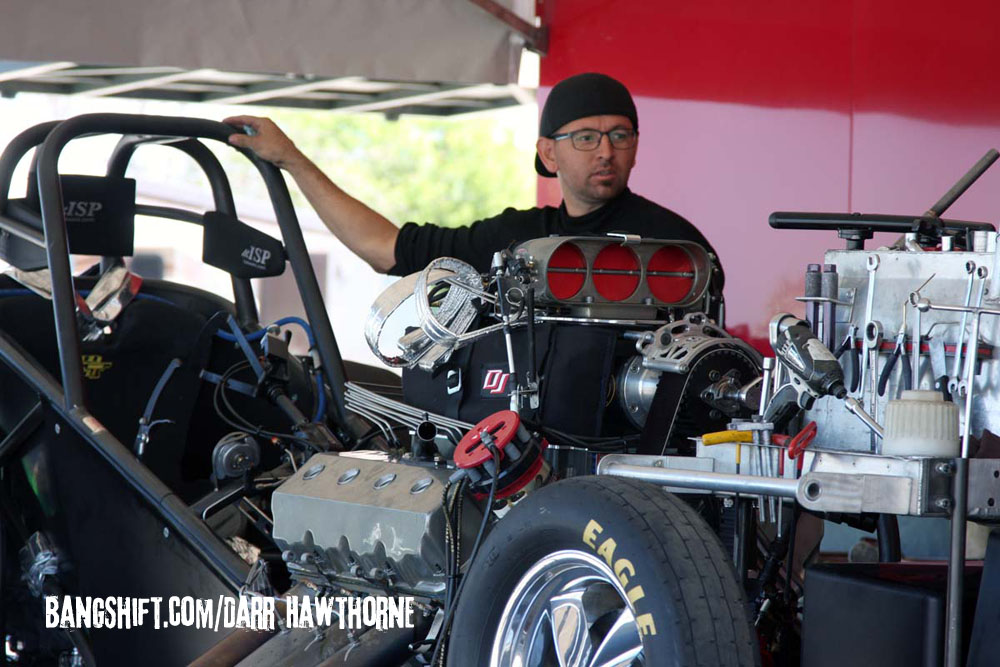 (1-1 Even Money) Bobby Cottrell – “Northwest Hitter” ’69 Victory Camaro – As we picked to win the Good Vibrations March Meet, Bucky’s team is a roll after eight event wins this year and last year’s 26th Reunion trophy. Team has already won the UNFC Championship, could win the NHRA Heritage Championship too. Could this event show a 5.40 ET?  A Legends of Nitro 260 Club Member. 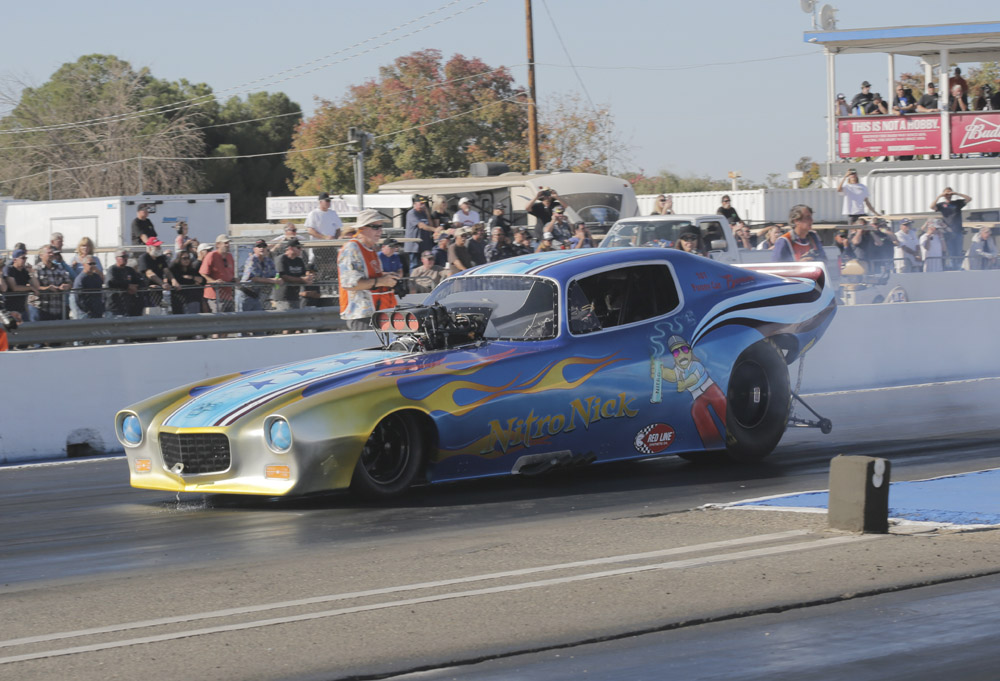 (2-1) Matt Bynum  – “Nitro Nick” ’70 Chevrolet Camaro – on a limited schedule, owner Cecil Matthews has proven his abilities with a runner-up finish at last year’s Reunion and a runner-up at this year’s Pepsi Nightfire Nationals in Boise. Bynum’s driving is second to none, we pick this car for the Finals.  A Legends of Nitro 260 Club Member. 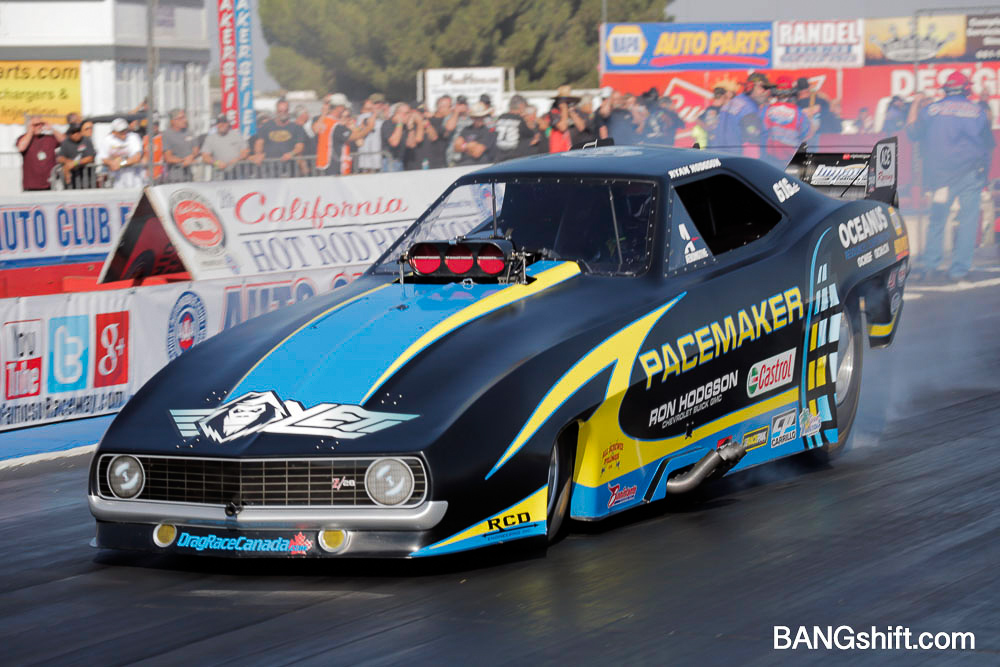 (2-1) Ryan Hodgson – “Pacemaker” ’69 Victory Camaro – 2017 NHRA Heritage Series Champion with veteran tuner Bob Papirnick could make it to the final round as they did at the March Meet earlier this year. Even though they sat out most races this year, they are hard to bet against.  A Legends of Nitro 260 Club Member. 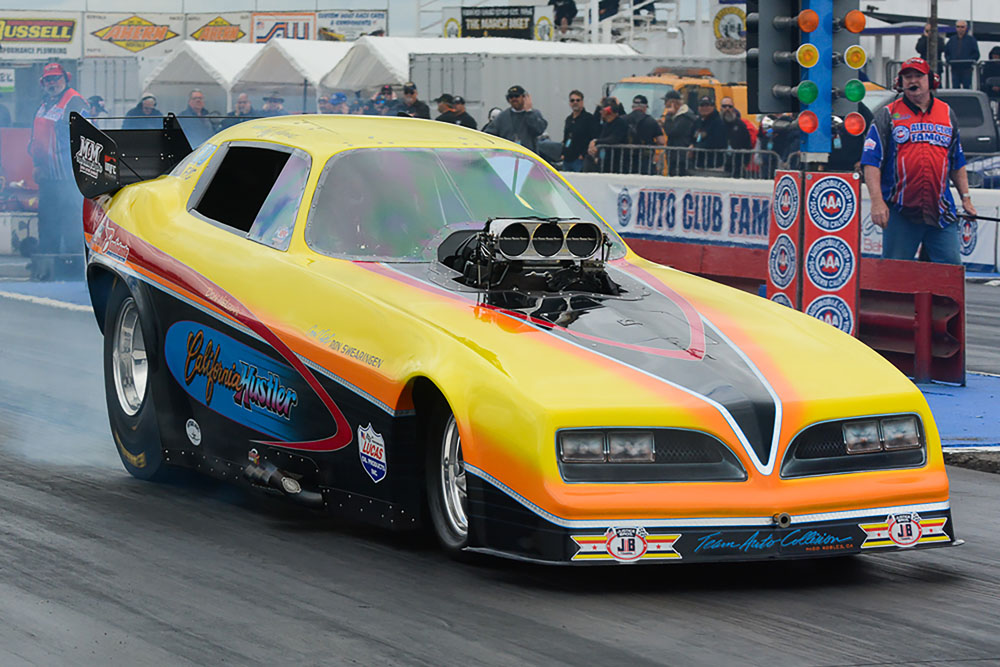 (4-1) Jeff Arend – “California Hustler” ’78 Pontiac Firebird – Veteran tuner Ronnie Swearingen and solid crew finally found the 5.60’s at 259+ and won the NAPA Ignitor at Firebird Raceway this year. Jeff Arend and Swearingen have hit it off well with consistent performance.  Might be a final round here for owner Don Nelson. 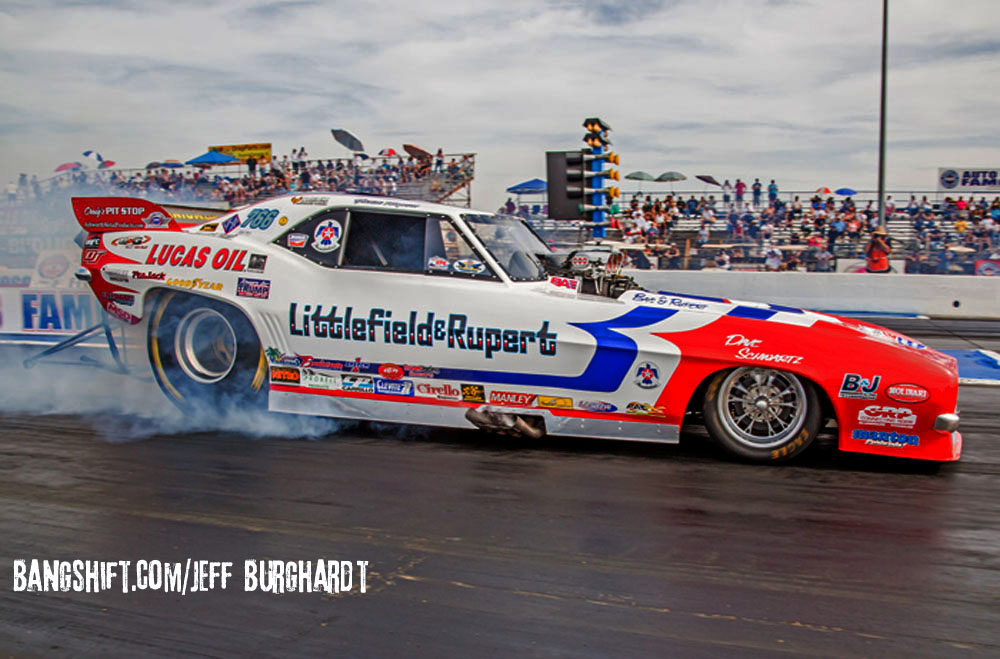 (4-1) Jason Rupert – “Rolling Thunder” “69 Chevrolet Camaro – Tough to bet against this team, but DNQ’d at last year’s Reunion with three oildowns. Rupert is a three-time NHRA Heritage Champion and won the Boise Nightfires this year with a crushing 5.60-253.47 final against Bynum.  Missed much of this season due to injuries, but lost in the first round at Spokane to a hole shot by Wally Giavia.  A Legends of Nitro 260 Club Member. 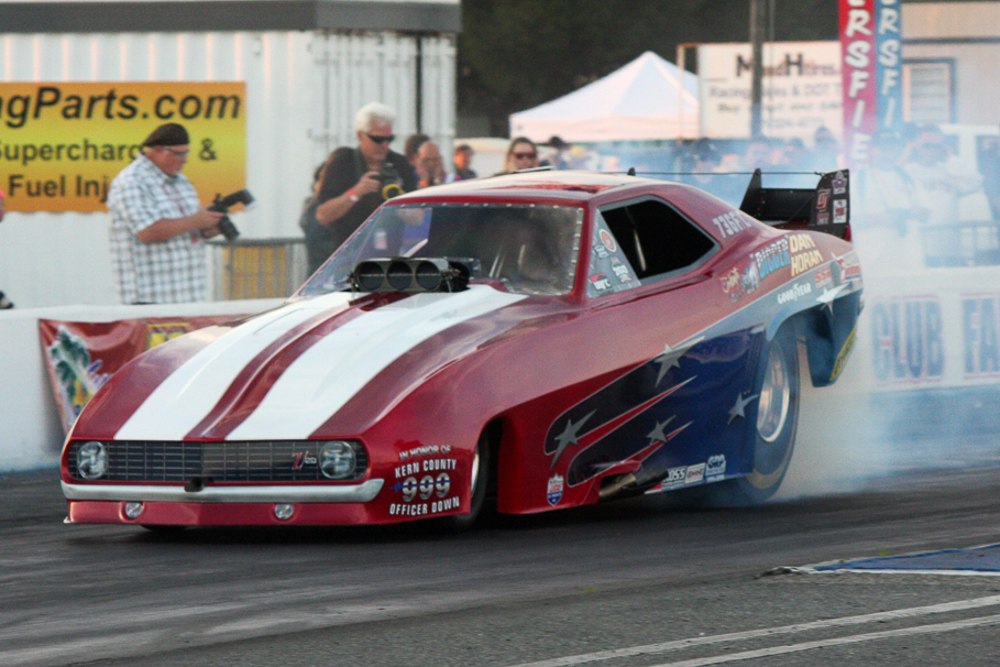 (5-1) Dan Horan –  “Patriot” ’69 Victory Camaro –  he won the 2014 Heritage Series Championship, often talks of retirement, but will field his patriotic NFC and his late Pop’s Top Fueler here at the Reunion. He’s got longtime team leader David Fears still with him and won the NHRA Bowling Green Reunion this year.  A Legends of Nitro 260 Club Member. (5-1) Mark Sanders – “Mr Explosive” ’71 Ford Mustang – No better driver out there, son and tuner Jake “the Snake” is deep into the Indy-based nitro world doing fabrication and learning from some of the best in our business.  This team usually kicks ass and has a bunch of fun. 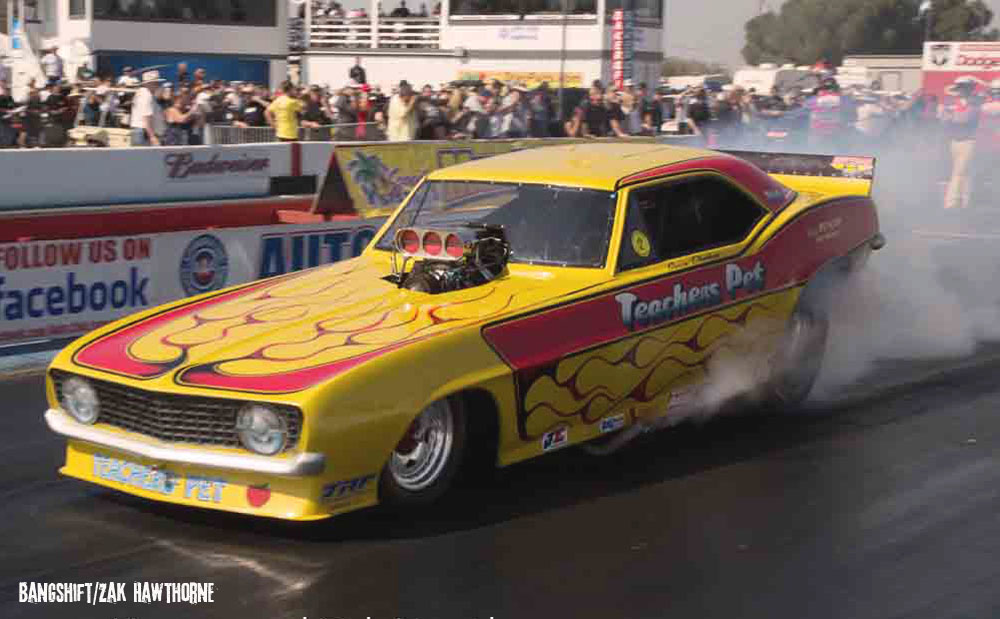 (5-1) Steven Densham – “Teacher’s Pet” ‘69 Chevrolet Camaro – They won the 2015 Heritage Series Championship, but hasn’t run the family Camaro much this year.  Father Gary Densham has burned nitro for so many years – this team can never be counted out. 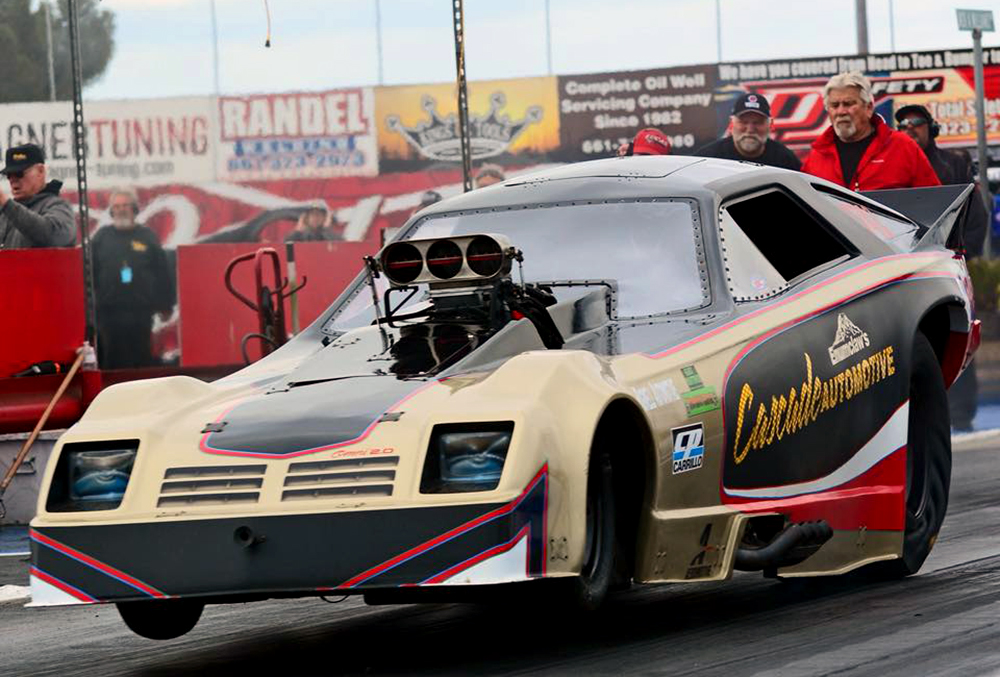 (6-1) Kris Krabill – “Cascade Automotive” ’79 Dodge Omin 2.0 – New team combination with owner Rick Akers, Krabill sure knows the Famoso Winners Circle, this is a proven hard charging funny car team, word is that veteran Del Worsham will be consulting on the tune-up his weekend. Looking for a strong finish. (photo courtesy of Kris Krabill) 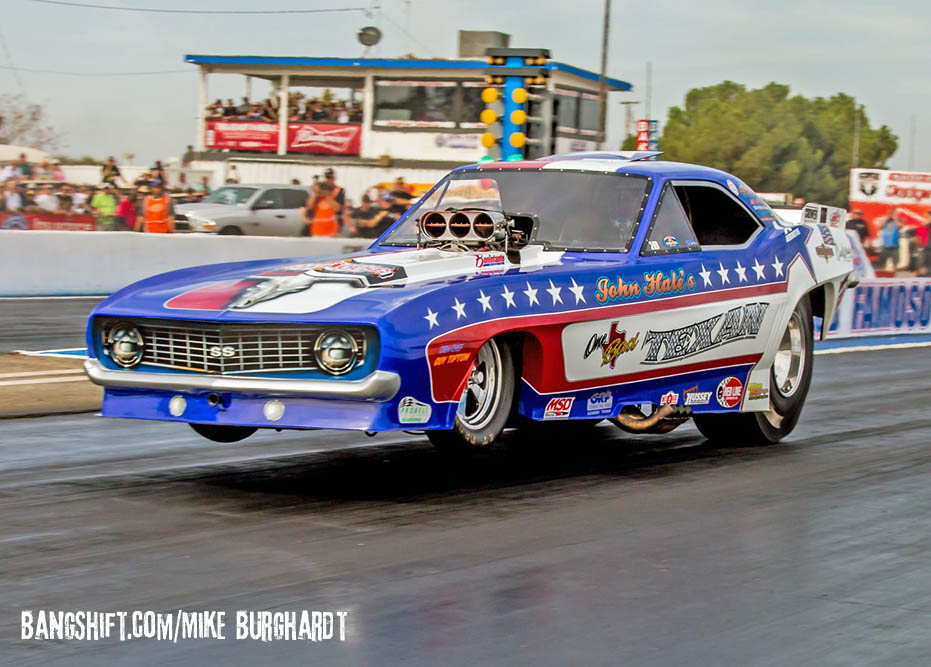 (7-1) John Hale – “One Bad Texan” ’69 Chevy Camaro – Hale has been pursuing his other interests and also run in the Funny Car Chaos series, staying closer to home. Crew Chief Guy Tipton is back and ready for action with a proven team.  John has plenty of his Best of Texas BBQ sauce onboard, too! (7-1) Brad Thompson – “Jailbreak” ’78 Chevy Camaro – Qualified well at the last Reunion with a 5.69, showing his old form and winning performance, but was off-pace at the Nighfires in Boise. Thompson’s NFC is the test-bed for the new generation MSD mag from sponsor System 1 and gets lots of help from veteran Steve Faria.

(8-1) Bill Windham – “Shakedown” ’69 Chevrolet Camaro – Seems this solid team has turned the corner with some improvement at almost every race this year. Veteran racer Windham has driven just about every kind of drag car. A dark horse for sure. (8-1) Billy Morris – “Problem Child” ’69 Chevy Camaro – A new NFC team this year and Morris is a finalist in the Legends of Nitro Rookie of the Year that’ll be awarded this weekend.  Owner Eddie Knox, former Top Fuel Hydro World Champion, now tunes the car and is making progress.  Billy knows how to win at the sand drags, but like the many drag races he’s competed in this year, the team gets better with every pass, utilizing a new trick supercharger from the Blower Shop. (8-1) Marc Meadors – “Fuel Curve” ’70 Camaro – Goodguys President is back and with Championship winning Crew Chief Jim Basko, made a solid pass in testing this week, but a brand new team for this event.  A dark horse with all the right parts and pieces. (8-1) Tim Nemeth – “Iceman” ’78 Trans Am – A strong Canadian racer who has all the right racing parts and if you see veteran nitro tuner/builder Donnie Couch in their pits, could go rounds and have an epic time together. (9-1) Rian Konno – “Kazanjian Lemon & Konno” ’73 Ford Mustang – This funny car has improved with guidance from Roland Leong, who recently left the team. They’ve been stuck in the 5.80’s, but awesome reaction times got Konno extra rounds at the Good Vibrations March Meet this year.  Racing in the memory of longtime friend John Egan. (11-1) Cory Lee – “Pedaler” ’79 Dodge Challenger – Driver Cory Lee and veteran, winning owner Gary Turner are back together, but not much racing in the past year, these guys race well together. (12-1) Mike Halstead – “Code Red” ’78 Chevy Camaro – Owner/Trucker Lee Jennings has raced Top Fuel and Funny Car for years and is a crafty tuner he loves to kick some ass with proven knowledge. Halstead is a confident driver and should qualify well. (13-1) Justin Taylor – “Evil Wicked Mean & Nasty” ’73 Ford Mustang – Justin is a second generation to father and safety supplier Dennis Taylor,  A work in progress with a lot of heart. (15-1) Jeff Utterback – “Pisano & Matsubara” ’73 Vega – This classic funny car is owned by Danny Pisano and not often raced, but Jeff will put on a show. Stop by the pits and see this one! (15-1) Jon Capps – “Smokey’s Dark Side” ’79 Dodge Challenger – Owner/Tuner Smokey Alleman knows what he’s doing and with driver Jon Capps tested will this week, these guys are crafty and should qualify. (15-1) Rick O’Rogers – “Fighting Irish” ’74 Chevy Camaro – Great looking classic team and legacy name, trying to get into a tough field with a dedicated team, owner Charlie O’Neill has been through it all. (15-1) Shawn Van Horn – “Choo Choo Mama” ’78 Pontiac Firebird – these former fuel altered racers are still learning with their fuel funny car, they have a shot at qualifying. Get your A&W Root Beer floats at their party in the pits, the best ever All of those making the picks this year had a tough time picking a solid winner, with the Cottrell/Austin & O’Brian team a clear leader, the nitro funny car racing this year has been the best in years with any of six cars making the final!

It’s always a crap-shoot to make these picks, but based upon our observations during this awesome racing year, this is the list in the real 805 (Area Code). Remember, its very tough to make money in drag racing, but sometimes you can make a couple of bucks in the grandstands, betting with your neighbors.

Good luck racers, it’s going to be a dog fight!