No Blower, No Problem: The 475hp 2020 SRT Durango Is An All-Wheel-Drive Family Truckster And Entertainment Center 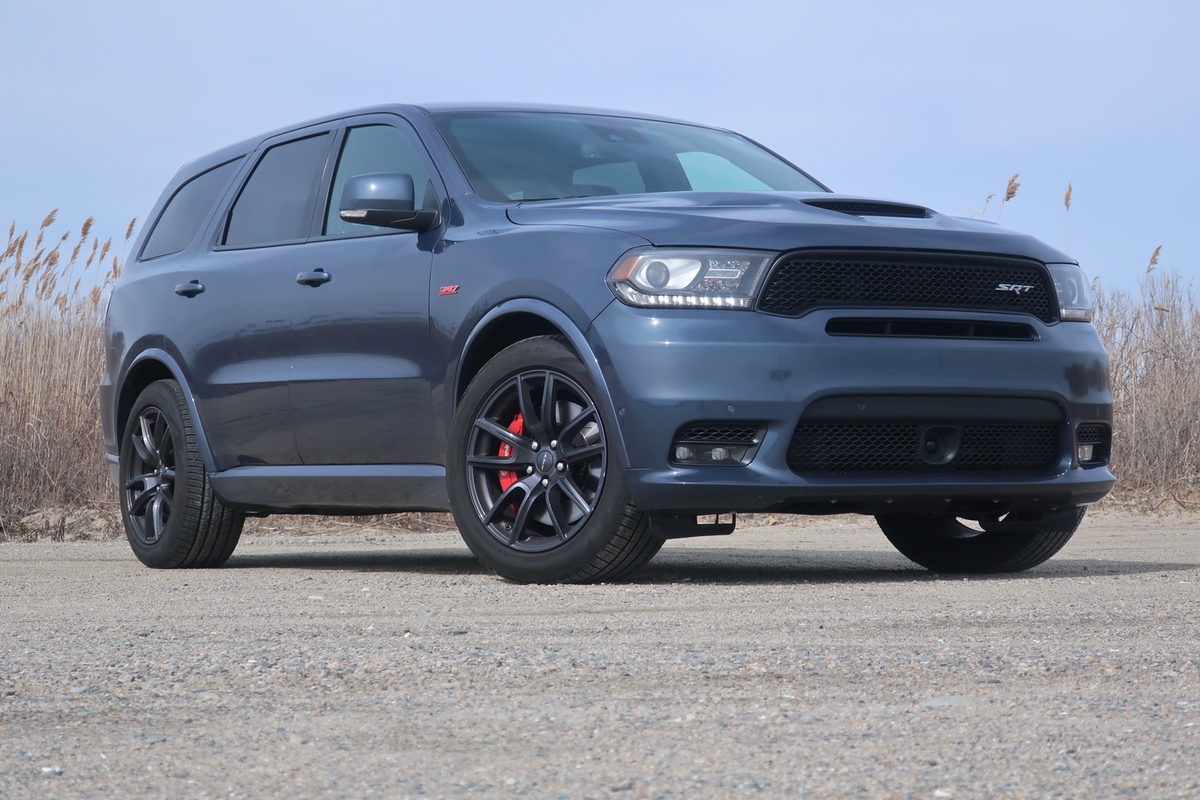 A few short weeks ago I told you about the fun I had spending a week with a 2020 Jeep Grand Cherokee Trackhawk. It’s the big daddy of high performance SUVs in the world today and it’s about $100,000 out the door from the fine people at Jeep. If you are hankering for a performance SUV with V8 rumble, sub-5 second 0-60 times, and third row seating boy do I have a deal for you! I can save you about $20,000 without you giving up nearly as much fun as you think you will have to. Yes, the 2020 SRT 392 Dodge Durango is the little brother of the Trackhawk that delivers big in the departments of fun and comfort. 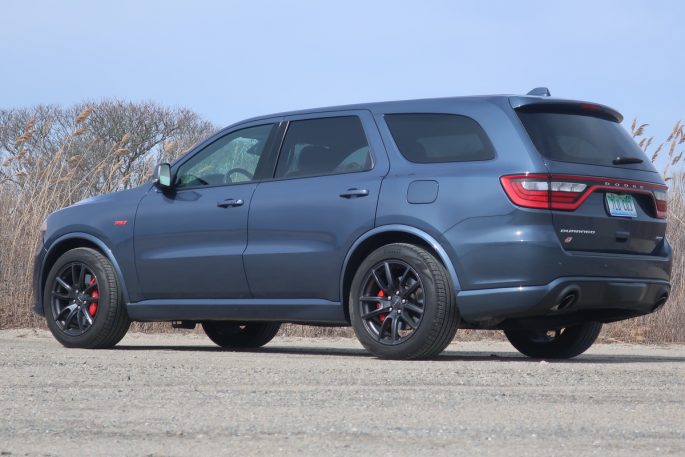 The fun comes at a less expensive rate than with the Jeep but it is still not cheap. The base price on the SRT 392 Durango is $62,995 and our well optioned test version topped the financial charts at $76,650. The good news is that if you play the game right, you can have all the fun for less than that $62,995 MSRP. How? Well the only true performance update this Durango had was the Brembo brake package ($1,295). The rest of the price tag was made with technology and comfort options. Things like the premium 19-speaker stereo, suede seats, and sunroof add up quick. They also add to the girth of the Durango, so if you play it right and keep the option list short, you are going to have a lighter and faster version of an already quick SUV. 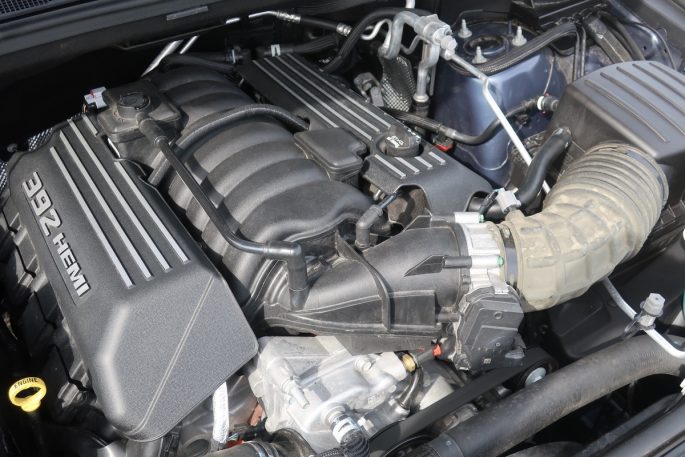 That’s where the fun is, right there. 6.4L of naturally aspirated Hemi making a “factory rated” 475hp. We have never seen one of these on a four wheel dyno so we’re not 100% sure how thrifty that factory rating is but to move all this weight as quickly as it does, 475hp seems like it would be too thin. This engine has been a mainstay of the Scat Pack Challenger and Charger for years as well as in various SRT versions of Dodges for a while. It’s great. It loves the 8-speed automatic behind it and between our driving style and physics, it was hard on fuel. We got a combined 13mpg driving this rig for the week. It was fun and thirsty, mostly because it was fun. I think the SRT Durango sounds better than the Trackhawk. I think that the Scat Pack cars sound better than the Hellcats. This thing has a great bellow and when downshifting the engine it sounds really good. It’s 80% as loud as the blower engines but the tone is more pleasing and there is less rasp. My opinion only but this thing really sounds good. Also, the 5-year, 60,000 mile warranty is pretty awesome on performance cars like this one. That’s a quality move, Dodge. 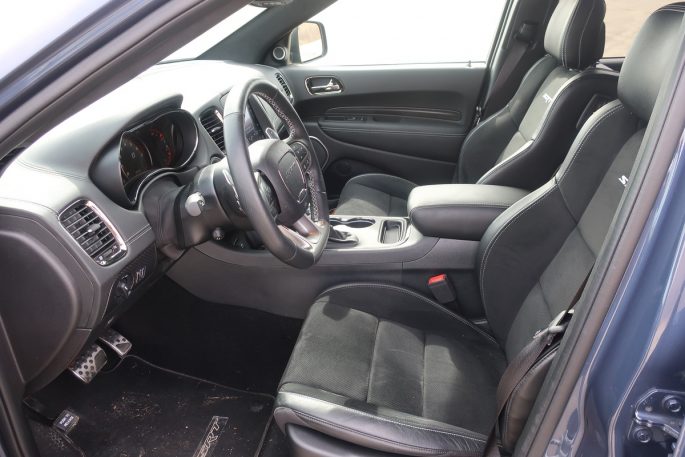 There are zero surprises in a Durango SRT 392. This truck shares a lot of its underpinnings and stuff like the interior with a Jeep Grand Cherokee. As mentioned, there were upgraded materials and surfaces in the Durango which were nice but for the increased cost, I don’t think they are worth it. The driving dynamic of the Durango is not nearly as aggressive as the Trackhawk in terms of lateral performance. The 20-inch wheels and 295 tires are good but not nearly as good as the Pirelli P-Zeros that are on the Jeep. The ride was good and once again, like the Jeep the driving experience can be configured through the touch screen. As with the Jeep we had the engine and transmission settings in Track and the suspension in Street for the best of both worlds. The stiffened “Track” setting did not deliver the firmness that the Jeep’s did i our perception but that likely goes back to the tires again. 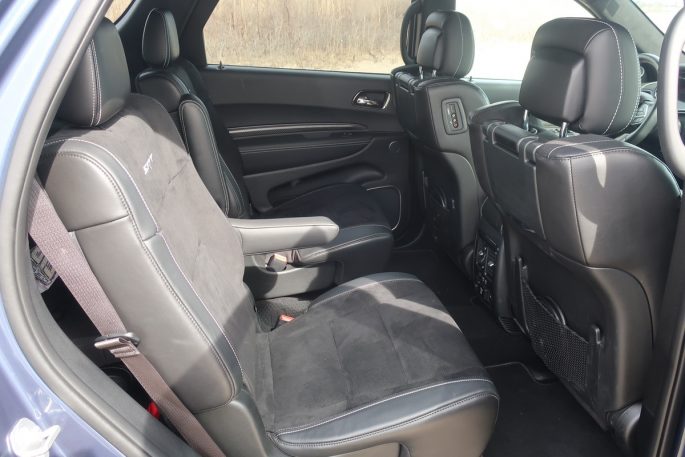 Rear bucket seats had the kids happy and while they did not use the screens or supplied wireless headphones, they were were if they waned them. There are input jacks in the sides of the seats as well so if you really wanted to get with it, both kids can watch their own stuff on their own screen. We always encourage the guys to look out the window and engage with the world but on a really long trip these screens are good as we found out a few years ago. 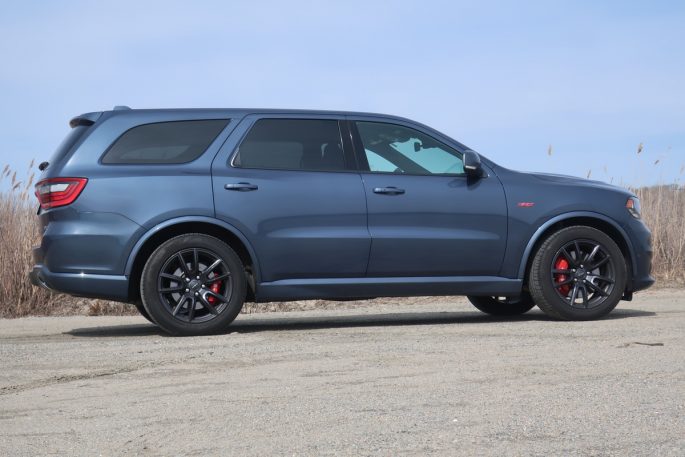 The lines of the Durango are cool and the fact that the only real callout is the single 392 badge on the fender is the best part. Because you can option basically any of the stuff on this Dodge on a normal Durango, including the addressee hood, pulling the fender badges off could net you some good entertainment if you wanted to shock some potential stoplight or drag strip foes. The all wheel drive makes launches awesome and 4.4-seconds to 60mph is legit no matter what you are driving and perhaps doubly so in a truck like this. This color is Reactor Blue Pearl and we really like it, especially with the red 392 badges and the red brake calipers. If you can call a 475hp SUV restrained, that’s what this one is visually. 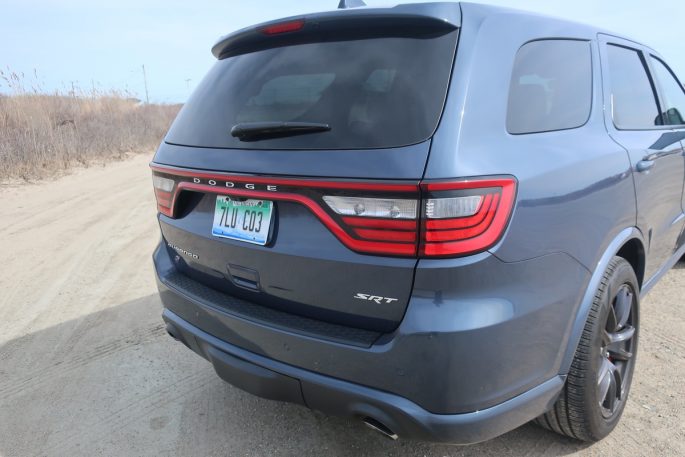 Nothing really dramatic happening on the back of the Durango and that’s OK with us. The only real fun here is the rumble out of the exhaust. It is neighborly quiet at idle and then openly roaring when you hammer the pedal down the street from your ‘hood. 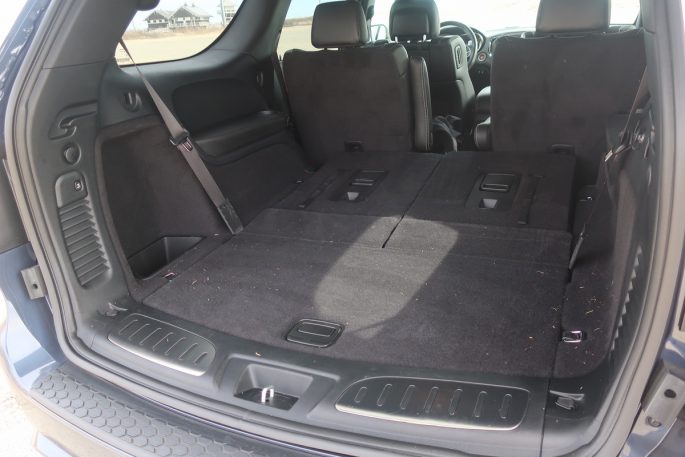 Room? This thing has room for days. Yes, it also has third row seating, something that the Jeep Grand Cherokee does not have. One of my most major complaints with the CUV “crossovers” is the fact that they suck at pretty much everything. They can’t fit stuff in the back, they don’t have great passenger room, they don’t get great mileage, and they don’t have any notable performance. SUVs this size? You have the room for people and stuff actually making them useful. The 475hp is a bonus and even with the stock 3.6L engine, the Durango does get out of its own way…just not like this one. 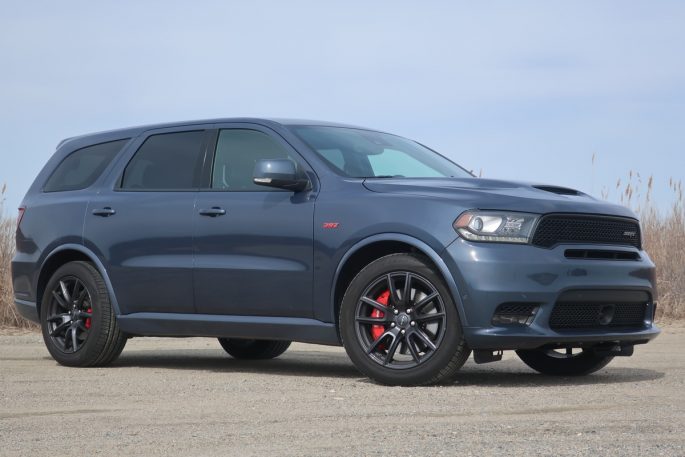 No, We Did Not Forget About AMC! We Celebrate The 401 V8 Here! QuarantinePiece Theater: BURNOUT - This 1979 Drag Racing Movie Is So Awful It Rules

5 thoughts on “No Blower, No Problem: The 475hp 2020 SRT Durango Is An All-Wheel-Drive Family Truckster And Entertainment Center”