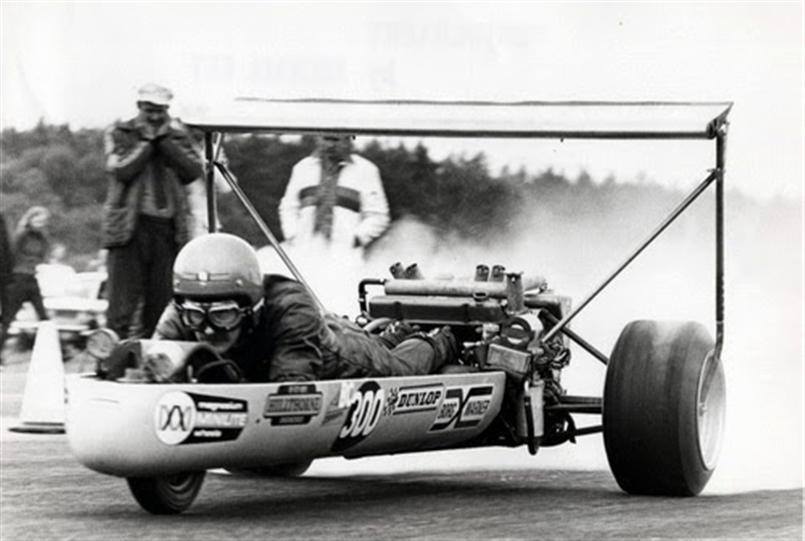 Everything in life starts out as an experiment. When you were crawling and saw the spring doorstop, you wanted to see what would happen if you played with it. After several minutes of springy noises and one irritated parent later, you knew how it worked. If you had never tried that green devil paste known as wasabi in your life, you participated in an experiment that left your eyes watering and your mouth aflame. Experiments either prove or disprove a theory…it’s the point where an idea is tested into reality, one way or another. Drag racing’s early days are full of experiments: the high-riding gassers like the Stone-Woods-Cook cars, the funny cars, anything with a Turbonique strapped to the rear axle. All experiments, all trying to prove a theory.

In the British Drag Racing Hall of Fame are three racers that together compsed McCoy Dynamics: Angus “Ag” MacPhail raced motorcycles when he wasn’t working on other projects (like the Ford GT40 project in the Slough offices and his impromptu bomb-making mischief) and was the mad genius who built and raced the machine in the lead photo, a three wheeler powered by a Ford engine before he moved up to one of Britain’s most well-known machines, the Jade Warrior. Mick Hand was another bike racer, who turned a 250cc Honda into a blown, psychotic wasp of a machine capable of running in the very low nine-second range. Keith Parnell made up the trio, a Triumph racer who was the first to put a European bike into the eight-second range at Santa Pod in 1975.

MacPhail’s Ford trike would wind up banned from competition, but the Jade Warrior, a re-engineering of the prone-position Ford-powered monster that was now on two wheels and was using a 1,000 pound ground-effects system that was driven by the exhaust, was notorious. The 2.0L Ford Cosworth four-cylinder was probably good for up to about 500 horsepower and an eight-second quarter without the need of nitromethane. With the front half of his body inches from the ground and almost all the way forward on the Warrior, MacPhail was in a position most people only see when they ride front-first on a sled down a snowy hill. Eight seconds, 200 MPH. His kibbles and bits were composed of pure titanium.

MacPhail would live beyond the Jade Warrior’s prime years. He would retire from racing, and would live into his eighties. Sadly, MacPhail would be just one of many victims of the pandemic, succumbing in April, 2020. May that be a testament to the engineering he put into machines that looked purpose-built to cause grievous bodily harm, machines that he himself claimed were very easy to control at the limit.