After The Crash: Jeff Lutz ’57 Chevrolet Gets Torn Down, And The Rebuild Begins 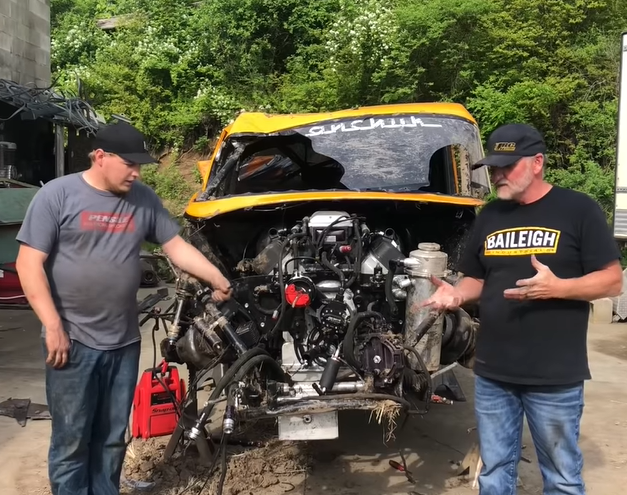 A couple of months ago everyone in the drag racing and street racing worlds heard about Jeff Lutz and his horrific crash in his famed yellow 1957 Chevrolet. Jeff was hurt, but not nearly as bad as he could have been, and doctors were very happy to see him recovering quickly. Early reports on his condition had scary words about neck injuries that made things sound potentially horrible. Luckily that was not the case, but the same could not be said for the venerable ’57. This poor bastard was torn up real bad.

But building cars is what Jeff Lutz does, so there was never any doubt that he’d either fix this car or build another one, and in this series of videos you are going to see Jeff and the ’57 as he tells us about the crash, the damage, and the plan before showing the new car that will become his new race car. In the second video, you also get some history of ’57’s that came before this one, so you can learn a few things if you have only known about Jeff since the TV show started. He’s got quite a bit more drag racing history than that and his cars are well known in many circles.

Check the videos out below!

Finnegan's First Burnout In His C10! Wait, What? How The Hell Has It Taken This Long To Do Burnouts? 1978 Rally Nova For Sale With A Small Block And Rock Crusher Muncie 4-Speed And More!

8 thoughts on “After The Crash: Jeff Lutz ’57 Chevrolet Gets Torn Down, And The Rebuild Begins”