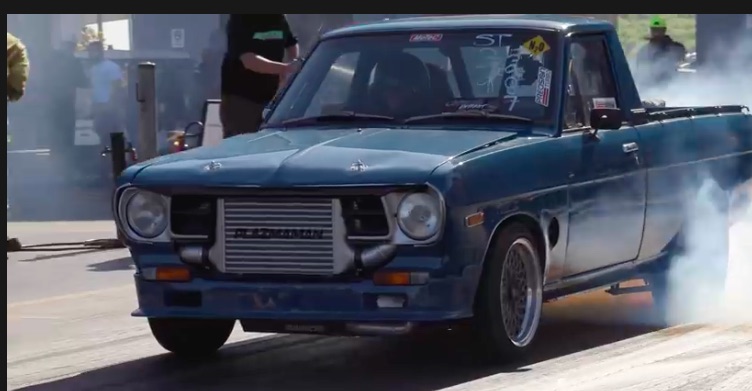 It was of course the great Colin Chapman who defined his philosophy on race car building as “simplify and add lightness”. If we met the owner of this awesome little Datsun truck in Australia we’d as him for a dna sample to see if he and Chapman might be related. The guy has taken the lightness and simplicity formula to an awesome plae with this truck. The little Datsun uses a 1.6L Toyota engine that has been stroked to 1.9L, all kinds of boost from a single turbo, a Ford C4 transmission, and leaf springs out back to run 7.90s in the quarter mile. Oh, we totally forgot another part…ON 225 WIDTH REAR TIRES!

We love a rig like this because it really does exemplify the modern hot rod in so many ways. Yes, you have the classic wrapper but then everything inside of it is cool and well thought out, and perfectly functional. From the MoTec computer controlling the engine to the modern fuel system using multiple sets of injectors to feed the little engine as much e85 as it needs, we’re loving this truck.

Drag racing on 225 tires in a class that allows a 275 is baller, right? We’re guessing whatever differential is under the truck might be stock width and getting the bigger tire into the tiny wheel wells may require surgery they do not want to perform at the moment. We love every second of it.

How does it leave? 1.21 short time which is not top fuel stuff but it is also not a school bus either. Shortly after the 60′ mark the power shows up and this thing flies!

Press play below to see this little truck crank off 7-second runs on 225 tires!

Jumpin' Through Hoops: Watch This Vortec Blown 427ci Windsor Small Block Get Perfected On The Dyno Rocky Mountain Race Week Is On! We've Got Photos And A FREE Livestream Of The Entire Race Right Here!