FREE LIVE RACING – Footbrake Racers Are Getting It On! The Bigfoot $75,000 Footbrake Only Race Starts Today! 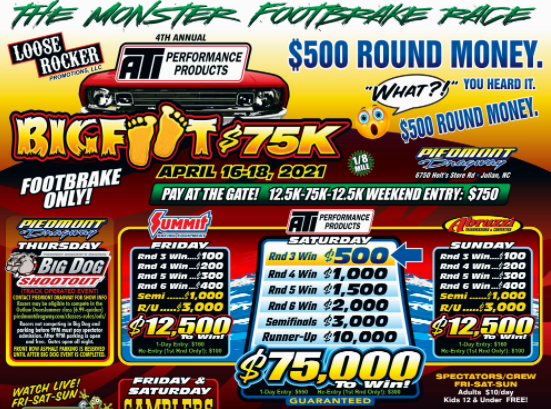 We all know that big money bracket racing has gotten bigger, and richer, and more exciting over the past few years, but one of the coolest things is the embrace the racing community has given to bottom bulb racers in all this. Recognizing that bottom bulb racers who can cut a .00 light and run dead on at the stripe are arguably even more bad ass than someone doing so with a brake and a delay box, means that they deserve a place on the stage. More and more big money races are giving bottom bulb racers their own eliminations rounds until they get down to one, and some of their own shootouts as well. But within the bottom bulb big money bracket racing community is a special group. Footbrakers.

With no trans brake, anyone that can go .00 and run dead on the number swapping feet at the green is a bad ass in our book. Apparently the rest of the world agrees, because there are more and more footbrake classes and events being put on than ever. It gives bracket racers, and NHRA Stock and Super Stock racers, the chance to put on a show and go for big money.

This weekend’s Loose Rocker Promotions Bigfoot $75,000 race is for footbrake racers only. Not a trans brake in sight, and money starting to fly at just round 3. Oh, and if there are enough cars to make 10 rounds happen then the purse goes up to $100,000! 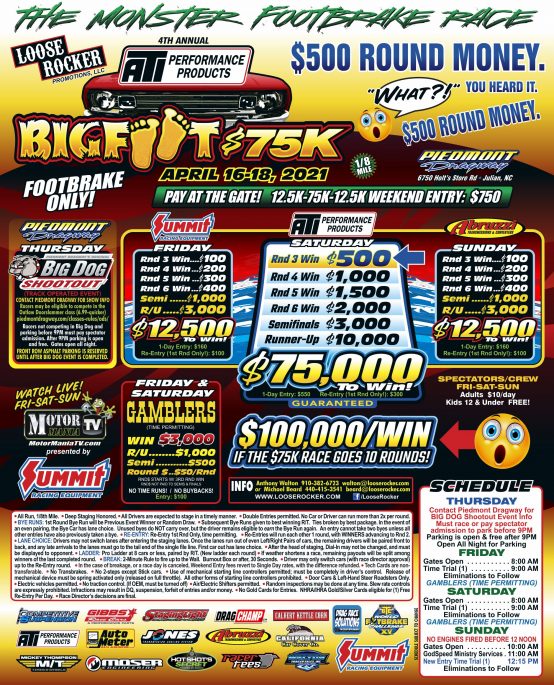