John Force Burns Down His Funny Car Like The Old Days, And That’s Not A Good Thing! 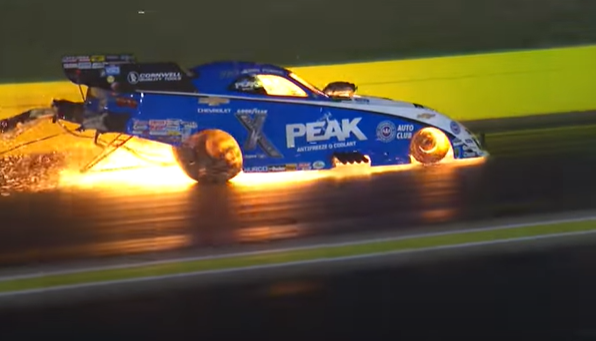 When you think of the good old days of John Force, you think of two things, big giant smokey burnouts, and blowing up at the top end and going through the finish line on fire. It’s not funny, but it’s true, because John Force tore up more cars than just about anyone on his way to all those wins. In fact, it would be interesting to see just how many cars John Force had to drive to get those wins. From fires to crashes to fires that ended in crashes, he’s done it all and he hit the replay button this past weekend in Ennis at the Texas Motorplex. I was in the stands when he left the starting line WAY behind Jeff Arend in the second round of qualifying, and at about 400 feet things start going wrong. By the 1/8th mile parts were starting to come out of their homes and by 1,000 feet the thing was fully engulfed in flames including the drivers compartment.

Luckily Force was able to stop the car and climb out, but it was certainly a hot and hectic ride. He’s okay, thankfully, but I guarantee this is not the type of highlight reel John wants to be a part of anymore.

Once word got out that he was okay, talk around the pits was that the old man was trying to show off like in the old days so that nobody else would make the headlines this weekend.

Watch and be amazed.

Puddin Takes The Mini UHaul For It's First Drive in 20 Years, But It Wasn't Easy! This Classic Toyota Celica Is Powered By A Turbocharged Lexus V8 And It Cooks!

3 thoughts on “John Force Burns Down His Funny Car Like The Old Days, And That’s Not A Good Thing!”