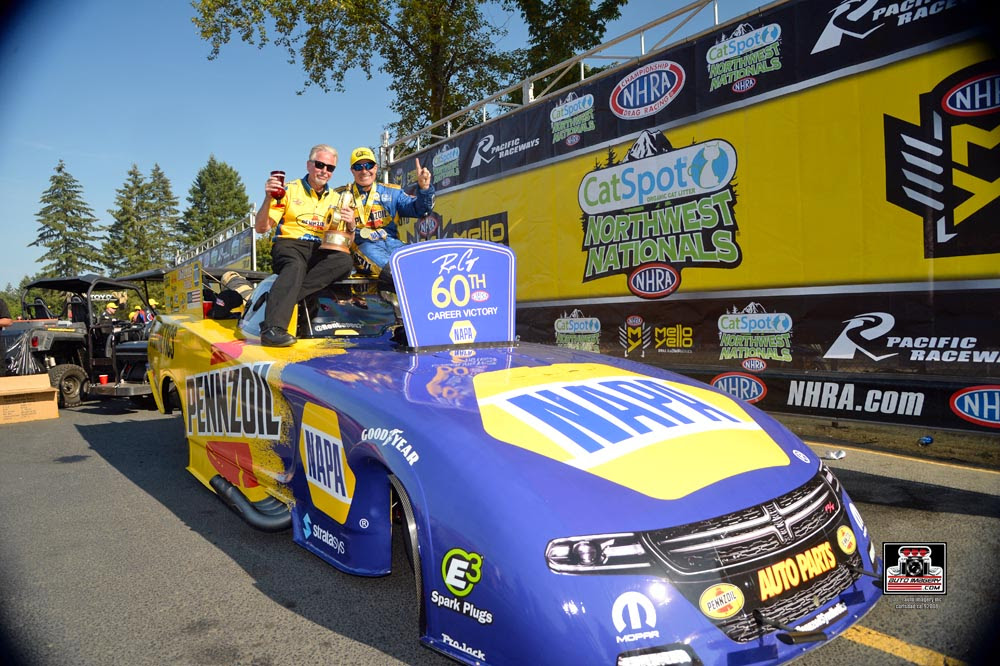 Rahn Tobler is one of the cooler nitro crew chiefs in the NHRA ranks. I say this because he’s got some of the coolest experiences, working with some absolutely epic drivers and crews. Plus, he’s got an air about him that’s different than some crew chiefs. When my late wife Daphne got out of the hospital after nearly a month inside on and off a ventilator, getting thoracic surgery, and then brain surgery, all she wanted to do was go to Pomona for the World Finals. She had brain surgery just less than three days before, and thanks to awesome friends like Ron Capps, Tim Andersen, and Todd Payton, we were able to get there and be comfortable on a golf cart. We had VIP passes into the NAPA Funny Car pit thanks to Capps, and while standing in line to get some food Rahn walked up to Daphne and said something about one of the dishes being good and telling her he was so glad to see her out there. They talked for just a few moments, but it made her feel so thankful. Rahn was just one of a bunch of people to do the same thing that day, but I’ll never forget it and either did she. Capps will tell you that Rahn is most certainly one of the good ones, whether tuning or just being a good human being.

On track he’s got 70 national event wins and both Top Fuel and Funny Car Championships under his belt over a 40 year period. Not many crew chiefs can claim to be relevant for that many years. His career is storied and memorable and he will not be forgotten anytime soon.

Rahn has decided that it’s time to end the fun and excitement of racing, and to enjoy retirement with his wife Ellen. After winning with the likes of Shirley Muldowney, Cruz Pedregon, and Ron Capps behind the wheel, along with stints at Kalittas, it is hard to feel bad for him even though we will all miss him in the pits.

Here’s the official announcement from DSR, along with words from both Rahn and Capps about their thoughts and memories.

BROWNSBURG, Ind. (January 21, 2021) – Rahn Tobler, crew chief of the NAPA AUTO PARTS Dodge Charger SRT Hellcat driven by 2016 NHRA Funny Car champion Ron Capps, has made the decision to retire from racing and will depart DSR at the end of this month. Tobler, 66, has enjoyed a successful NHRA career that spans nearly 50 years, including 11 years as a member of the Don Schumacher Racing family. Since 2012, Tobler and Capps have worked side-by-side where they were successful in capturing 33 victories, including Capps’ milestone 60th nitro triumph and the 2016 Funny Car title.

Tobler began his drag racing career in 1971 and has won 70 national events and four world championships. In addition to his 2016 title, Tobler’s other championships include the 1980 and 1982 Top Fuel titles with Shirley Muldowney, and the 2008 Funny Car championship with Cruz Pedregon. Tobler plans to enjoy his retirement in Southern Calif. with his wife, Ellen. His successor to take over the reins on the NAPA Funny Car will be announced at a later date.

Quotable:
Rahn Tobler
“It’s been a very storied career. I never thought when I started in 1971 with Dick Venables Sr. working with a local Top Fuel team in Houston, Texas, that I’d still be doing this almost 50 years later. I’m very fortunate to have worked with so many successful team owners and wonderful people. I think back on Shirley (Muldowney) and the success we’ve had, my time with the Kalittas, and Cruz (Pedregon), but I’d have to say, the best part of my career has been these last 10 years at DSR.

“Don Schumacher has given me so many unbelievable opportunities to be successful. Ron (Capps) and I had an incredible run. To win 33 races over what was almost nine seasons, and winning the championship in 2016, I’m just so proud of what we were able to accomplish; what a way to go out. But, winning aside, what I’ve enjoyed the most and also what I’ll miss the most is the people. I’ve made so many great friends along the way, but I’m especially going to miss my crew guys. They’ve become family. We would do things away from the track together, fun things on the road and back at home, I got to know their families. Without a crew, a crew chief is nothing. If you don’t have that strong group behind you, you won’t be successful.

“I’m very fortunate to have worked in an industry that I’ve enjoyed every single day, but I’m now looking forward to this next chapter in life. My wife, Ellen, and I will be moving to Huntington Beach. That’s been our plan all along. She’s a Southern California girl, and when we first got together, I promised her we’d go back to Huntington when it was time to retire, and let’s be honest, it’s not a bad place to retire.”

Ron Capps
“I’m heartbroken that our time racing together has come to an end. We’ve had such a great amount of fun, and became such great friends away from the race track. In the eight-plus years, the amount of races that we’ve won, and great moments we’ve spent together is just really incredible. We set the national record within a first few races together at Englishtown in 2012, won the championship in 2016, and then to run that 339-mph pass in Reading in 2019 was awesome. There’ve just been so many great moments.

“Very happy that he’ll be able to go off and enjoy his retirement and spend time with his lovely wife, Ellen. He deserves it. He’s been involved in the sport of drag racing since his teenage years, so this chapter closes, and a new one opens for him.”

Don Schumacher
“We’ve had a great run with Rahn, and while we are sorry to see him go, we understand and support his decision. He won a lot of races for DSR and NAPA over the years and was an integral part of our organization. He’s a true champion and leaves this sport as one of the most respected names in our industry. We wish him the best of luck as he embarks on a slower-paced lifestyle away from the dragstrip.” 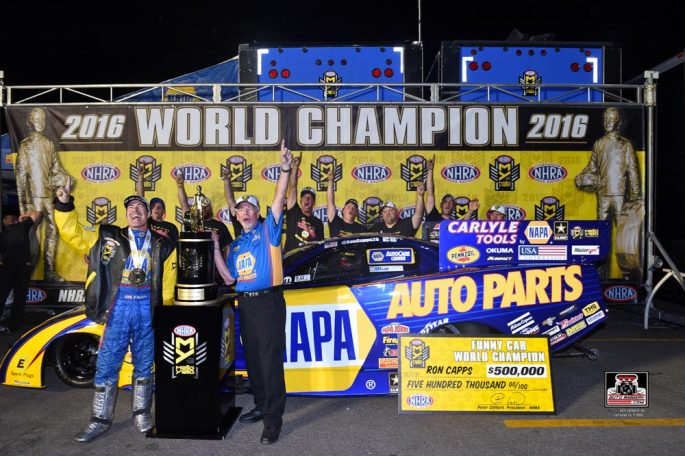 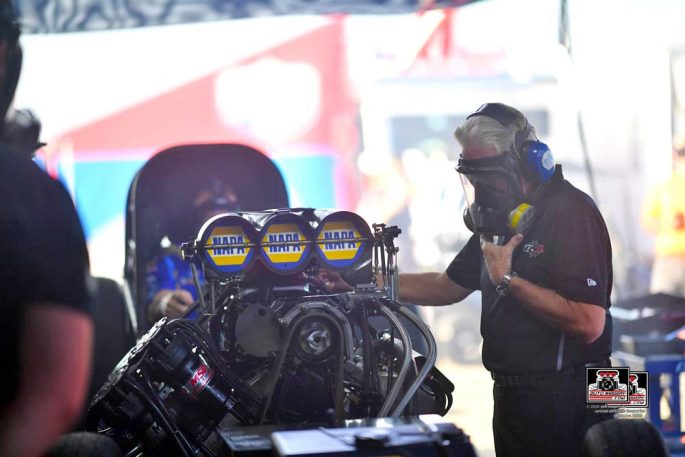 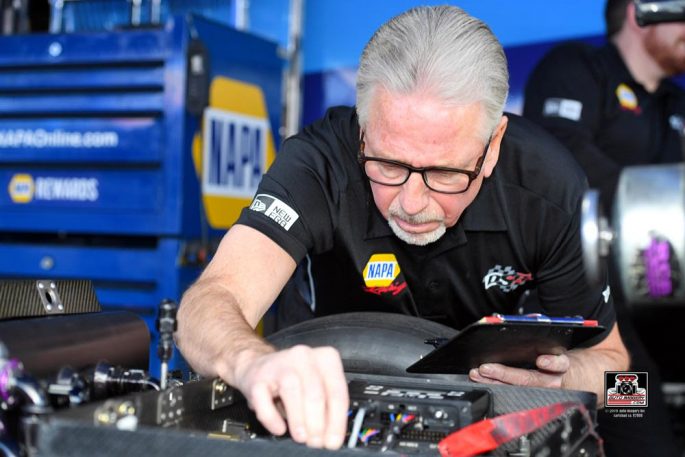