Meet Bowser, The Nitrous Huffing 474 Cubic Inch LS Powered Datsun With A 92 Inch Wheelbase And A Ton Of Attitude! 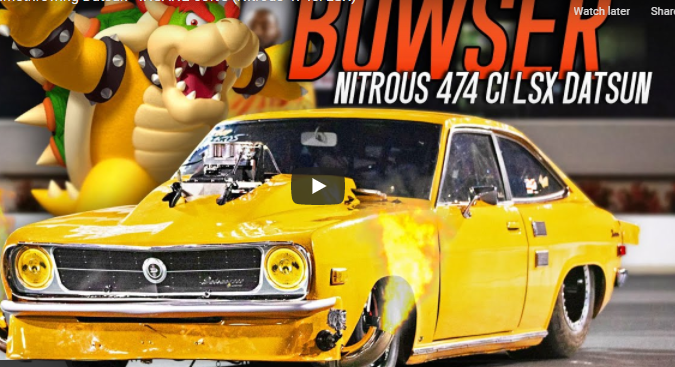 I love alternate body styles. Ever since the “Dare to be Different” phase that started in the early 1990’s it has been cool to see someone take a different body style and do the norm to it. What’s done to this Datsun would be perfectly normal if it were a Mustang or a Camaro, but because it is this weird Datsun body instead it garners all kinds of attention and is outside the norm. We love that. The lines on this cool little import, and many like it from the 1960s, 1970s, and 1980s, make them a cool little race car. But little is the key word here as some of these are truly tiny. This one here looks proportional, but when you slide it over next to a Fox body Mustang it becomes little in hurry. With just a 92 inch wheelbase, that’s over 8 inches shorter than a Fox body Mustang. Think about that for a second. But what impresses us most about this one isn’t just how quick it is overall, but the fact that they have it working like a champ on the drag radials and going 1.0 seconds to 60 ft. That is insane quick and super fun to watch. Here’s the video.

Here is the video description from Kyle and the gang at 1320Video:

This car used to have about 80 horsepower from the factory and now it’s going 60 feet in 1 second! Bowser is a nitrous car that doesn’t mess around. He really Dominated this year at Street Car Takeover Charlotte and we hope to see this car in the near future!

2 thoughts on “Meet Bowser, The Nitrous Huffing 474 Cubic Inch LS Powered Datsun With A 92 Inch Wheelbase And A Ton Of Attitude!”