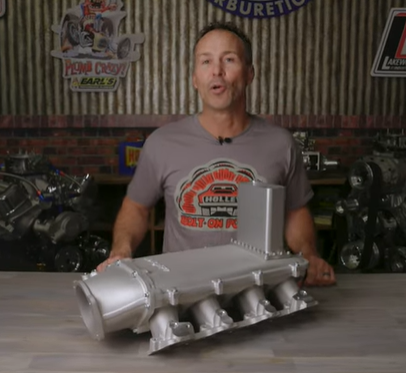 Holley’s Lo-Ram Intake for LS engines is the no holds barred boost ready intake that every LS swapper has influenced. When Holley took all the feedback from users of their famed Hi-Ram and Mid-Ram intakes, threw it into a bucket and swirled it around, the result was the new Lo-Ram intake. Available in two configurations, with a top mount and front mount throttle body, the front mount is available with dual injectors and an SFI Burst Panel for those making really big power on Methanol or E85. It sounds like the perfect combo to us, and we dig it.

For those of you not familiar with burst panels, they consist of a thin panel of metal that is specifically shaped and designed to burst open at a specific pressure. They are available in different burst pressure ratings and are easily swapped out based on needs. Burst panels are common place in the intake manifolds of blown cars, and can be found on the most big power turbo cars in the racing world as well. Ron Shearer, Pro Line, and other ultra high end intake manifold manufacturers incorporate burst panels, but you never find them in intake manifolds like these from Holley.

In this video you’ll learn just how to install one from the guys at Holley, along with there burst panel ducts.