DeWALT Highlights ‘Made In USA’ With Kalitta Motorsports 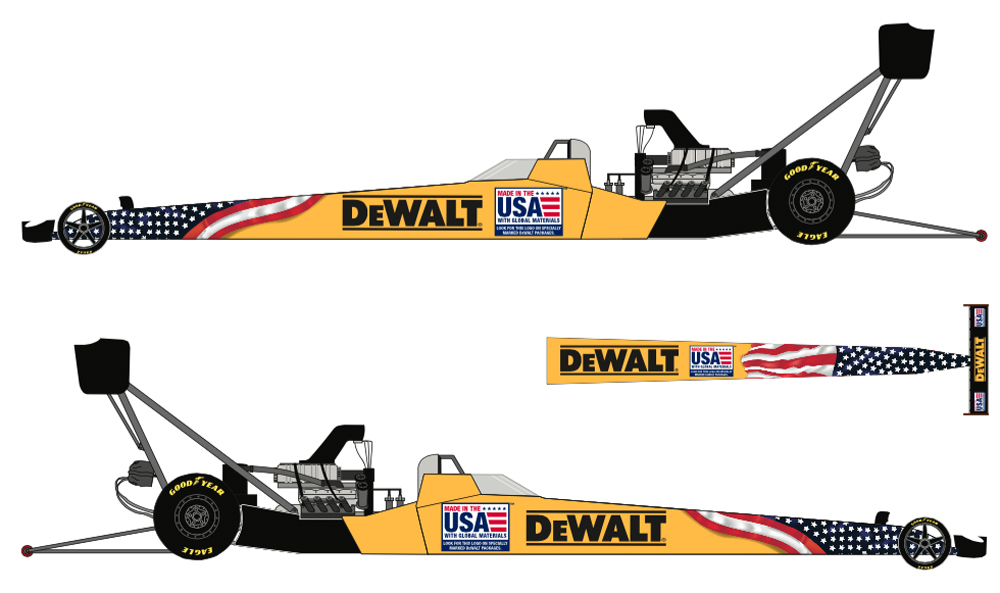 “I am honored to fly the colors of DEWALT Made in the USA with global materials during NHRA’s biggest weekend,” said Kalitta. “Both DEWALT and Mac Tools do a lot to employ American workers, and it is awesome to be able to highlight this program, especially on Labor Day weekend.”

With the expansion of the nearby Greenfield, Ind. facility, DEWALT now has seven manufacturing facilities across the United States. In 2014, DEWALT made approximately 62 million units of individual products in the United States with global materials. Approximately 500 new jobs have been created to make these products. DEWALT also has a strong connection with the U.S. military; they currently employ over 1,000 former service members.

On Wednesday, September 2nd, the Mac Tools Top Fuel dragster will transform into the DEWALT Made in the USA with Global Materials Top Fuel dragster on the Greenfield, Ind., shop floor starting at 3 pm EST as it’s wrapped with its vinyl design right in the heart of the facility.

The celebration will continue Friday, September 4th, at 4 pm EST, as DEWALT will spotlight its partnership with Wounded Warrior Project® (WWP). With guests of the organization looking on, DEWALT executives will unveil a new Harley-Davidson motorcycle that will be auctioned off later this year at the Barrett-Jackson auction. Proceeds of the auction will be donated to support WWP. Media is again welcome and encouraged to attend the unveiling trackside at Indianapolis Raceway Park within the Mac Tools/Kalitta Hospitality.

Kalitta, who currently holds a top five position in the point standings, will take the DEWALT Made in the USA with Global Materials Top Fuel dragster to the track for the first time on Friday, September 4th, at 7pm EST for the first of five qualifying sessions. Kalitta and his team will also be a part of the Traxxas Shootout, which runs on Saturday, September 5th. Final eliminations for the U.S. Nationals begin on Monday, September 7th, at 11:00 am EST.