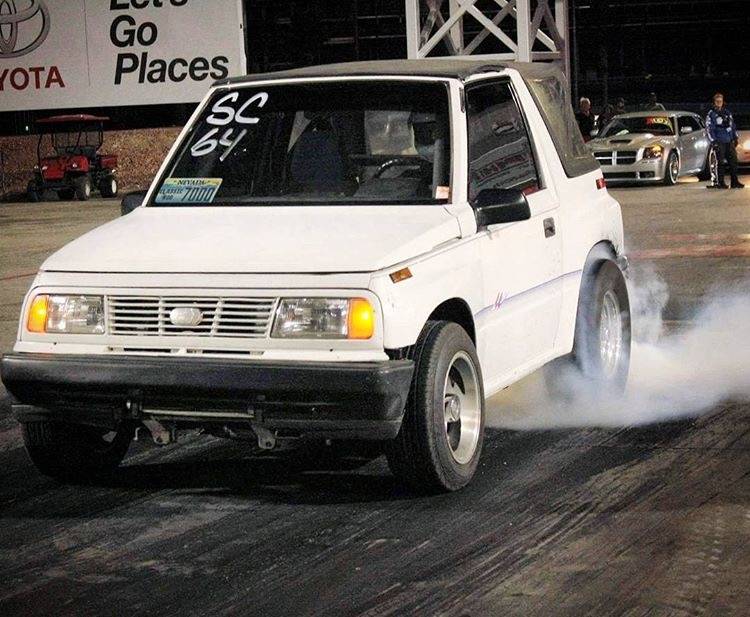 Sleepers are cool, and this one qualifies because there is nobody who would think this thing could run a 12 let alone a deep 9 second ET. And the cage has an 8.50 NHRA Cert so you know it is ready when you decide to step on it with a bigger turbo. Oh yeah, it’s got an LS Turbo swap! The 6.0 has a few parts to make it boost ready and is clearly making power even with the small turbo mounted underneath. Up front it looks like it is just a normal LS Swap, and most folks would have no clue there was boost on board.

If it were ours we’d change the stance a tiny bit, narrow up the rear, and put on a set of wheels that would hide its true intentions. What do you think?

Here are all the details from the seller: CLICK HERE TO VISIT THE ORIGINAL AD

One of a kind, LS swapped, turbocharged 1993 Geo Tracker sleeper. Runs 9’s and does wheelies. If you go to the strip very often, you are probably already familiar with the car as I have raced it much over the last few years. It turns a lot of heads and gets attention anywhere you go with it. There are countless videos of it on youtube and facebook. One of which has 800,000+ views. See it here: https://www.facebook.com/vitaraporpiezas/videos/1729866443735127/

This car is totally streetable. It has literally NEVER been on a trailer. I drive it to work, the drag strip, and then drive home. It is often the quickest car that drives to the strip on a given night. It has been extremely reliable.

Engine:
The LQ4 engine has been upgraded with LS9 head gaskets, head studs, a BTR stage 3 cam and springs. The oem LQ4 intake made for perfect placement of the ported throttle body to clear the intake and just barely clears the hood. I had a CTS-V engine cover from a former project and with some trimming it looks right at home. Exhaust manifolds are from a LS7 Corvette and tuck nicely between the factory frame rails. The engine is mounted with universal LS mounts from Dirty Dingo.

Fuel system:
The fuel system is setup for E85 with a flex fuel sensor which eliminates the need to retune when the alcohol content changes. A Kenne Bell Boost-A-Pump supplies voltage to a Walbro 450 in the factory fuel tank. The fuel is fed through stainless -8AN fuel line with an E85 compatible fuel filter to the 80lb Siemens Deka injectors.

Transmission:
The transmission is a heavy duty 4L80e with a Trans-Go HD2 shift kit and a custom made torque converter from PTC. A remote transmission cooler with a dedicated fan keeps fluid temps in check.

Turbo:
The turbo is a mid-mounted ON3 7875. It is mounted just behind the transmission and has a 50mm wastegate on the turbine housing. Boost comes on fast and hard. The exhaust exits the factory location just behind the left rear tire.

Engine control:
The engine and trans are controlled by a factory GM PCM tuned via Hptuners. There is a MSD two-step which makes for consistent 1.5 60′

Suspension, brakes, rear axle, tires:
The front suspension is mostly stock with some new struts and spring spacers to make up for the added weight on the nose. The rear features stock suspension grafted to a 8.8 Ford rear axle with 4.11 gears and a limited slip differential. A heavy duty rear sway bar was added to keep the car launching straight and flat. The factory front disc brakes combined with Ford Explorer rear disc have no problem stopping the Geo from 135 mph. Rear tires are Mickey Thompson 275/60R15 drag radials.

Safety:
The driver’s seat has both the standard seat belt for city driving and a 5 point harness for racing. An 8 point roll cage was installed by Goff Motorsports Fabrication. The cage was just certified for 8.50 in the 1/4 should the need arise. A large fire extinguisher is mounted in the rear.

Body:
The body is overall straight and has the normal dings you’d expect in a 1993 anything. Some clear coat is peeling on the right rear quarter panel. I had thought about throwing a nice paint job on it, but it wouldn’t be quite the sleeper at that point. Includes both the full soft top and a bikini top.

Performance:
Best 1/4 mile has been [email protected] mph so far. Best 60 ft has been 1.45 limiting the launch with the two-step at about 3400. If foot braked with no two step, it will do a big wheelie. Has never been dyno’d with the turbo. Tuned by me, at the track.

Bottom Line:
Why am I getting rid of it? I have 3 turbo LS vehicles at the moment. I like building stuff and should probably make some room before starting a new project. Price is $14,500.

This is not a beginners car. Best for someone who has some experience with fast vehicles. No test drives without full payment in hand. Cash, no trades. 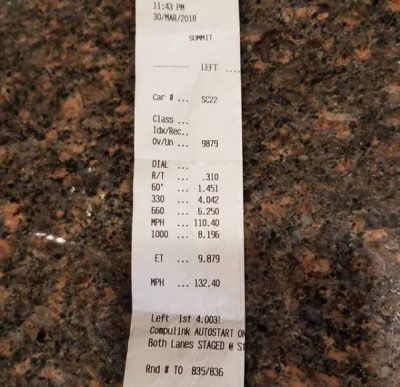 Walk around video of Geo here:

Man Finds 1970 LS6 SS454 Chevelle In Barn After Being Parked For 35 Years! Starts And Runs Smooth! K&N Spring Fling Million 2019: Hey, Buddy, Save Some Dragsters For The Rest Of Us!