How Do I Know How Big My Fuel Injectors Need To Be? Richard Holdener Gives You The Simple Math Lesson So You Can Figure It Out Yourself! 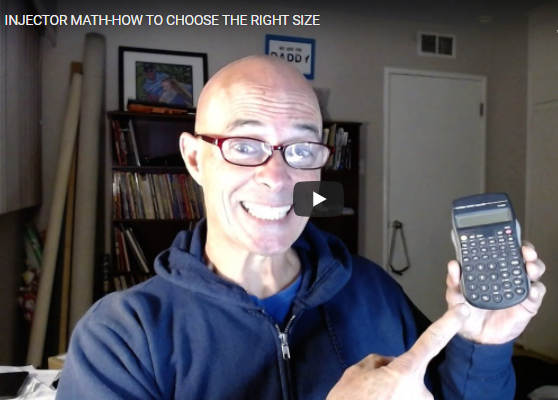 Sizing injectors for your engine is NOT rocket science, but it is crazy how many people question and argue and worry about injector sizing for their combinations. The math is pretty simple actually. Are their some variables? Sure, it is going to matter what fuel you run and if the combination is boosted or not. But that stuff isn’t what matters to get started in understanding what is going on with your fuel injectors. First off you need to know the simple math and then you can get more technical as your knowledge grows. It is still math though. Yes, some engines are more efficient than others, so yes one injector may be able to support more power in one engine than another. But, if you use math that assumes less efficiency, then you’ll make sure you are safe with an injector that will provide enough fuel rather than not enough which hurts parts.

Watch this video, which is from one of Richard’s live streams, and you’ll get it. He gives a lot of information, but it is simple math. Richard went to public school, he’s not a private school kid. So follow along, learn something, and let us know what you think.

Here is the description from the video. Watch below.

HOW DO YOU CHOOSE THE RIGHT SIZE INJECTOR? WHAT IS THE SALACIOUS 16? WHAT IS THE FORMULA TO CALCULATE HOW MUCH POWER YOU CAN MAKE WITH A PARTICULAR INJECTOR FOR A 4 CYLINDER, 6 CYLINDER OR 8 CYLINDER? HOW MUCH POWER CAN THE INJECTORS MAKE NA, UNDER BOOST OR WITH E85? IT’S ALL HERE IN THE VIDEO-SIMPLE MATH USED TO CALCULATE THE FLOW RATE VS HORSEPOWER. THEN CALCUALTE THE FLOW RATE VS HP UNDER BOOST AND THEN WITH E85.