Pit Trike Build Part 6: A Few Tweaks And Then The Wife Takes It Out For A Top Speed Run!

Mar 04, 2022Chad Reynolds1320 Videos, FUNNY STUFF, MISC, OTHER, TECH, Tech Stories, VideosComments Off on Pit Trike Build Part 6: A Few Tweaks And Then The Wife Takes It Out For A Top Speed Run! 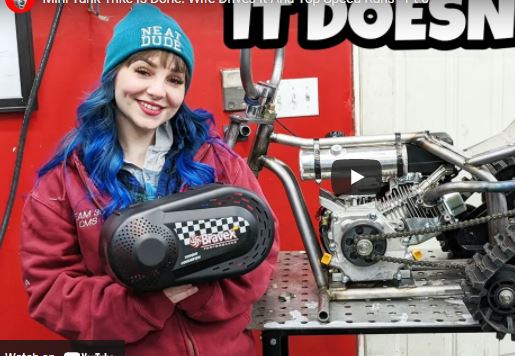 Tracks on the pit trike! Oh yeah, this is some fun stuff right here and since the pit trike isn’t as good in the snow as it could be, it needs some tracks! Keep in mind that this thing is supposed to be a pit vehicle at the drags and that means snow won’t ever be an issue for it. But because it is Canada, and snow happens there a lot, then why not make it capable of having fun all winter too? Check it out.

If you missed any of the previous videos, use the link below to watch.

Having a pit vehicle at a race is a must-have nowadays. Sometimes that is the way you are required to get the car to and from the racetrack, but other times it is just so that you can get around easier in the pits and such. After all, a lot of the race tracks we go to nowadays are huge, and walking around might be fine if you are just spectating, but not if you actually have racing to do. So when we saw this cool little project going together for Sick Week we had to share it. And don’t for a second think this is some ultra trick build, this is a fun style project going together in the garage and while there is a bender involved that’s really the only fancy tool and you could build yourself the same basic thing without one, with a cheap roll bender from Harbor Freight, or by having a friend with a bender make you up some bends.

I have a fun mini bike that I like to bring to races, and it’s cool but because it is two-wheeled it is hard to shoot photos and such while cruising around on it. With a trike, that becomes much easier, so I think this might have to be a project to put on the list of things to do when we get the new shop up and running. It could be a fun weekend project to share with everyone.

Until then, watch this build from Boosted Lifestyle and let us know what you think. This is video number one and we’ll bring you more as it progresses!

Retrobright LED Headlight Upgrade For Squarebody GM Trucks. Here's How Simple They Are To Install. Bello's Kustoms COE Project: Custom Fitting The Bed So The Big Wheel And Tire Combo Tucks When It's On The Ground