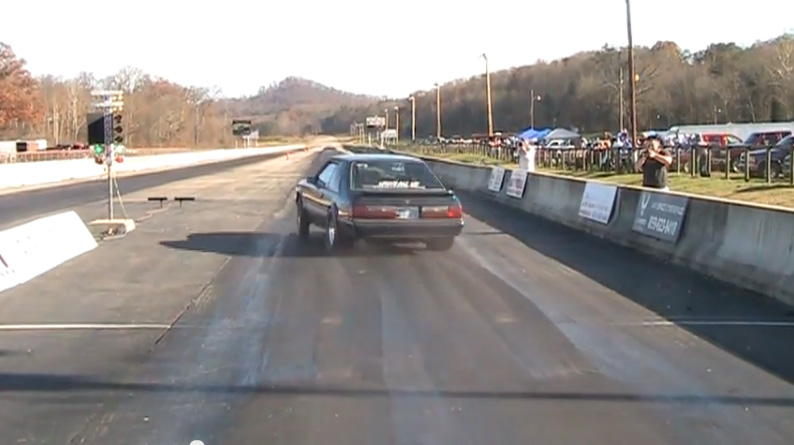 There’s a weird duality of celebrating a guy who drives his car way past the point that most others would have thrown in the towel at the drags. On the positive side, there’s a celebration of some guts, talent, and skills in taking a run that should have been thrown into the dumpster and resurrecting it into a respectable number but on the other side, maybe it is promoting the wrong thing in the fact that lots of drivers would probably have wadded up cars instead of a sweet ET like this guy. As an announcer I have loved celebrating crazy wall to wall runs so long as nothing is wrecked and no one is hurt in the end but I do struggle with potentially promoting the hero worship of runs like that because for most others they would end in wreckage.

All of that weird emotional conflict aside, it is hella entertaining to see someone horse-wrangle a car down a drag strip and that is exactly what you will see in this video. Sure, the guy doesn’t get the win light but he does finish under power and that’s a point of pride for anyone who is a race car driver in the drag racing ranks. This run is fun to watch because the car seems to have a mind of its own right off the hit of the throttle. As soon as it leaves the line it is heading left and the driver takes the appropriate action to get it heading right without ever lifting his right foot off the gas.

Thanks for the tip Clay!