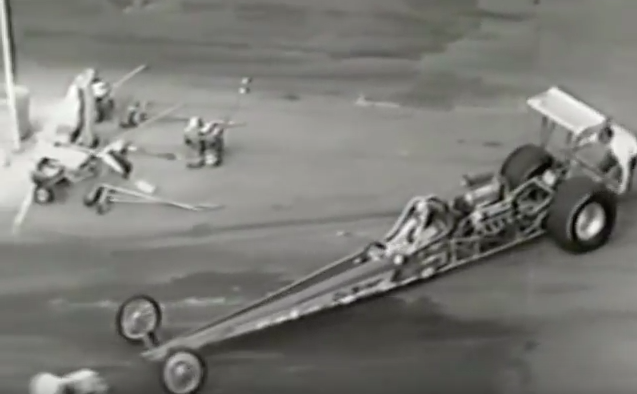 Here’s some really awesome video featuring action from the 1973 season at US 30 Dragstrip located in Gary, Indiana. The video is actually part of a bolt media program that the track had during this era. US 30 would record, edit, and distribute the video to local television. That’s some incredibly advanced thinking for an era where most tracks were just trying to keep the doors open, let alone actually having a manned and staffed media department capable of creating broadcast level television! The audio is from the tower announcers and the multiple camera angles are awesome. This is legit stuff and the production quality is pretty amazing for it being a self made thing.

Outside of the actual video the people and stuff you will see are pretty awesome as well. Jim Bucher is shown in his Chevy powered top fuel car which for a brief time did hold the national top fuel record and it was the record holder in the time when the video was made. Dick LaHaie is featured as one of the top fuel drivers along with the legendary Marvin Schwartz. This really is amazing stuff and we have not even mentioned the pro stock show. If you can conceive of it, US 30 actually ran their own weekly pro stock program and according to our historical expert below, it was as crazy as anything that was going on in the sport at that time.

This is totally awesome stuff. Now, for more, here’s our resident knower of stuff’s take:

As I always like to do when I am wondering if there is “more” to the story, I contacted Bret Kepner. He answered my question with this:

This is one of the few surviving recordings of U.S. 30’s weekly videotaped shows in the 1970s. Using a variety of (extremely expensive) video cameras all edited onsite and fed into a (very expensive) videotape machine, the product was an extension of what, originally, was simply a closed-circuit recording never meant for broadcast. These shows, however, were aimed at local syndication but only rarely were picked up. The commentary was simply pulled from the P.A. system. This particular 1973 event was quite typical of U.S. 30’s monthly professional offerings. It was a UDRA Top Fuel show featuring a handful of touring cars mixed in, U.S. 30’s own outrageous weekly Pro Stock program and a few of the best wheelstanders in the country.

Thanks to Lawrence Smith for the tip!

Press play below to watch these vintage US30 Drag Strip videos –