Drag Video: Watch This 1961 Dodge Powered By A Slant Six Take On A Mighty Hellcat At Mo-Kan Dragway 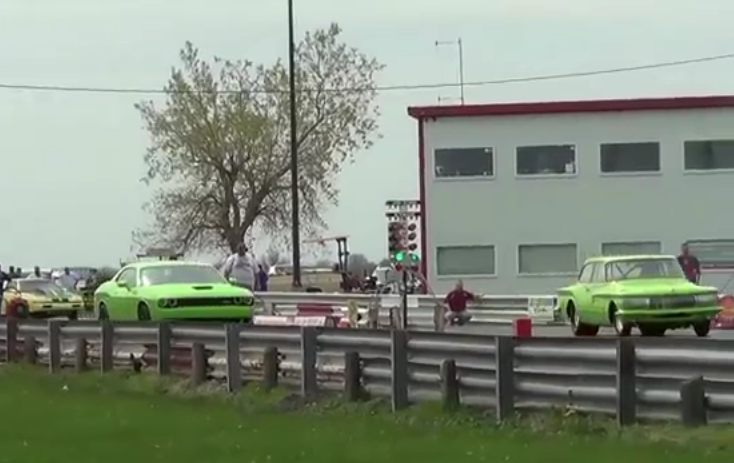 We have to thank Matt Cramer over at DIY Auto Tune for sending us the link to this video of an interesting and fast pair of Chryslers at Mo-Kan Dragway in Kansas. On the left side of the screen you will see a brand new Dodge Challenger Hellcat line up next to a 1961 Dodge Lancer with a heavily built slant six engine. The scream that the inliner makes is freaking incredible and when you factor in the fact that both cars are painted the same color, it is an even more fun clash on the strip. The run was made as part of the Mopars Invade Mo-Kan event which was contested in April.

We’re not going to give away the winner here so you’ll need to see the video for that but we will say that the sound of the mighty sixer is unreal and the fact that the car sounds like it has a manual transmission in it makes it even neater. Having recently spent a week with a Hellcat that wore this same exact color, we can attest to the fact that the cars are blindingly fast, especially for something that you can literally drive off the showroom floor and hammer the daylights out of.

The slant six engine is one of the greatest power plants ever created by an automaker. It was in production from 1959 to 2000 (replacement engines) and while it was not a muscle car plant it was a dutiful engine that powered tens of millions of cars, pickups, boats, and any number of other machines that needed motive power. While we do not have the specifics on this engine, we can tell you that it is built to the hilt to even have a shot at hanging with the Hellcat. Hopefully we can get some specs from the owner of the Lancer because we think it is one heck of a BangShifty rig.

Think the 1961 Dodge Lancer with the slant six can hang with the Hellcat?

4 thoughts on “Drag Video: Watch This 1961 Dodge Powered By A Slant Six Take On A Mighty Hellcat At Mo-Kan Dragway”