Ever Wondered What It Would Be Like To Have A Blown Hemi Explode In Your Face? This Video Shows It All Too Well 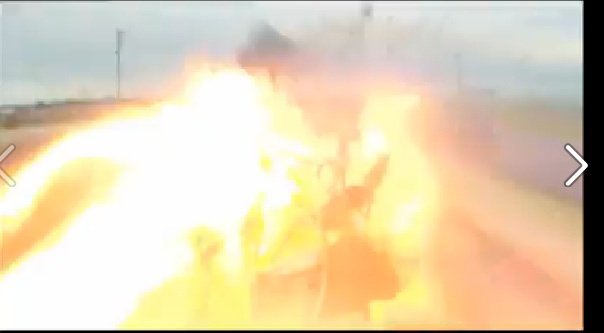 Doyle Smith is from Paris, Texas and he’s the guy that gets bathed in fire and hot oil when the nitro burning hemi engine in the front of his nitro burning AA/FA expires at San Antonio Raceway. Few videos do the scenario you are about to see the justice that this one does. Why? Well things go wrong so quickly and so violently that before you can blink, there’s fire and parts, and sadness all over the place. The car is no slouch. Running an 85% load of fuel through the Brad Anderson Hemi and compressing it all with a blower means that there’s thousands of horsepower in Smith’s lap when he’s on the gas. In this case all of that power resulted in the following, according to a post Smith made on Facebook:

Pushed the pinion out the front and let the motor go 12000. Hung some intake valves open.

After you see this video, you’ll understand that’s like the guy who dropped the atomic bomb saying, “Opened bomb doors, bomb fell out, things went boom, flew away. That being said, if Smith were to be freaking out about it, he wouldn’t be a fuel altered driver. These things are all part of the job when the firewall between your face and the engine’s fury is a visor. These dudes are not right and we mean that as a compliment!

The video is three minutes long but we’d recommend skipping right to the 1:00 mark because that’s when the action starts with the burnout and all that good stuff. The engine sounds as wicked as you’d expect with that load going through it. The car goes into staging at about the 2:00 mark if you are really looking to save time.

As you will hear when Doyle stages the car, he’s clearly racing someone running alky because the revs come way up over in the other lane. Smith’s car sits and idle until he lands on the pedal. As the car rockets past 60′ things are looking OK but before the 330′ cone, the engine hesitates a little and then a split second later KABOOM. The camera gets bathed in fire and when that subsides, there’s oil all over everything. You’ll see Doyle smith climb from the car and survey the destruction. When one of these engines finds 12,000 RPM, perhaps the only savable parts are the valve covers. Wow.