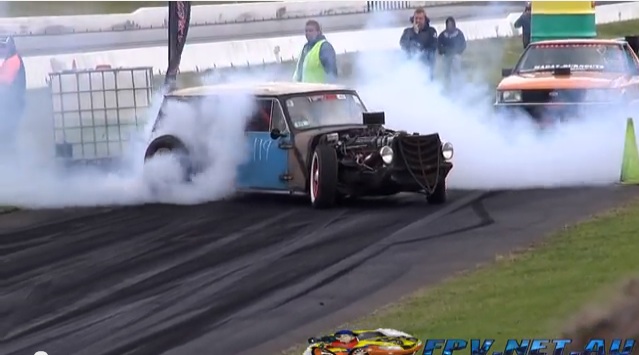 Yes, it’s another Aussie burnout video, but this isn’t the usual Holden or Ford blasting the tires to kingdom come…it’s one of the most hacked-up Mini panel vans we’ve ever seen! It’s owned by Craig Davies and it’s hard to tell if it’s been chopped or channeled simply because A) it’s a Mini and B) we don’t know how the snotty V8 was jammed in there in the first place…we assume a lot of jumping up and down on the engine was involved. Either way it’s one bad little beast, because it doesn’t even make it off of the run-up road before the car tries to torque itself off into the grass. We don’t know what is powering the car but it’s stout, sounding like it’s barely working to keep the rears spinning. It’s a great combination and we’re sure it’s loads of fun. Here’s hoping he doesn’t get caught in the wet, however…if you thought an overpowered Fox Mustang or El Camino was fun in the rain, imagine his worry!

It's Not A Chevelle With A Blown Radiator, It's The SE-124 - A Steam-Powered Chevrolet! Unknown Parts Counter Guy: Leading From The Front And Covering Your Rear