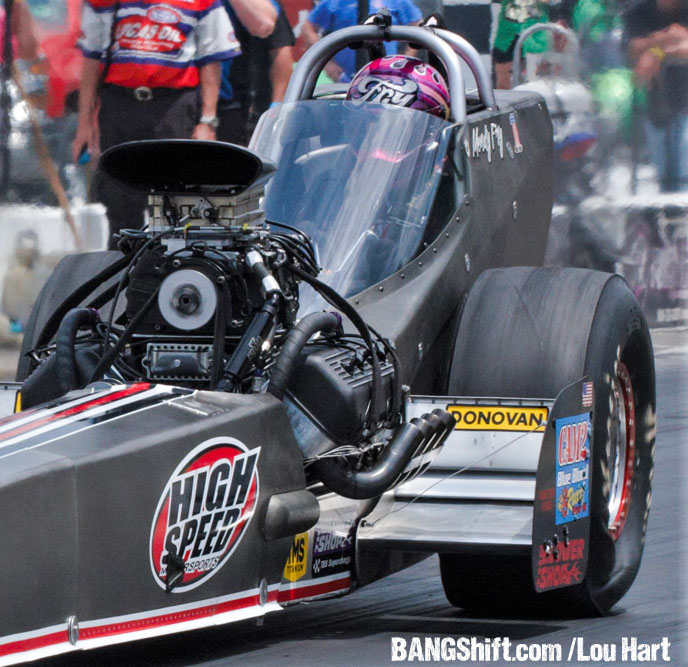 Jeff Arend took home the coveted Wally in the Nitro Funny Car category with his run of 5.784-seconds at 243.28 mph. Arend, driving Don Nelson’s “California Hustler” Trans Am, was also #1 qualifier for the weekend and a Top Speed of 248.80 MPH. He defeated a red-lighting Dan Horan Jr. in the Final and Eric Stevens on his way to the victory. Both Arend and Horan towed all the way from Southern California for this Reunion. 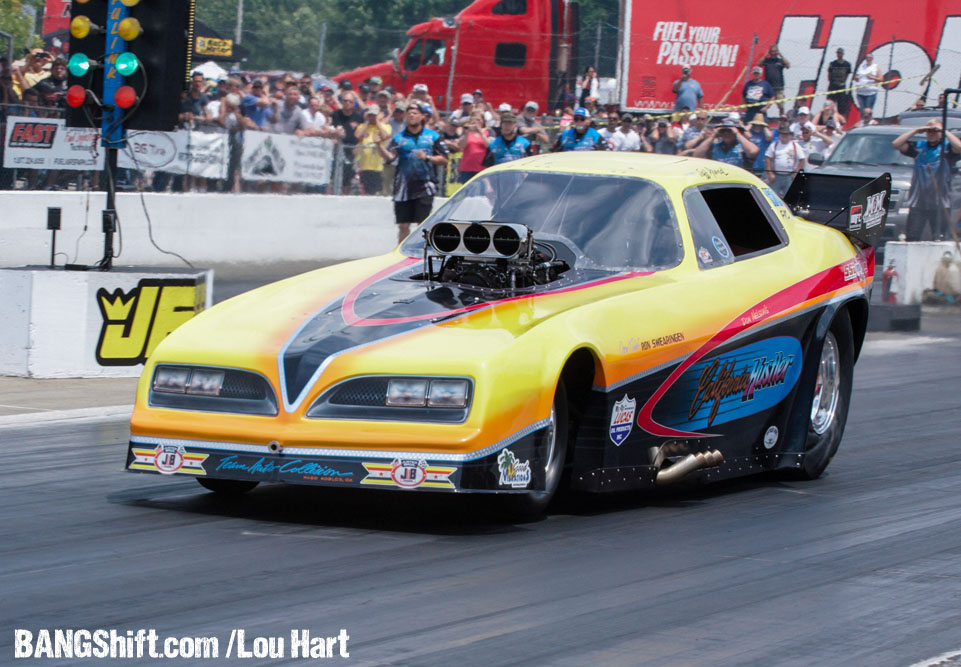 “We’ve never been to Bowling Green before. Love the track; it’s a great area,” said Arend. “The car ran good and Ronnie Swearingen is a good Crew Chief. We have a great team here. We were low E.T. in qualifying. So today we knew if we ran the same as we have, we’re probably going to do okay and win. I’m really happy we won and got a Wally for owner Don Nelson.”

Mendy Fry won Top Fuel in the “High Speed Motorsports” AA/Fuel Dragster. Fry took the final battle with 5.561 ET at 259.21 MPH in a close race with Jim Young (below) who drove his “Young Guns” fueler to runner-up laurels with a 5.651 ET at 262.28 MPH. Both drivers pushed their machines up to the limit and beyond after running within a few hundredths of a second and miles per hour of each other throughout the event. 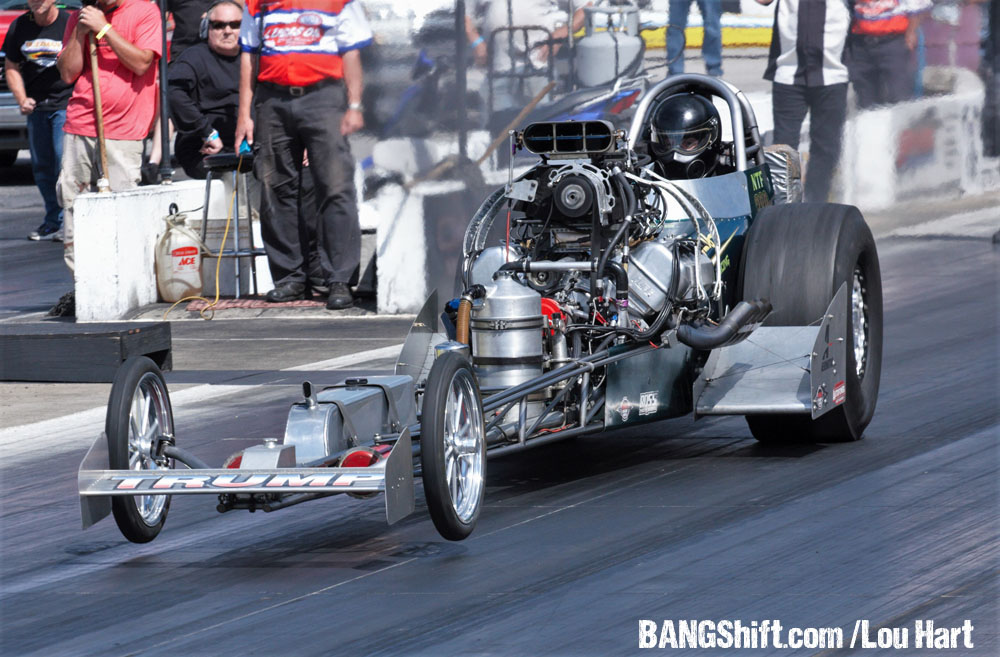 In the final round, Fry said she kept her foot in the “High Speed Motorsports” dragster even as her Hemi engine was coming apart. “I knew it was going to let go at 1000-foot”, said Fry. “I was not lifting. I think it pushed the head gasket out — I was oiled in. I knew I was straight, so I stopped on the track as soon as I could. I could hear him… it’s a crazy feeling, knowing something was going wrong and not lifting.” 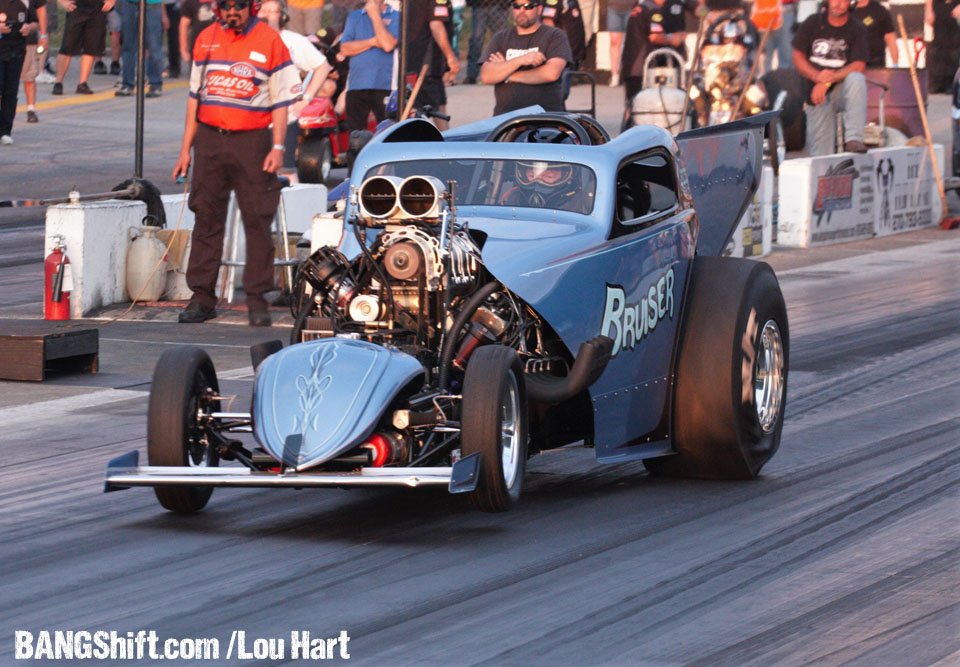 In other categories competing, Rich Krohn from Englewood, Florida won in 6.0 Eliminator in his new McKinney dragster, Jeffrey Sanborn from Shelbyville TN in his ’38 Fiat Topolino won in 7.0 Pro Eliminator and Kentuckian Randall Boles was the winner in 7.5 Eliminator.  Indiana’s Dan Dishon captured the win in Competition Eliminator and Jim Hayes emerged victorious in Gas Eliminator with a whopping 64 entries! 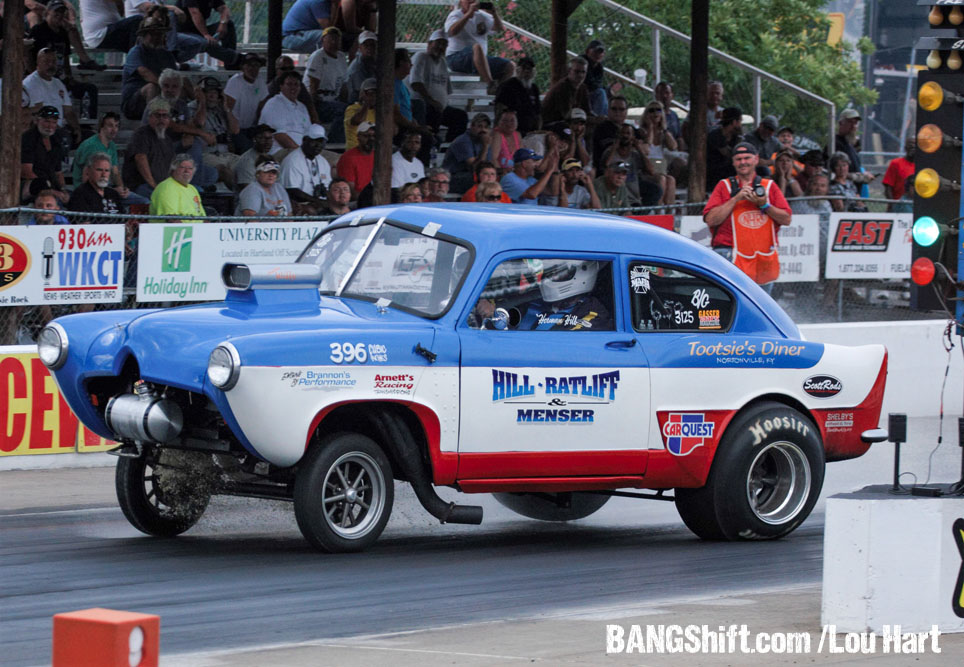 In Modified Eliminator, Greg Carta’s Camaro came away with the win and Jimmy Ray took the top spot in Nostalgia Super Stock in his ’65 Malibu from Tennessee.  George Warren in Top Stock Eliminator and in Hot Rod Eliminator captured the win, Paul Mitchell snagged the victory. Rounding out the day’s winners were Herman Hill (above) in Straight Axle and Joe Bush in his ’40 Willys pickup took the Geezer Gassers Wally.

As is Hot Rod Reunion tradition, the ever-popular Cacklefest™ fired to life to close out the event. The sounds of American muscle reverberated under the covered grandstands as vintage cackle cars roared to life delighting hoards of fans. 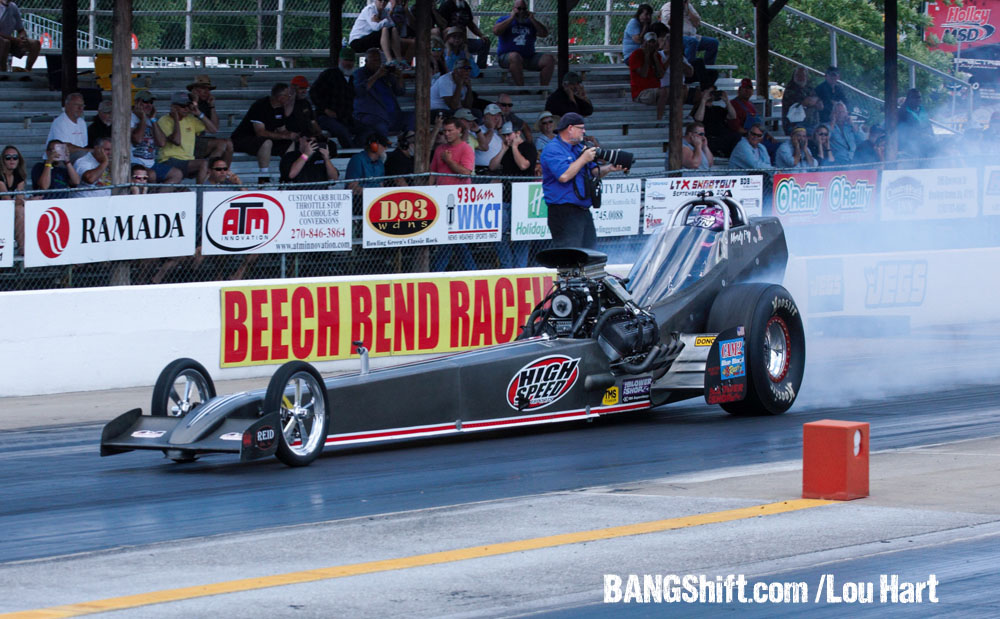 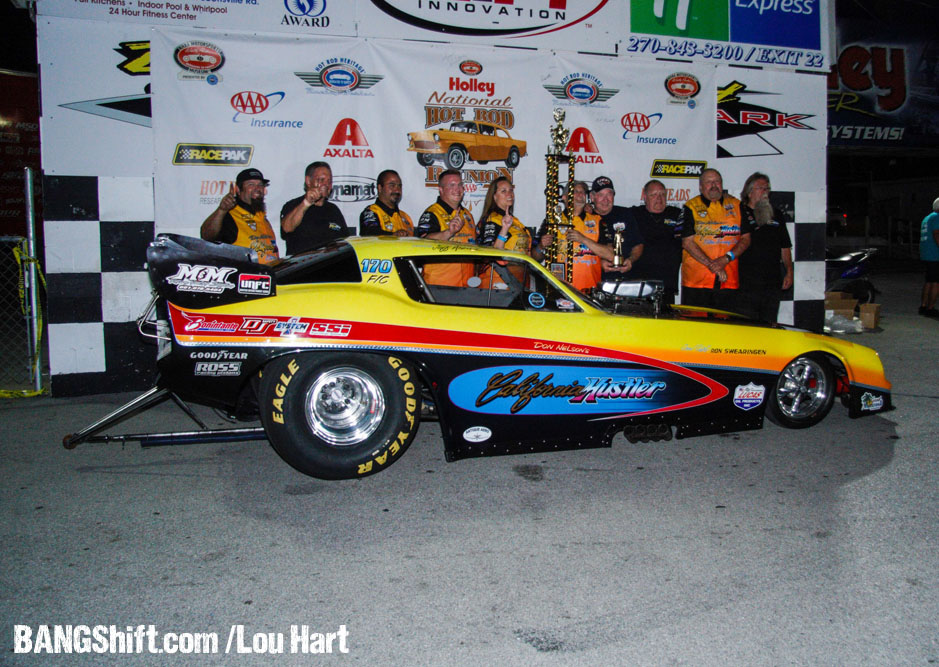 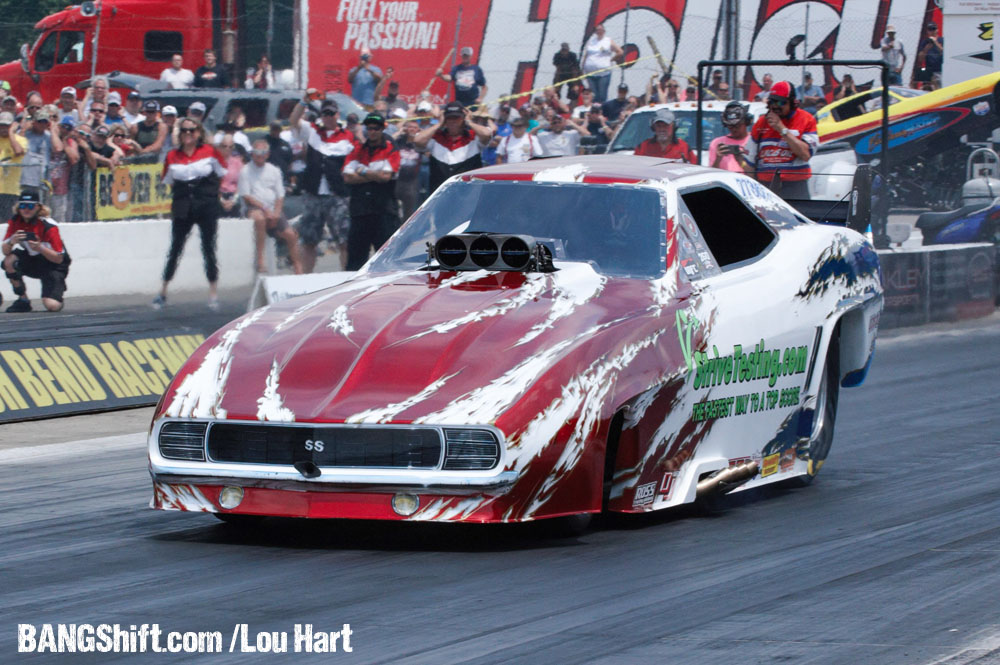 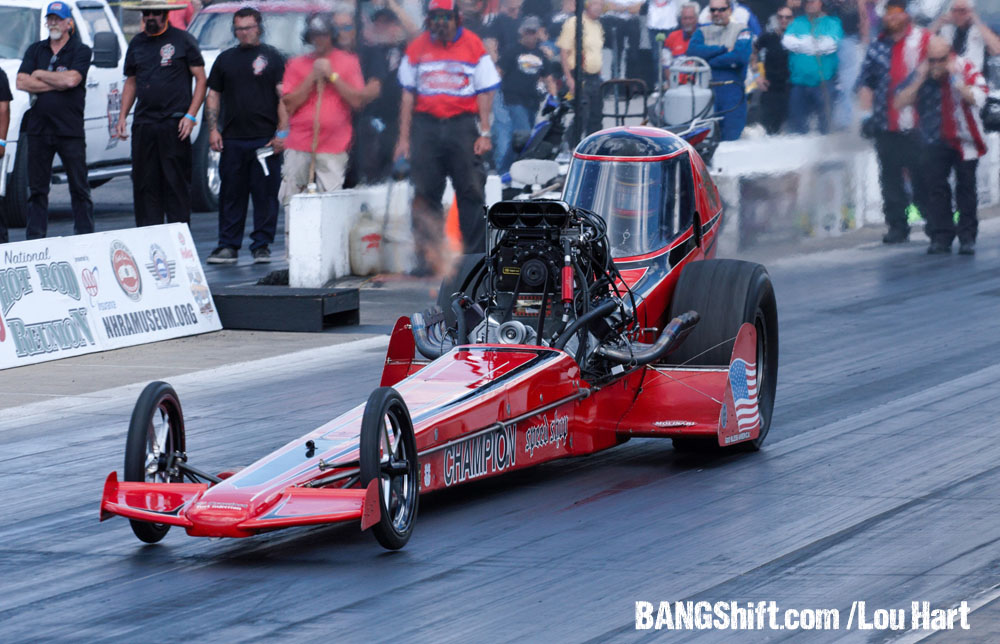 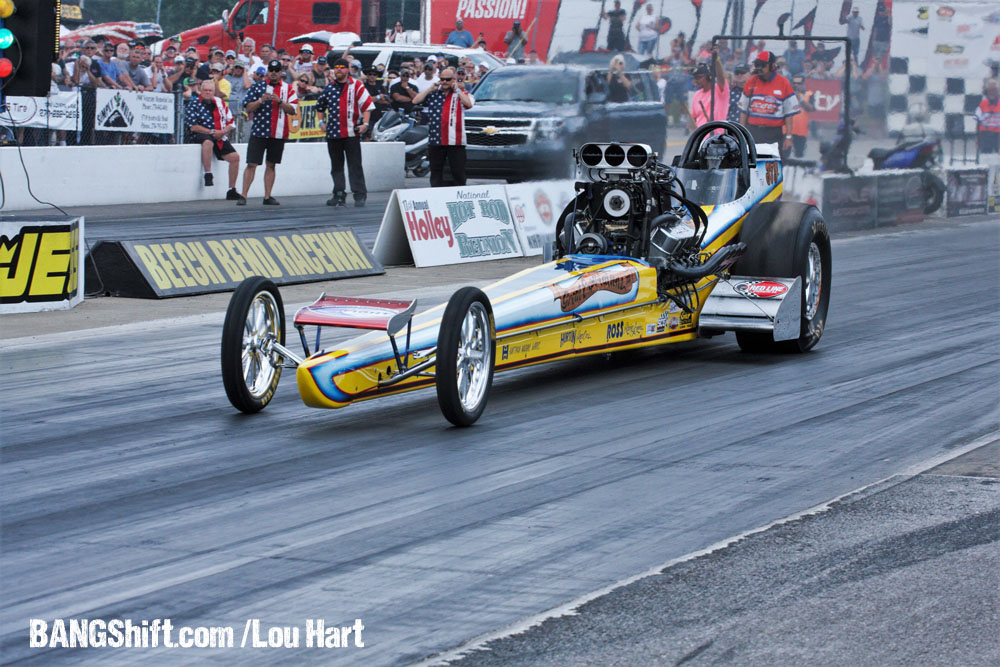 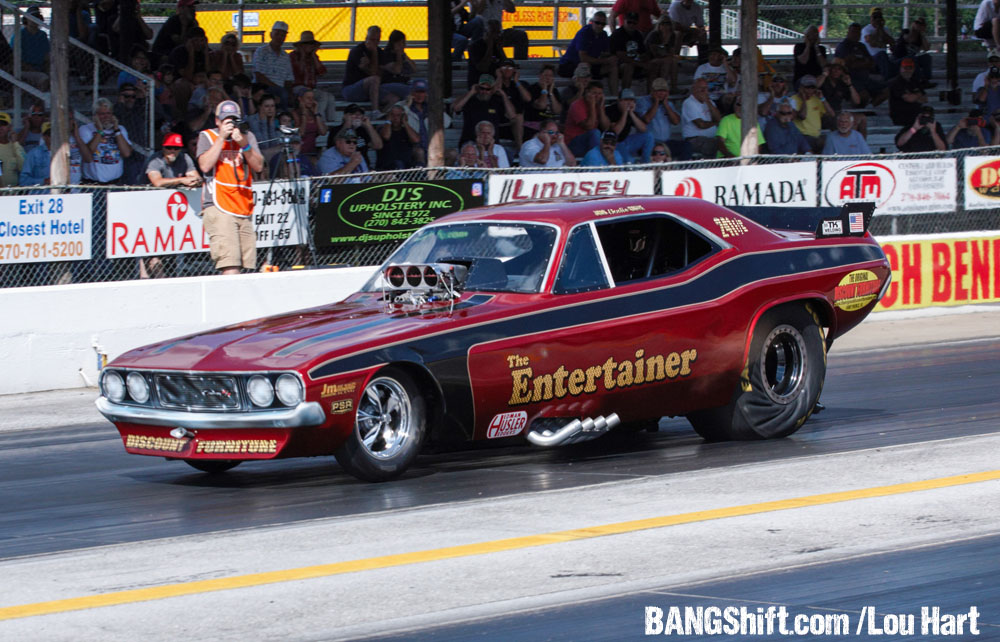 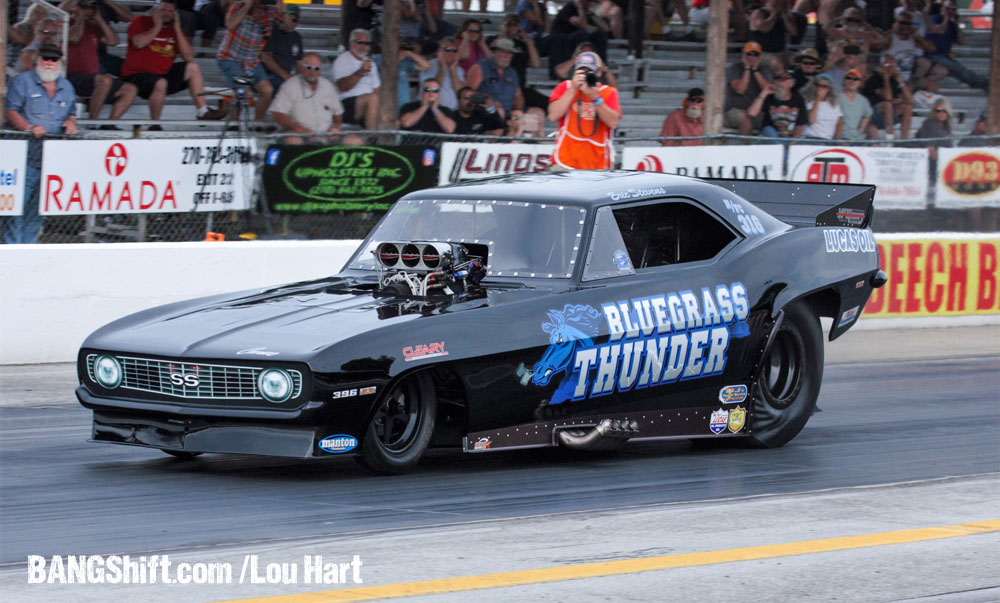 Check out this Gallery from the 2019 Holley National Hot Rod Reunion!