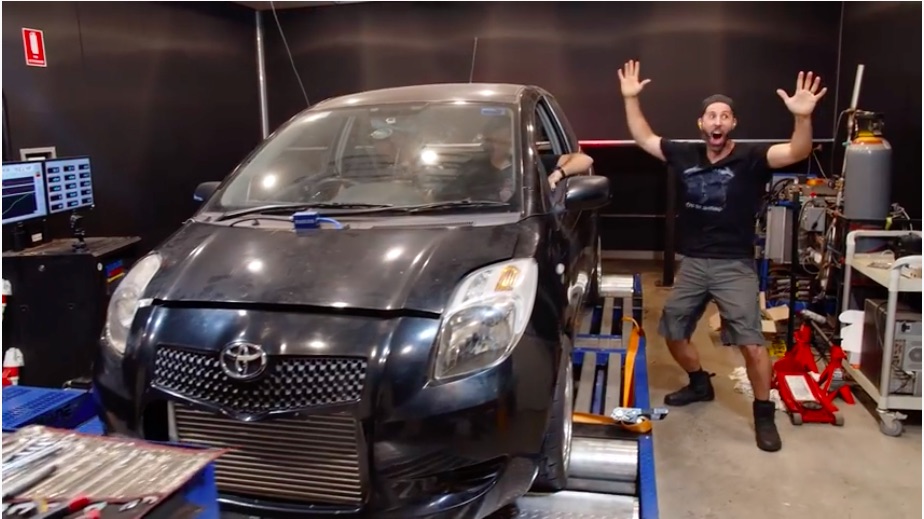 The Mighty Car Mods guys in Australia are great. With more than three million YouTube subscribers on their channel, we’re not the only ones who dig their brand of automotive craziness. Their latest endeavor is a Toyota Yaris project that they’re calling “Yaris Hilton”. This thing has been modified with a “big block” Toyota engine, it has been boosted with a $169 Chinese internet bought turbocharger, and the guys have really had to work to make this thing whole. Just trying to get stuff to fit under the less than sizable bonnet of a Yaris is an adventure!

You can go back and see the earlier episodes of the build to catch that stuff. This one is all about action on the dyno and making horsepower with their weirdo little combo. Like most trips to the dyno things get interesting quick a the car’s fuel system is not even close to adequate to feed what the engine wants and needs now with boost. Getting creative and having some foresight the guys came with a junkyard find Yaris in-tank pump setup and were able to modify it with a 300lph piece to keep the fuel flow where the engine was happy.

Using HalTech engine management on the car, the dyno dude tunes like a whiz and every pull keeps netting more and more horsepower. We have no idea how long the engine will last at the wheel horsepower level they end up with but we know that once this car hits the streets, it will be hilarious. A Yaris is not heavy. A gutted Yaris with 200hp at the tire is going to be a freaking rocket ship!

Press play below to see the Mighty Car Mods guys make 200hp at the tire with their Yaris!

Weird Vans: This Dual Road Test Of The 1987 Nissan Van GXE and The Mitsubishi Wagon LS Is Funny Watch The 1990 IHRA Winternationals Here - Big Names, Big Engines, And The 20th Anniversary Of The Organization