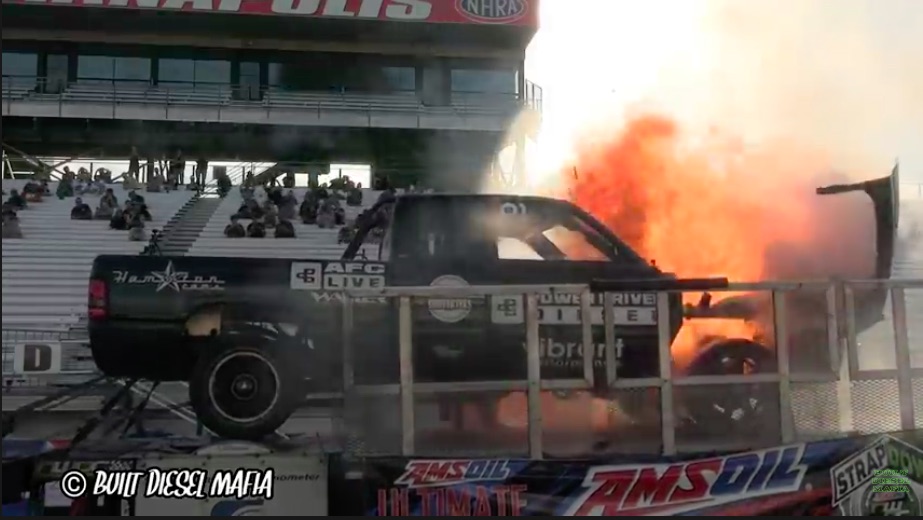 This video is wild. It is shocking. It is also pretty scary. You are going to see the Power Driven Diesel Ram explode at Ultimate Call Out Challenge 2021. This event is the pinnacle diesel performance event in the country with the most well known shops bringing insane, no-holds-barred rigs to sled pull, drag racing, and yes, throw down on the dyno rollers. It is here that we pick up the story of the Power Driven Diesel Ram and it’s spectacularly failed attempt to make 3,000hp on the chassis dyno.

The truck is strapped down on the return road of Lucas Oil Raceway and there are fans on both sides of the drag strip watching the action. Those on the far side were the luckiest ones as they were not dodging parts. Like literally dodging parts. You are going to see the truck get up on the rollers, get the engine up to operating temperature and then you are going to see the driver make a couple of attempts to get the turbochargers to light off. That is one of the most challenging aspects of dyno testing these trucks. Getting the right load on the engine at the right time to really bring the turbos in.

After a couple of starts and decelerations, they hit the sweet spot and the engine is put to the ultimate test. It fails like few things we have ever seen before, sending parts in all directions. You will see and hear the connecting rods and crankshaft flailing wildly into the air. The block was blown apart right at the main bearings basically and there’s no pistons left, no cylinders left, nothing. Just those little battering ram connecting rods whipping about. The scary part is that a load of engine parts shot themselves into and over the stands. The second video shows a guy picking up a piston that landed next to him! Had any of that stuff landed on someone, it would not have been good.

It sure seems like these insane horsepower trucks are going to need to go the way the tractor pullers have with straps and other devices to prevent this from happening. The UCC is an epic event that grows every year. We do not want to see anything bad happen for the event, the track, or the competitors.

The forces involved here are just nearly beyond comprehension.

7 thoughts on “Pistons In The Stands Literally: Watch The Power Driven Diesel Ram Explode At Ultimate Call Out Challenge 2021”