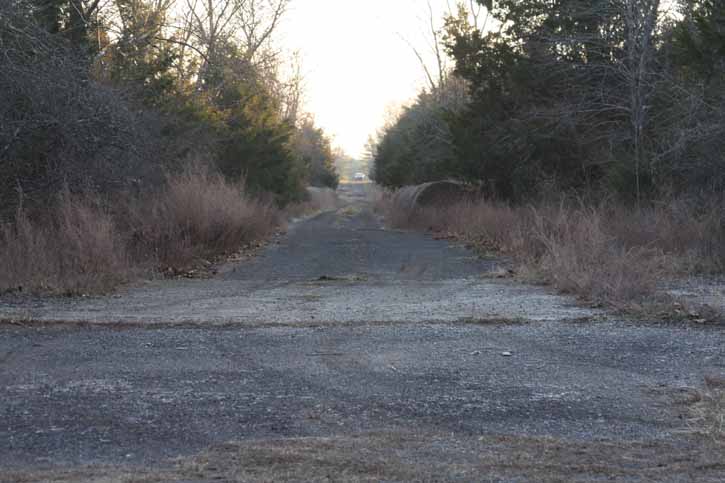 (Editor’s note: As we’ll be NHRA racing in Virginia this weekend I’m continuing to look back on some of the state’s great drag racing heritage. This story has run a time or two but for those that have missed it, we visit the awesome remains of an early Virignia drag plant…Louisa County Raceway. – BL)

One of the most fun trips I have ever been on in my life happened a couple winters back just before Christmas. We loaded up the family and struck off to North Carolina on back roads, stopping to visit 18 drag strips (some living and some dead). We stayed away from the well known places and concentrated on the little hole in the wall tracks that people don’t know about unless they live in the area and that form the actual backbone of drag racing. These are the places that have been running for decades and will be running for decades despite the near constant drumbeat of “the sport is dying” that is so popular to report these days. While those little tracks were fun to see, the real entertainment came in the form of the dead tracks that we were able to visit. Thanks to help from our friends at the TTGA we were able to stand on the ground that Ronnie Sox first raced on, places where funny cars once ran but have now been made into residential streets, and the capper of them all was a visit to the place you see in the photo above, the ghostly remains of Louisa County Drag Strip in Virginia. 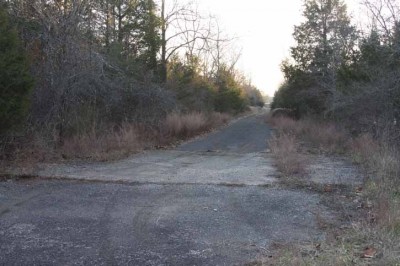 Opened in 1959 as one of the earliest drag strips in Virginia by Frank LeSueur, Louisa County Drag Strip did not have the longest of lives, closing in the middle 1960s as competing tracks like Suffolk, VA (which LeSueur also opened) made the little, narrow 1/5th mile strip more and more obsolete. Today the land is part of a farm but the gate was open and the land appears to be for sale so we went in and kept our fingers crossed that we weren’t going to catch a load of rock salt in our backsides.

The decades have played out as one would expect them to. The surface of the track, while visible is slowly being reclaimed by the Earth, the once wide open view from the pits to the track has been replaced with a formidable wall of trees (that were likely little saplings 50 years ago) and the concrete launch pad is present but crumbling. Being that this track was right in the hotbed of the nation’s exploding love of passenger car drag racing, all of the big names of the early and middle 1960s came through the place at one time or another. Platt, Sox, Wallace, and a host of others were headlining acts at the track along with all of the local heroes who gave ’em hell when they came through the gates.

This place was pretty freaking hard to find, mainly because of the fact that it is set slightly back off the road and although we were using some specific coordinates, it took actually firing up Google Earth and counting the rows of trees that were lining out the fields of a farm before we stopped, looked, and noticed the narrow column of open space you will see below.

The pits are about as pastoral looking as we have ever seen in our lives. When in operation the track must have been a nice place to spend a Sunday having fun. We have included videos below the photos that show the track when it was in operation during the early 1960s and it is really fun to check out the photos and then contrast them against the video.

Louisa County Drag Strip was, in the end, a victim of the sport’s rapid evolution. While it was once good enough to simply have a clear place to race, as the cars and technology advanced, so did the facilities. Hemmed in and really not looking like a great long term option, Frank LeSueur did what he needed to do and opened a new and better equipped strip in Suffolk. What was once a center of driving noise and commotion now stands as an aisle of hay bales in the sprawling Virginia countryside. Louisa County Drag Strip has been enjoying the quiet, retired life for a half century now. Who knows what’ll happen to it when the land is sold.

CHECK OUT PHOTOS FROM LOUISA COUNTY DRAG STRIP AND THEN VIDEO! 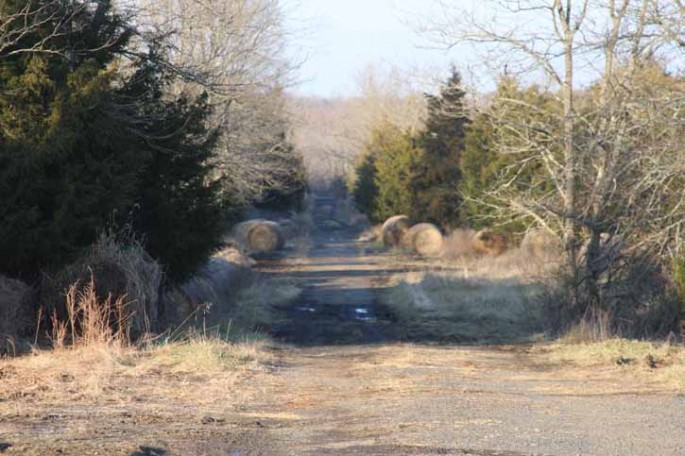 Here’s the view from the shutdown area back towards the starting line. Since we were there in winter there was nothing growing. At this time of the year we bet it seems far more narrow….and green. 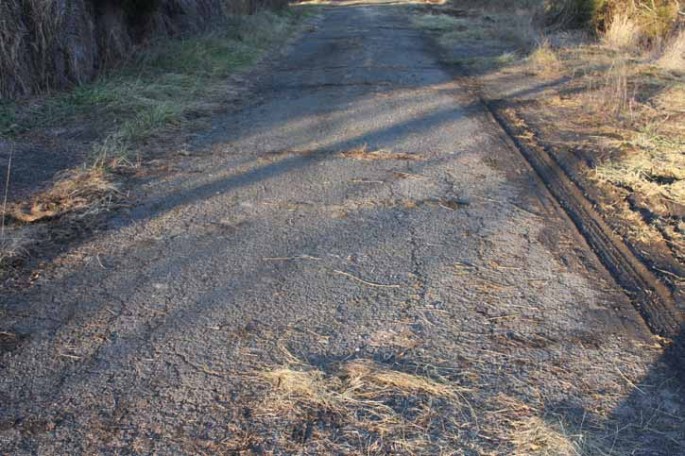 The grass and other vegetation have encroached over time, making the narrow strip about wide enough for one car or pickup truck. 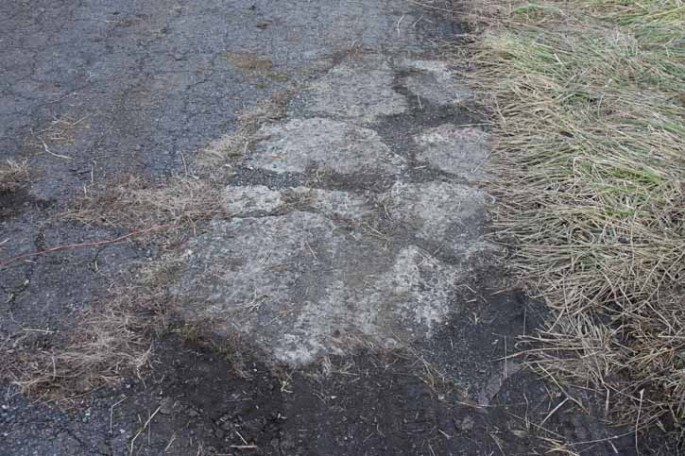 There were some interesting concrete patches at various points. We weren’t sure if these patches were made when the track was open or when it became part of a farm. 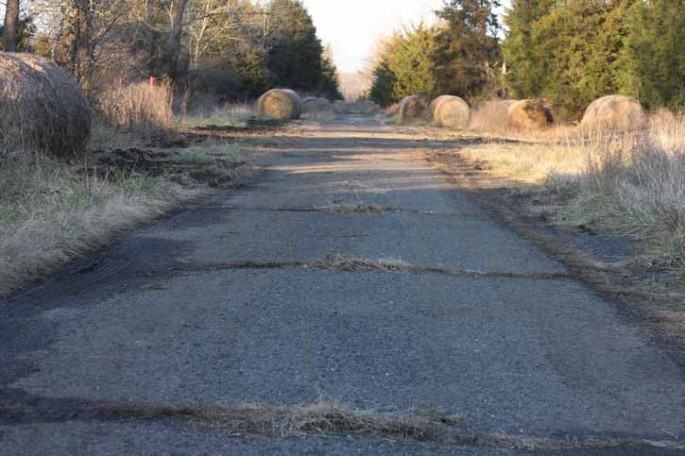 The asphalt has some pretty good cracks in it now and they got more pronounced the closer we got to the starting line. 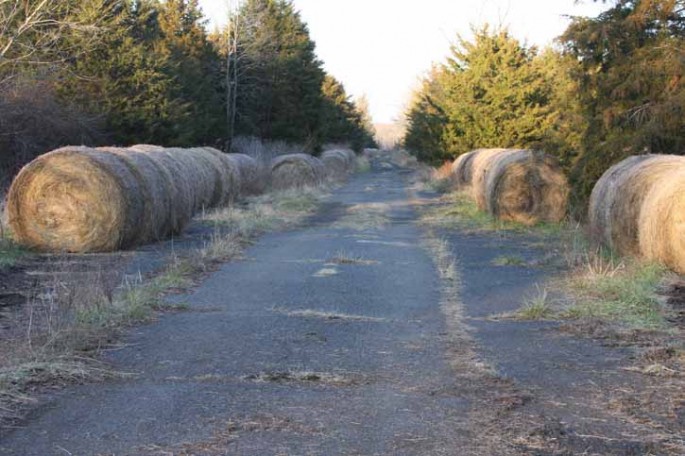 Admittedly the old strip makes for a handy aisle to drive a tractor down and store hay bales along. Yes, it would be cooler if cars were racing here but you have to admit that this is an interesting scene. 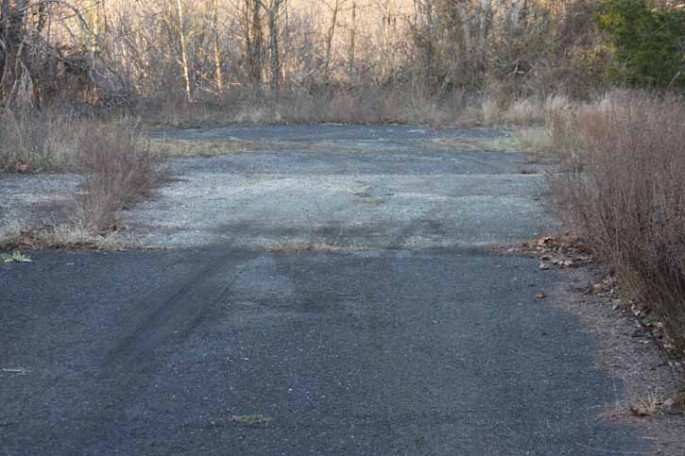 There’s the concrete launch pad that cars attacked each and every week here for years. It is rapidly returning to its base elements. 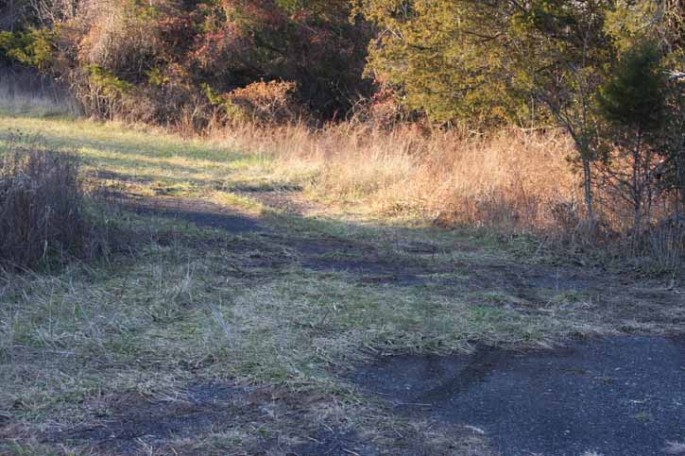 Here’s where the staging lanes made the turn from the pits onto the track. 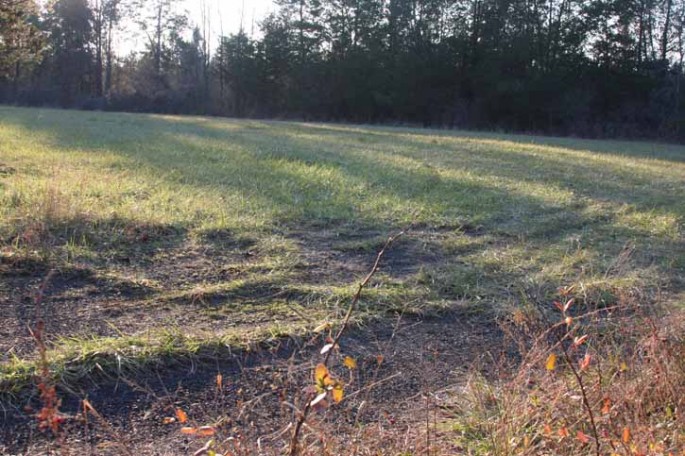 These are the “upper pits” likely where cars were lined up before running. It is a nice looking field. 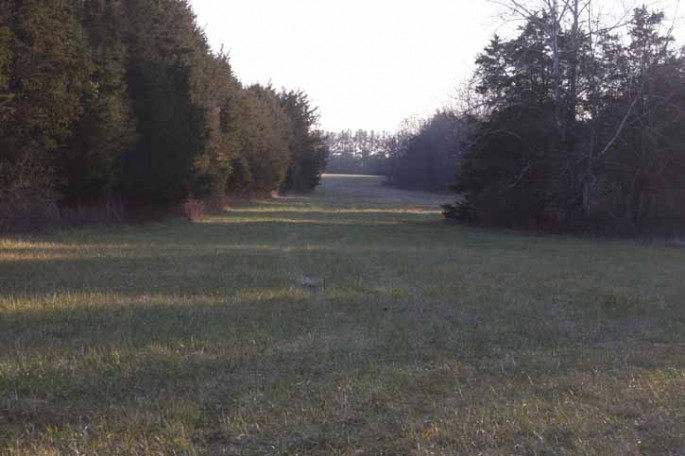 Here’s the rest of the pit area, which you will see in the videos below, was missing lots of the big trees and stuff a half a century ago. This was as serene and nice a scene as we have ever stumbled upon. Pastoral, indeed. 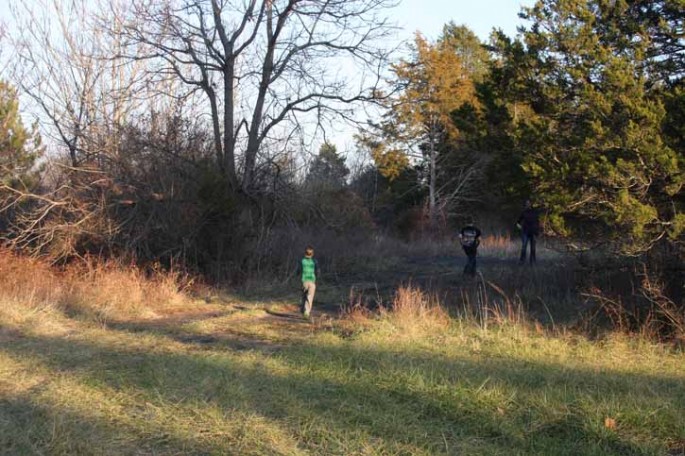 My sons Tom and Jack heading around the corner to make a run. 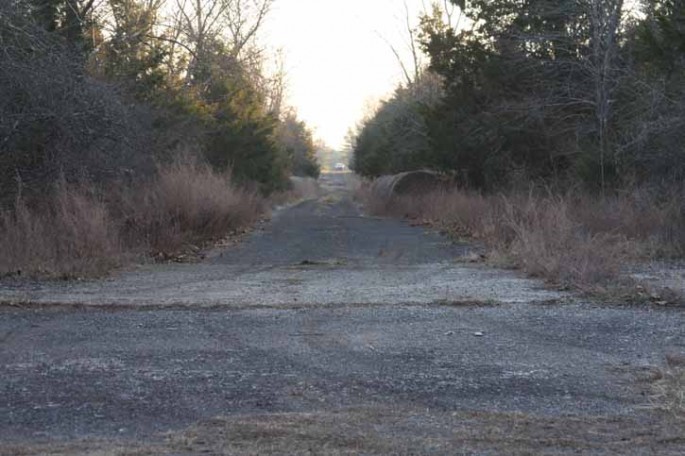 Here’s the view that racers would have had back in the 1960s. Maybe it was Hubert Platt and Pee Wee Wallace getting ready to drop the hammer or a couple of local drivers giving it their best shot. 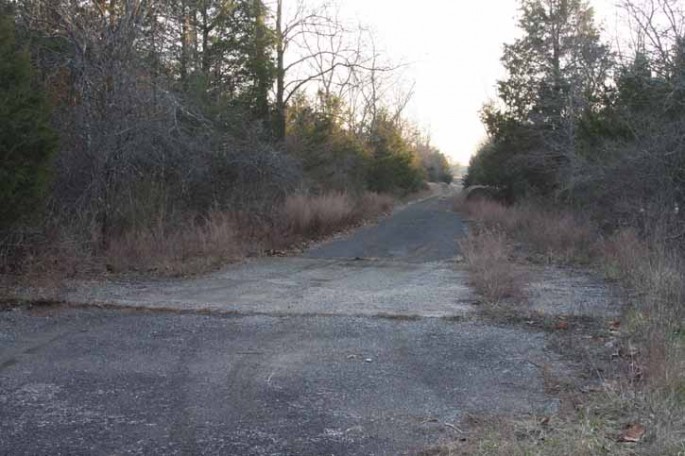 We took one last look before walking down to the car. 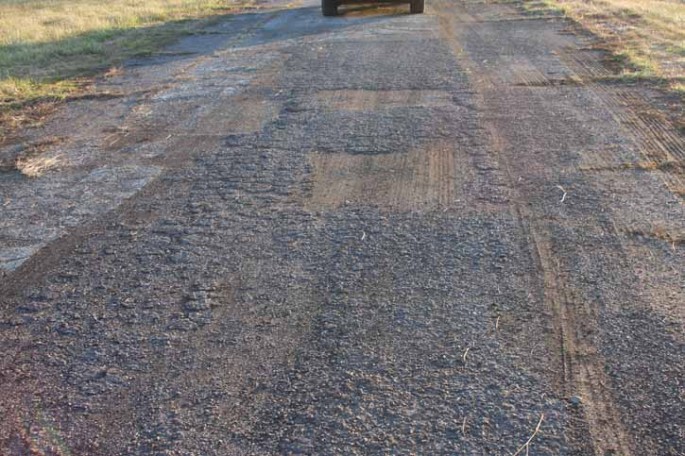 It was unclear to me if this was still shutdown area of if this was part of the access road to the track. Either way, it was not paved to the same standard as the strip itself even though it was inline. 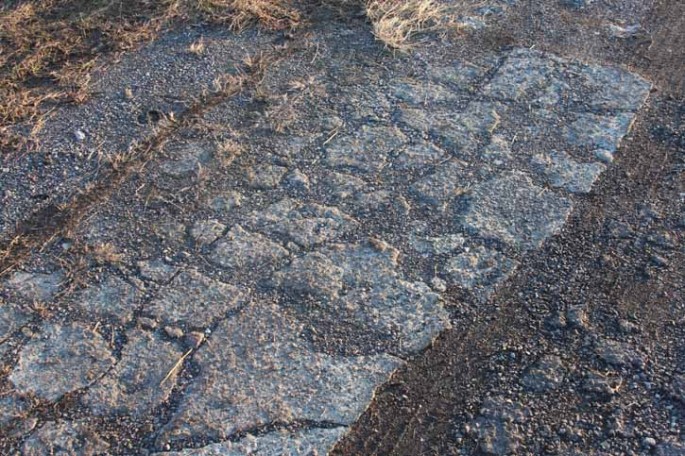 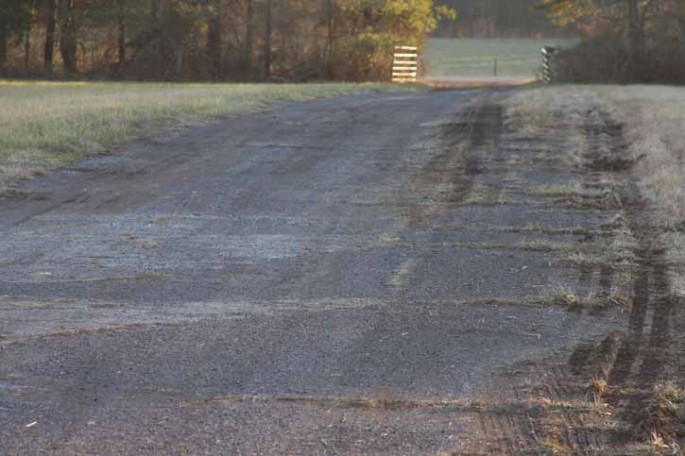 There’s the open gate that we slipped though to look at this piece of forgotten drag racing history. It was a beautiful afternoon and a very fun place to explore.

Classic YouTube: A Day At Buck Motorsports Park Through The Eyes Of Australians Better Hurry: There Is A Rarely Seen In The States Mk2 Ford Escort For Sale - A Little Hot Rod With A Cutting Brake