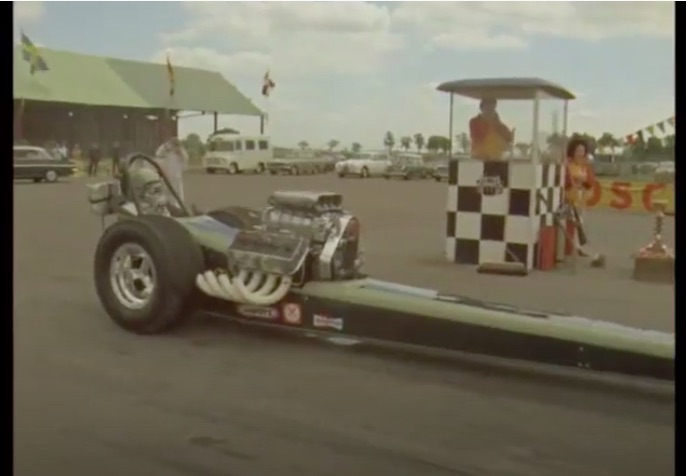 When drag racing became a thing in the first half of the 1960s in England, it took off pretty quickly. Always modest by the standards of American drag racing, English enthusiasts didn’t just import all their stuff from the USA, they built unique machines based on the parts and pieces that had at hand in their own country. This professionally made film from Santa Pod in 1970 rules because we meet interesting people, see cool cars, and get the general impression of what the public thought of the drag racing sport back in its early days.

The guy who the film spends the most time with is Michael Collins, a British drag racing enthusiast and automotive journalist who wrote for all the big books over there and was a contributor to American drag racing magazines and places like Hot Rod as well. He describes the sport, the people, the sensations of being in a really fast car, etc. It’s cool. He does it all in fine early 1970s counter culture style by wearing a vest with nothing but his tattoos underneath.

Check out the cars, enjoy the sounds and sights, and like us, try to figure out what the hell the starter is doing flapping his arms around between the cars. This is cool!

One thought on “Groovy Video: This Professionally Made Film From Santa Pod In 1970 Rules – Cool Cars, Interesting People”