Till The Soil: Bringing A Toyota-Powered Pontiac Tempest To A Pig Farm Drag Race 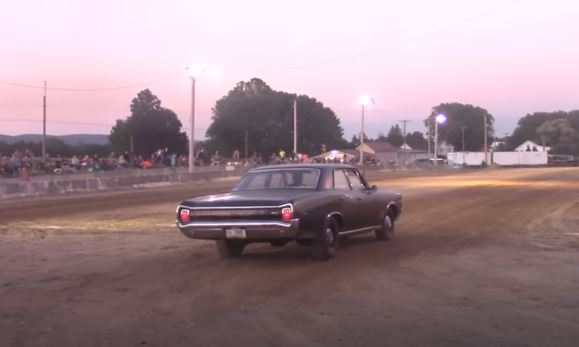 Prepared asphalt, concrete, some road deep in the industrial section of town…dirt. Quick question: which would you prefer to launch a car off of? Unless you’ve sitting pretty with the four-wheel-drive diesel or the rally rocket, chances are good that dirt is last on your list. Dirt is what you use to look like a Dukes of Hazzard stunt driver. Dirt is what you use to park cars on when a parking lot isn’t available. As a drag racing medium, the typical car and dirt don’t match up. And that’s before you get to most people’s thoughts about cars and dirt, that they don’t mix at all. You know the types…the ones who have trepidation about dropping a wheel of their precious 1995 Pontiac Bonneville SSEI with the gold basketweave wheels off of the paved surface because it would depreciate the value of their 1990s luxury touring sedan. Asking them to drive on dirt is like asking someone to use a $100 bill to clean themselves with.

Then there’s the Fuel Injection Sucks group, who don’t care an ounce about what is right and wrong when it comes to automobiles and social norms. They build what they want, they have fun with their projects as they see fit. In this case, the vehicle of choice is a Toyota 2JZ-powered Pontiac Temptest and the venue is…a pig farm. Dirt drag racing on a pig farm. At most drag racing events, I enjoy the smells…burnt rubber, traction compound, race fuel. Something tells me that here, I wouldn’t enjoy it a bit. Because, you know, pig farm.

5 thoughts on “Till The Soil: Bringing A Toyota-Powered Pontiac Tempest To A Pig Farm Drag Race”