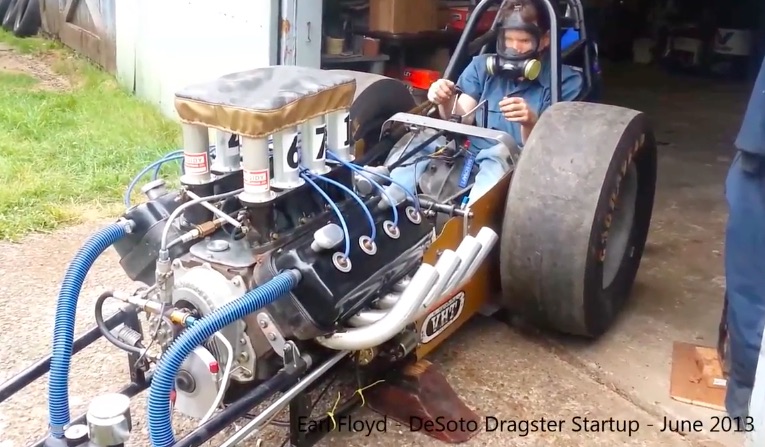 Good old 3/30, a fine day to be chatting about engines, wouldn’t you say? Other than the big block displacement days (oh, they are coming!) there are not that many days with multiple engines from multiple companies stacked up on top of each other. Today we have for you the Olds 330, the DeSoto 330 hemi, and the 5.4L modular Ford that displaces 330ci in all of their glory.

The 330ci Olds engine was cool because when introduced in 1964 it represented the first “small block” that Oldsmobile produced. The engine itself was all new and included complete redesigns of just about all facets of an engine. The cylinder heads were new along with the block which had a bore of 3.398″ and a forged steel crank that swung a stroke of 3.385″. The reason the engine was considered a small block was because of the deck height which measured out at 9.33 inches. At the top of the performance chain was the 4bbl version of the engine rated at 315hp in the 1965 442 model. The engine’s shelf life was 1964-1967 and in “normal” trim it produced like 250-260hp.

The 330ci version of the DeSoto Firedome or Fireflite hemi was introduced in 1956 and only stuck around one year before it was stretched out to 341ci the next year. The engine itself was introduced in 1952 as a 276ci V8 and grew over time. Through 1954 the 276ci displacement stuck and then in 1955 the engine became a 291ci mill and in 1956 made the leap to 330. The displacement increase came with a new crank that had a 3.8″ stroke. With a 2bbl carb the engine was rated at 185hp and with a 4bbl it was rated at 200. This thing was immensely popular with drag racers who ran fuel through them until they blew to pieces. They can still be found in nostalgia drag cars out there. Tough as nails and capable of handling lots of abuse, these little monsters helped fuel drag racing’s golden era.

Lastly but not leastly, the 5.4L Ford modular V8 was rolled out 1997 as the truck replacement for the venerable 351 Windsor engine that had been driving the F-series for decades. While mild in truck form the engine started to show its teeth as a performer in the Ford Lightning with a rating of 380hp. This was with two valve heads. Things stayed pretty calm on the factory side with three valve heads. There was not really a performance version of the three valve engine other than the slightly hotter versions in large SUVs. Naturally aspirated power was rated at 320hp during this time. When they put the four valve heads on, the party got started. 1999 was the first 5.4L engine with the four valve heads and that was a 300hp Lincoln. By 2000 the awesome Mustang Cobra R had 385hp and that engine. The 2007 GT500 arrived with a 500hp version of the engine, the Ford GT got a 540hp version of the engine and the 2011-2012 Shelby GT500 got a 550hp version of it. The 5.4 with 3 and 4 valve heads was also used in Aussie performance cars during this time. They are still wildly plentiful and you can see them working hard with all kinds of mods at any drag strip across America each weekend. Boy do they love boost!

Like we said, today is a great day for engines old and new!

Let’s start with some Oldsmobile engines –