Turbo All The Things: Watch This Australian Ford Territory Mom Buggy Run 10s At 136 With A Boosted Six 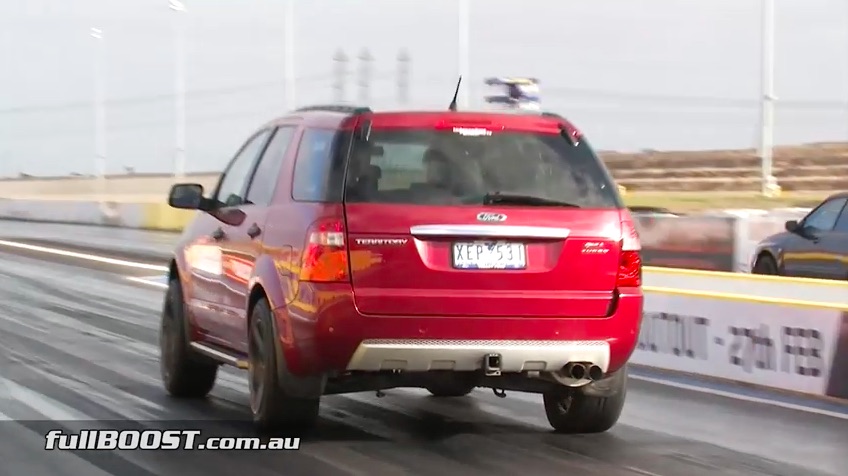 Remember the days before turbochargers were widely accepted and used in hot rodding. Remember when they were largely exotica reserved for weird little European engines that produced shocking amounts of power for their displacement? Remember when having a 10-second street car meant that the thing was a clattering, banging, noisy, horrible to ride in torture chamber with a cam that had ramps like cliff faces? We remember those days as well. In the current times you can own a mom buggy station wagon and with the right pieces and tuning crank elapsed times and speeds that only hardcore drag racers would have even thought of a relatively short time ago. The difference is that now you can drive the car to work each day with the AC on, getting bizarrely good MPG, and passing emissions laws. Yes, we’re the spoiled brat kids of hot rodding history right now and there’s no reason NOT to love it!

The car shown here is a Ford Territory which is a crossover SUV that tips the scales at 4,500lbs stock. They can be ordered with a turbocharged version of the 4.0L inline six engine and we’re guessing that this one started that way and has been built to the hilt off of that platform. The caption on the video from the FullBoost YouTube channel says that the owner of the car is shooting for the 9s with this combo after more track testing is done. The engine has a Borg Warner S300 turbo that makes 24psi in the current setup. The bottom end of the motor is forged and it has a set of Aussie Falcon camshafts in it. It has Bosch injectors, a large diameter single exhaust, and is daily driven. Oh, it also makes 645hp and all of it goes to the ground through the AWD. No word on how beefed, if any that system is. You will see this thing smoking the tires on one run. Serious freaking business!

All of this leads to one question. How fast will unsuspecting junk be going in ten years from now?!

Motorized Freak of the Week: The Hornsby Steam Crawler Tractor Watch a Motorcycle Racer Crash Out of a Hill Climb Less Than 15 Seconds After Starting

One thought on “Turbo All The Things: Watch This Australian Ford Territory Mom Buggy Run 10s At 136 With A Boosted Six”