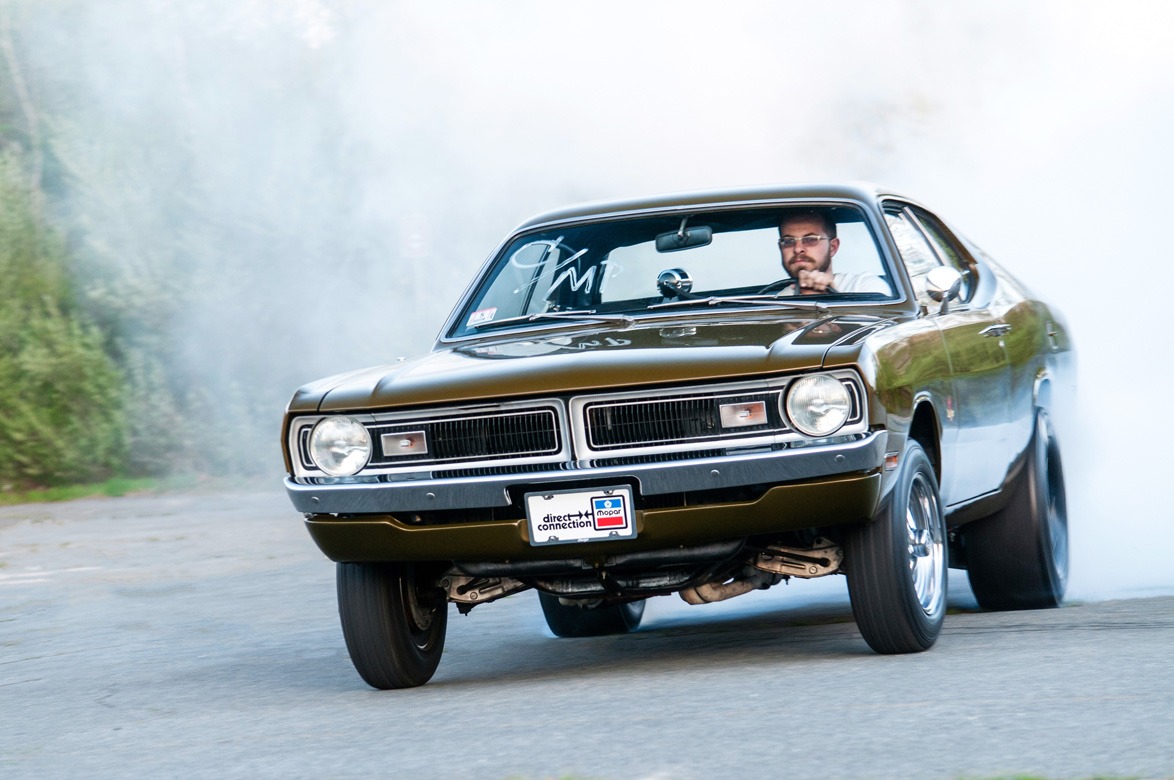 (Photos by Dave Nutting) – We all do the hot rodding thing for different reasons. We have different tastes, different motivations, and different opinions on how to best capture the right look and feel of a car. In the case of young Andrew Bostrom, it was being regaled by stories of drag strip fun and glory by his dad, talking about the era he raced in, which was the early 1970s. After growing up and being enthralled with those stories and eventually the history of that era on the strip, it was only natural that his tastes and style would be marked by that era heavily. Now that you know that, the fact that he’s built one of the most bitchin’ 1970s drag themed street cars we have ever run across makes total sense. Oh, and about that comment in the title of the story about him being born late? Yeah, he’s in his early 20s. The fact that he did the homework, tracked down the period pieces, and invested every red cent possible into this car is a big point of pride with him and it should be. He totally earned the right to brag on this thing and we loved drooling all over it while shooting this feature with Dave Nutting.

There’s a purity to this car that’s really tough to accurately describe because often times when we see guys built a car that “is just like they were in the old days,” they’re really not. Because you smashed some cool lace paint onto your street machine with EFI, overdrive, and zooty suspension, doesn’t mean that you have a car like the rest of the guys in high school had circa 1973. In Andrew’s case, he does. This thing is a gnarly cammed, big geared, drag suspended, raucous mother that both sounds and runs the business. Making 400+ horsepower at the tires with no help from nitrous, a supercharger, or exotic fuels out of 340 cubic inches is pretty awesome, especially when you see an old school Edelbrock intake, the ancient Mallory Ignition, Moroso Cool Can, and the sounds of a mechanical roller (yeah, the roller is a little modern but you can’t see the lifters!). This is a car that sounds like it wants to tear your face off. Andrew is done the vast majority of the work on this machine himself, at home, in a portable garage/car port thing that more spoiled gearheads wouldn’t even park under, let alone use as their primary shop space. We love that part. The determination of a kid to complete the vision in his head, complete with radio and heat delete is pretty spectacular in an age where more guys want to score high on shoot ’em up video games than actually apply themselves to something, especially a car that occasionally made Andrew want to shoot at it.

The story of the hows and whys of Andrew Bostrom’s 1971 Demon will be told through the awesome Dave Nutting photos and captions below. This car is 100% BangShift approved from the front bumper to the tail lights. You’re about to see why below –

KEEP READING AND SCROLLING DOWN TO SEE ANDREW BOSTROM’S 1971 DEMON, WHICH IS A MOPAR THAT PUNCHES ALL THE RIGHT BUTTONS – 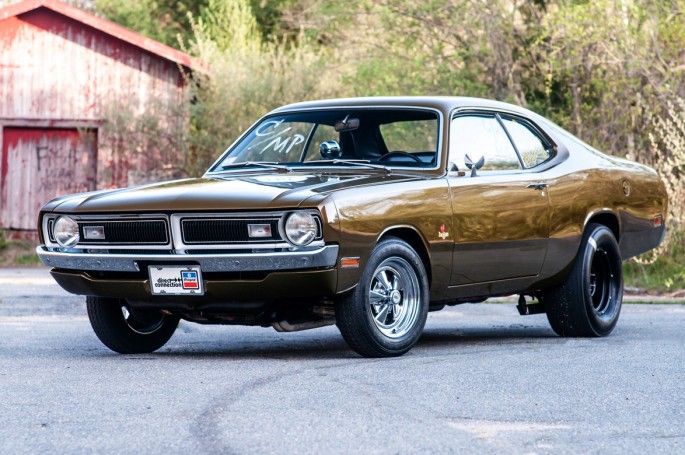 Here’s the car in all of its street brawling beauty. The machine has been a labor or love, sweat, and tears for Bostrum who is finally seeing the cool 1970s period drag car vision he dreamed of come together. Rolling on the slicks, he’ll drag race on this summer, the Demon looks really tough. 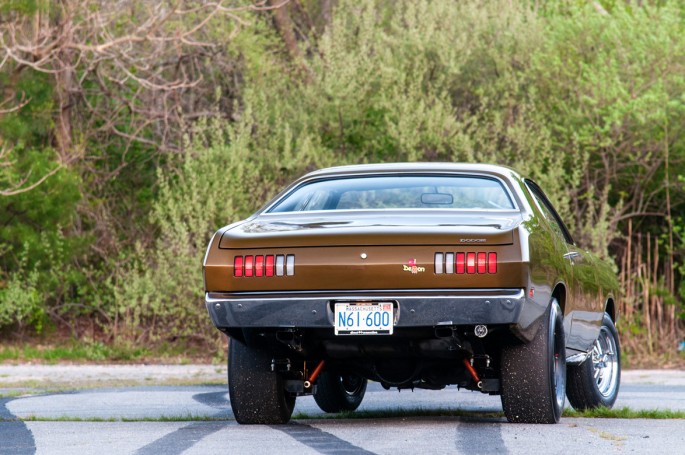 One of the things we really love about this car is that Andrew stayed true to the vision. Lots of times guys start with an idea and through a series of seemingly minor compromises end up with a car that doesn’t really look or feel like they want it to. Keeping a strict philosophy on this build, Bostrom didn’t waver from the plan and it shows. 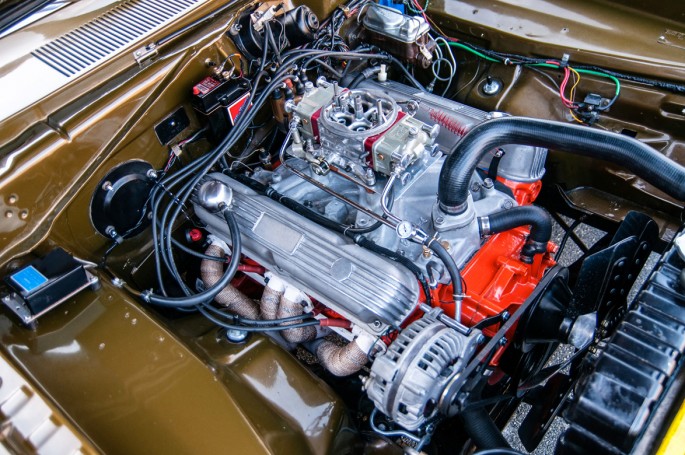 Oh boy is this little small block angry. Measuring out to a mere 340ci, it produced more than 420hp at the tires on the dyno rollers at 7,300 RPM. What’s the combo? Old school cool like the rest of the rig, that’s what. Starting with a stock bore 340 block, bored it 30, decked it 10, and cleaned up the oil passages while also undercutting the the forged factory crank 20 on the mains and 30 on the rods. He fully ported the factory J heads and with a set of domed forged pistons combined with a 20 cut on the heads gave him a very stout 12.5:1 compression ratio. Like we said, this is old school! With lead additive in the fuel, Bostrom claims that the car is pretty happy on the street and there’s no problems with detonation, etc. 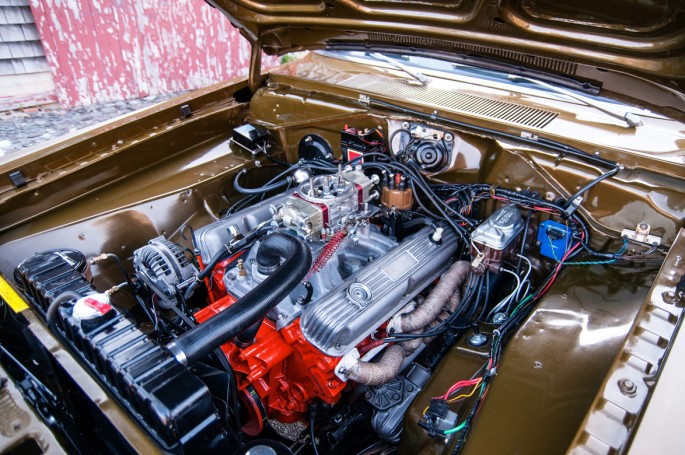 With lots of compression, few cubic inches, and better flowing heads, you know that this thing needs some camshaft to make the power in the upper reaches of the RPM range you’d expect it to. The cam that Andrew just jammed into the engine this year is a Howard’s mechanical roller measuring .585 and .585 on the intake and exhaust lift. The duration is a stout 290 degrees on the intake and 298 on the exhaust. To say that this thing idles like few small blocks we have heard on the street would be an understatement. The intake manifold is a vintage Edelbrock Tarantula that’s straight out of the 1970s and looks as right as rain in this car. Since this was a factory towing package car, it has a “big” radiator in it from the factory and it still handles the cooling duty up front. 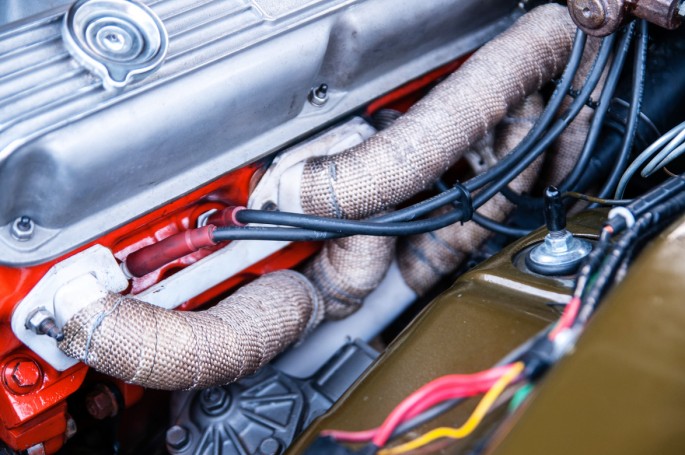 The white painted and DEI heat wrapped headers have 1 3/4″ primary tubes and fit the car like a glove. They also look completely bitchin’. 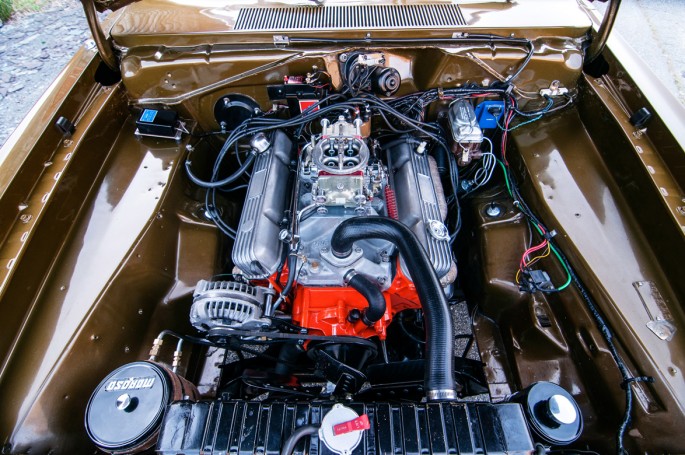 Clean and tidy? That’s the way Andrew likes it and that’s the way the whole car is. Every surface is this clean. The kid truly loves his hot rod. 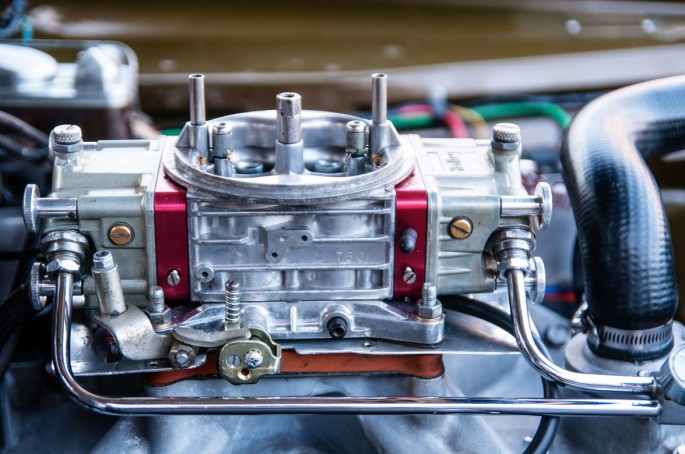 The carb is a cool mash-up of pieces. There are Holley bowls, a ProForm main body, Quick Fuel metering blocks, etc. It is packed with all the adjustability and tuneability that you’d want with four corner idle adjustment, adjustable air bleeds, and you can see the cool Mr Gasket vintage knob style bowl screws on the ends. An old school Cal Custom “Fly Eye” air cleaner normally tops this carb. 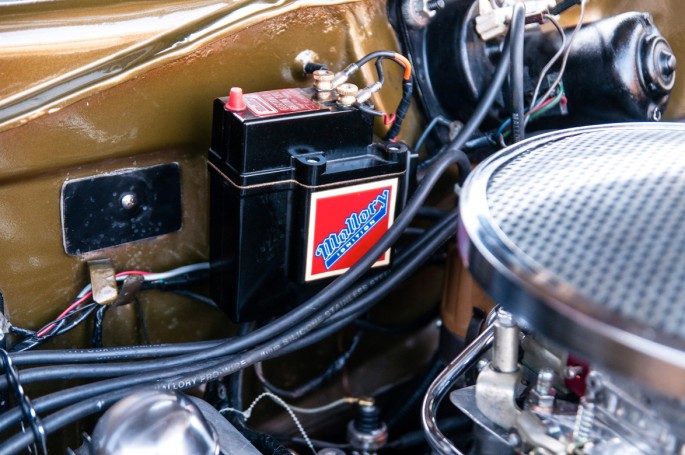 This vintage Mallory Rev Poll coil is one of the many old speed parts that Andrew hunted down while building this car. Combined with an old school Mallory Rev limiter, a factory distributor that has been re-curved, and a little help from a hidden MSD 6AL box, there’s plenty of juice to light the fire in this engine. 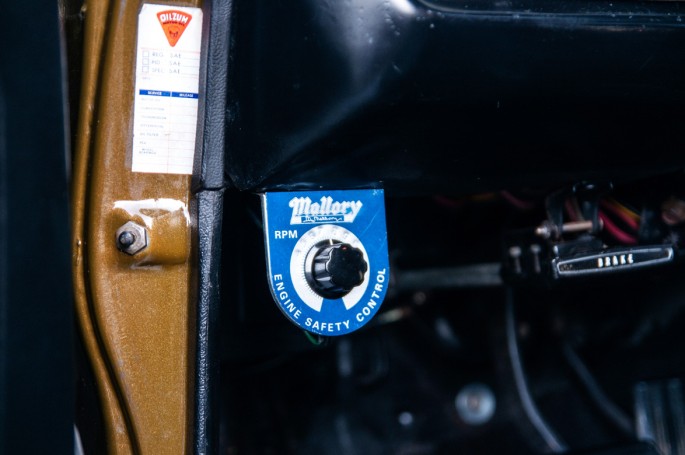 How cool is the adjuster on the Mallory rev limiter? Oh, and don’t forget the ancient Oilzum oil change sticker. 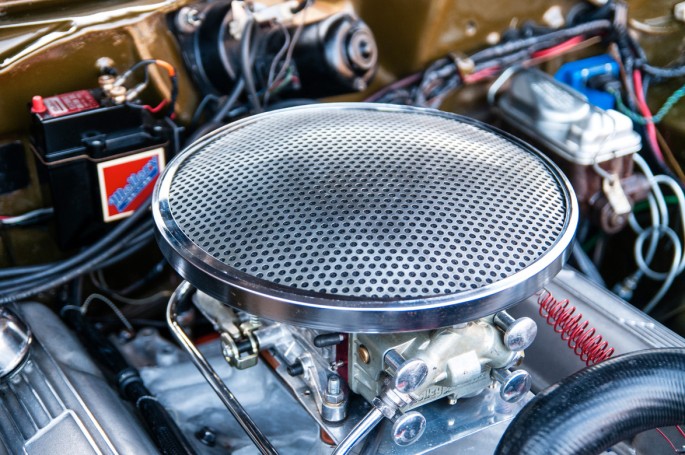 Here’s that sweet Cal Custom “Fly-Eye” we were talking about bolted to the top of the carb. 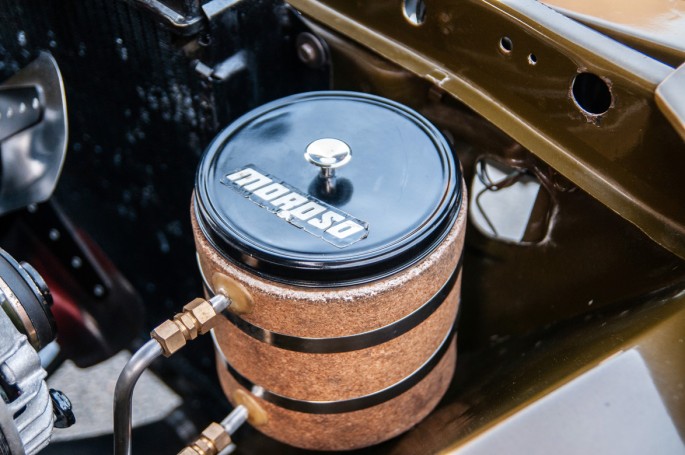 The Moroso cool can is a great addition to the engine bay and there wasn’t a race car at the strip without one of these guys in the 1970s. 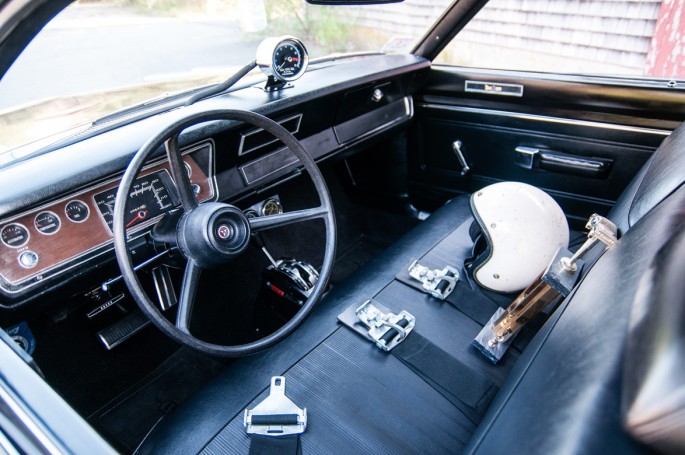 The interior is pure spartan coolness. The car is radio and heater delete, by Andrew’s doing. The idea here was to create a car that a guy would have tried to option and hot rod in the 1970s period. So if a dude wanted a light car with a small block and no frills to work up for the strip, he would have started with one sans heat and radio because that’s just weight no one needs, right? Aside from a few additional gauges, this thing is just as it rolled off the line in 1971. 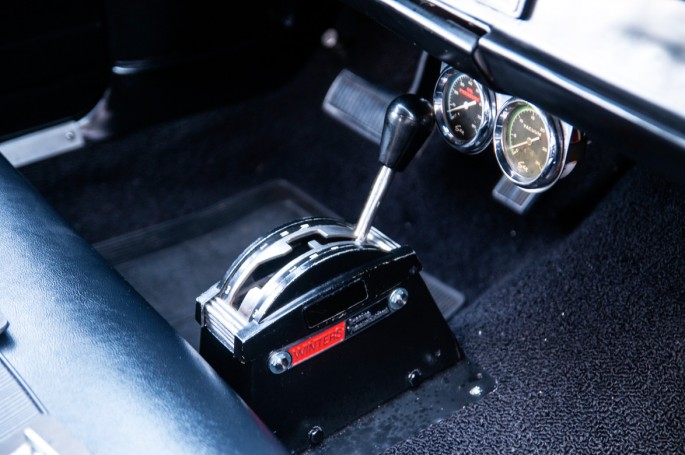 We’re totally blown away and completely in love with the early 1970s vintage Winters shifter. This thing looks amazing and we’re not sure we have seen another in a car for at least a decade. Bostrom tells us that Winters still stocks all the rebuild parts for these and he performed that task before sticking it in the car. How rad is this? The transmission in the car is a worked up 904a with a 9-inch Turbo Action converter that is rated for 3800 stall. 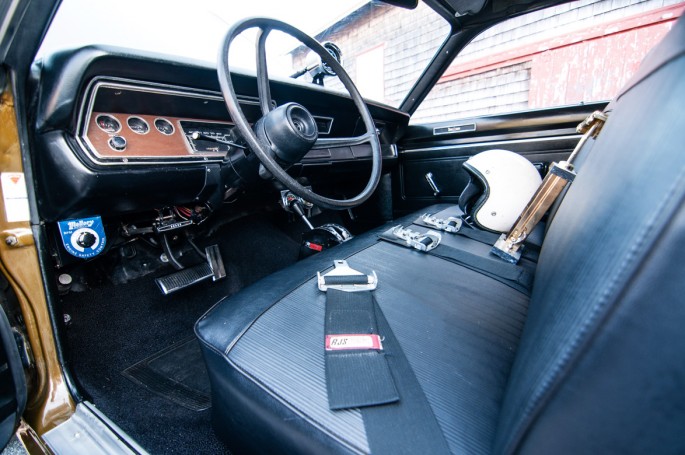 Puritanical perfection, right? This is a zero frills Chrysler. 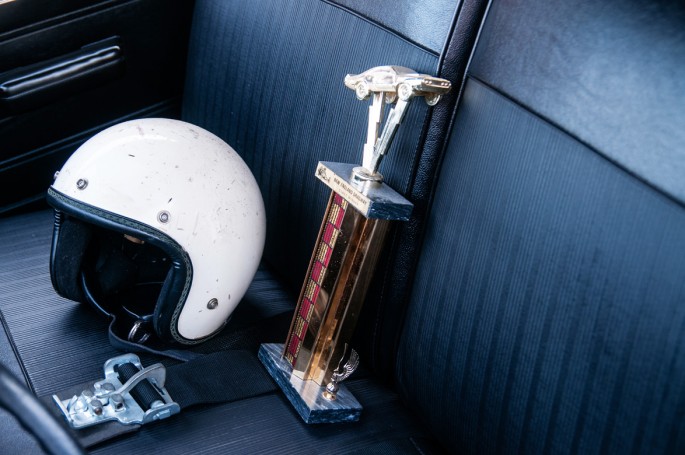 The vintage Bell helmet came from a friend and the vintage New England Dragway trophy came from Andrew’s pop who was a racer in the 1970s when this car would have been new. Pretty boss.

Let’s talk suspension! The front suspension consists of factory control arms that Andrew boxed himself, poly bushings, slant six torsion bars, and Competition Engineering drag shocks. The car is a manual steering style setup, which is what you expected…or should have! 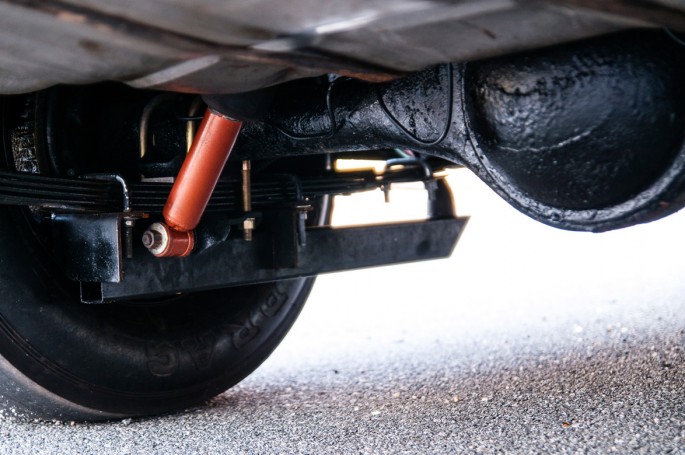 The rear end of the car is spectacularly 1970s as well. For the street, the 8.75 rear end has a Sure Grip and 4.10 gears in a 489 chunk and for the track there’s another 489 chunk that has a spool and 4.56 gears in it. The rear suspension is right out of the ol’ Mopar drag playbook with super stock leaf springs, a Sox and Martin adjustable pinion snubber, Lakewood slapper bars, and solid aluminum springs bushings. The air shocks are a pretty sweet touch. While Andrew has not yet drag raced the car, he’s going to this summer and we’re looking forward to see how it runs. 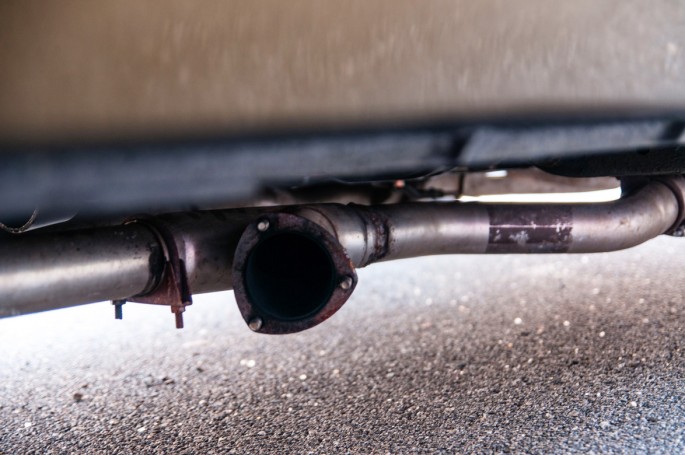 Dumps open, baby! The exhaust on the car is 2.5″ mandrel bent stuff that has a set of Flowmaster Super 40 mufflers knocking some of the sound down. 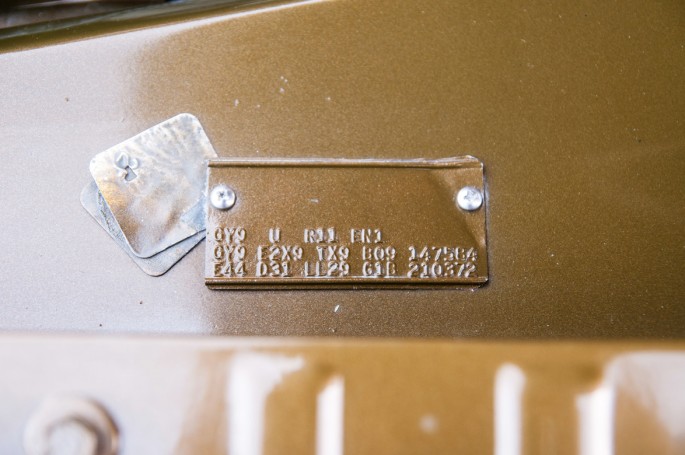 The color of the car is pretty interesting. This is the early shade of GY9 Tawny Gold, which was the factory color that this car came in. Andrew told us that the color changed slightly in later years but this is the one that’s correct for a 1971 car. Several of the panels on the car were acid dipped to lighten them up. These include the doors, hood, and valance. The battery lives in the trunk and the whole thing is a flyweight, coming in at 2800lbs with him in it. 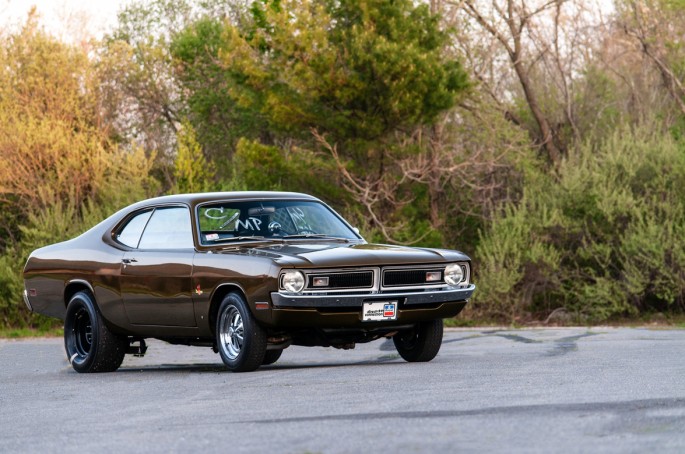 We’ve always been attracted to “simple” cars that don’t beat you over the head with how neat that they are. Cars that require a little bit of a look to truly appreciate them and this is one of those cars. 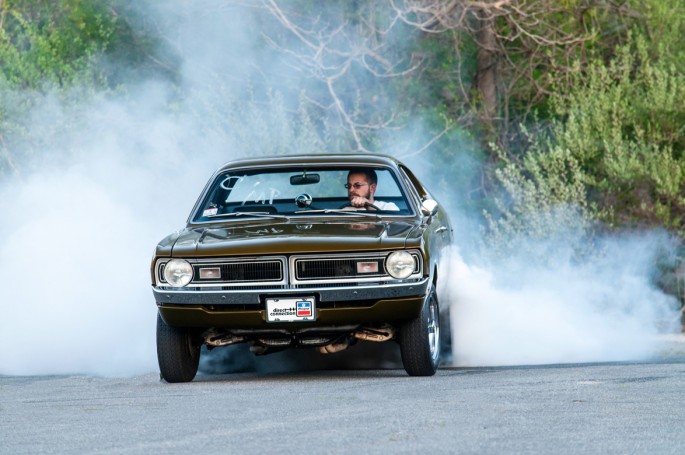 In case you doubted this car and figured it was some sort of a trailer riding, baby diaper polished show queen, Andrew ripped off a couple of mondo burnouts for us. The car sounds boss and we’ll have video up of the burnouts and the gnarly idle for you to enjoy next week. 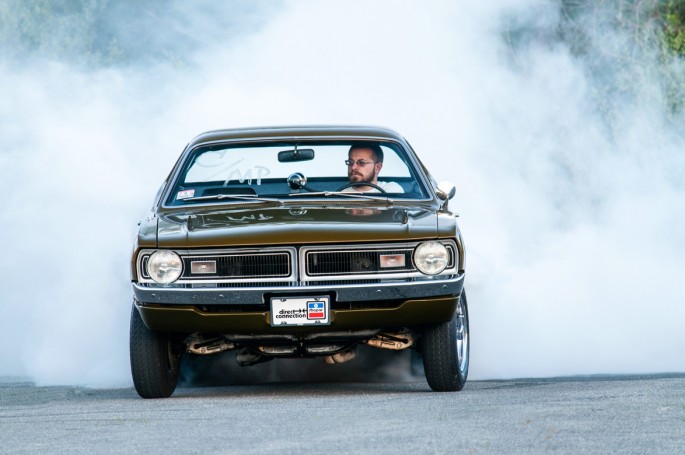 Those slicks got broken in well by Andrew as he wound the car up and really gave it to ’em! 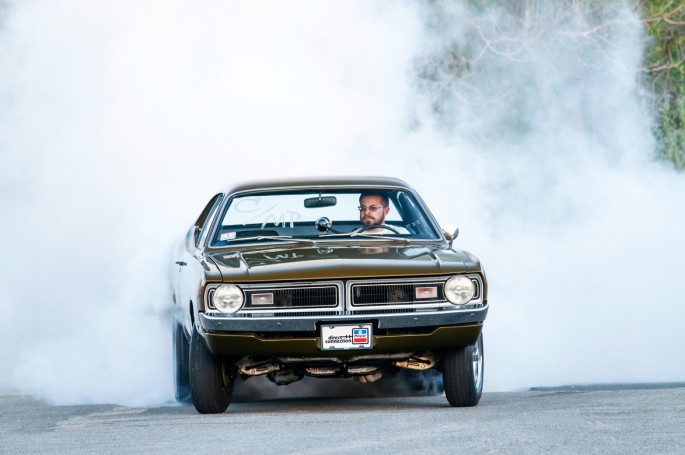 For the first time in BS history we actually got permission from the police to do this. 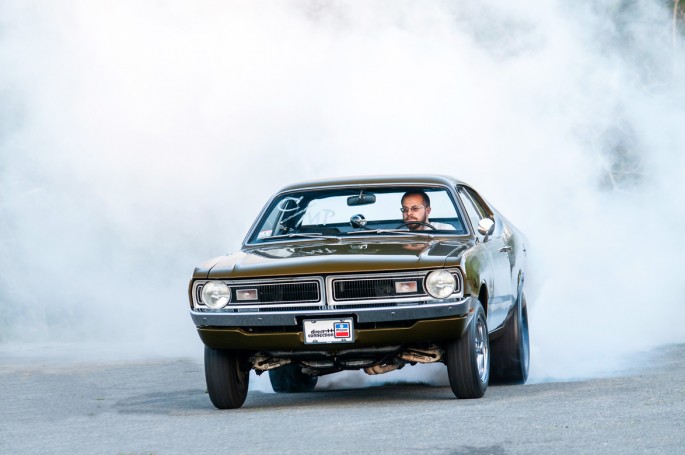 Looking like a drag car coming out of the hole, we cannot wait to see this car on the strip. 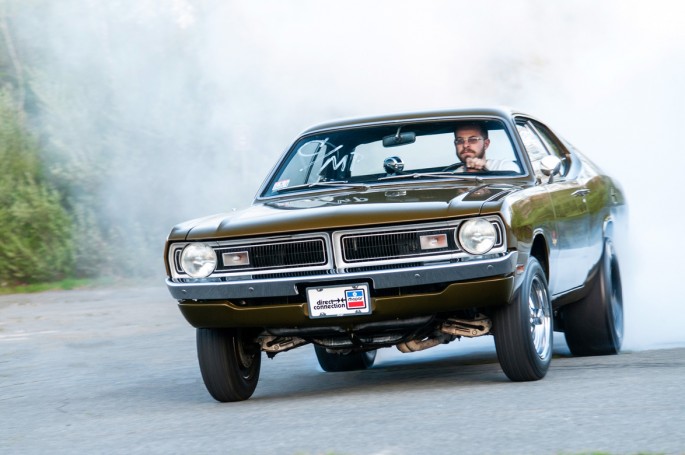 This photo feels like it belongs on the pages of an old copy of SS&DI. 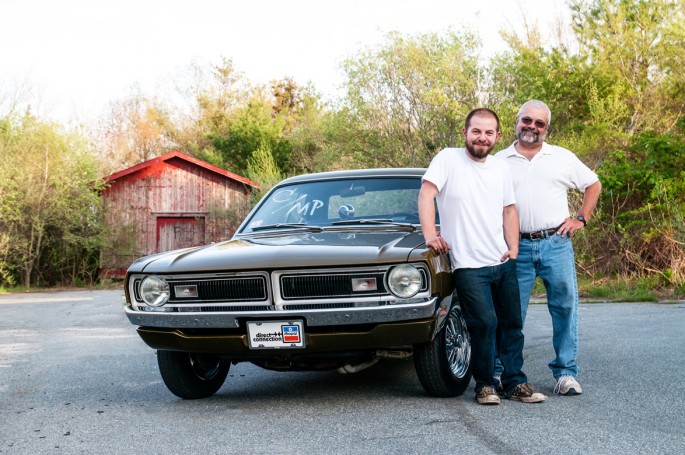 Here’s Andrew and the man who inspired the build of this car, his pop. How neat is it that the kid was so inspired by his dad’s exploits that he created a more hairy version of a car very similar to the one his pop competed in. 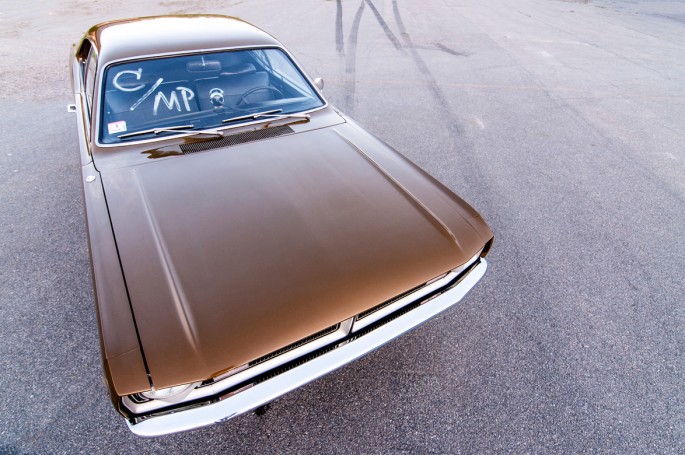 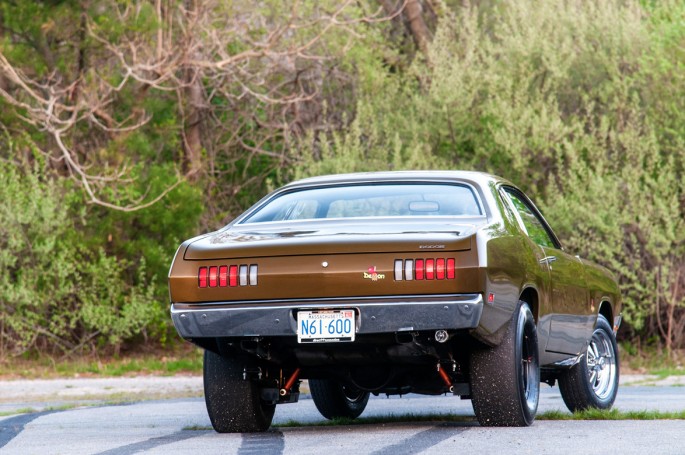 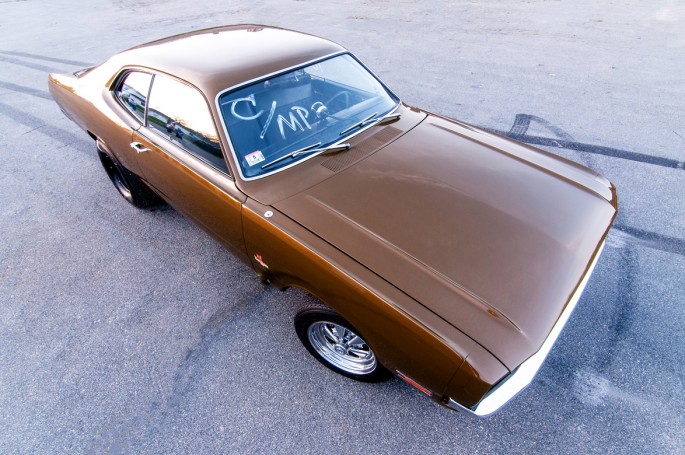 24 thoughts on “Vision Quest: This Period Perfect 1971 Demon Was Built By A Kid Born 20 Years Late”