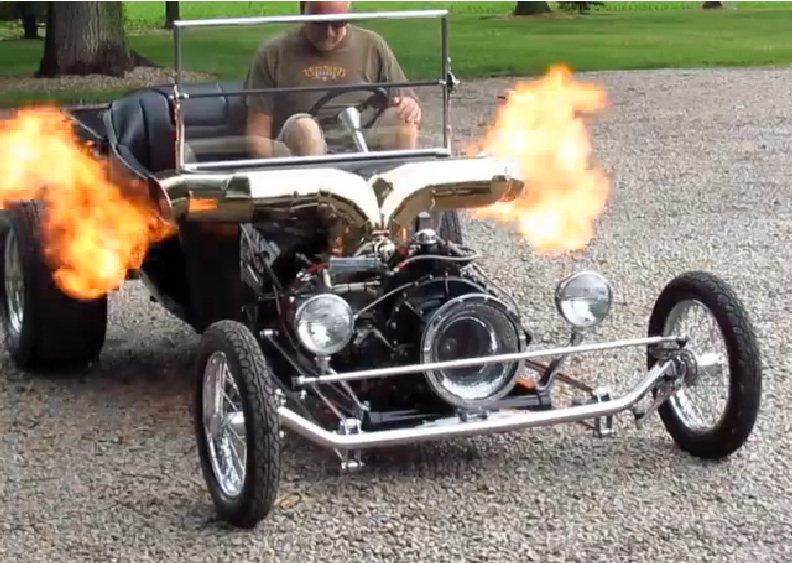 Over the winter time we showed you car show photos of a turbine powered t-bucket and we kind of marveled at how awesome it was. We also wondered if the thing actually ran or if it was just a show piece that was built to get attention and show off some nifty fabrication work. Good news, kids! This thing runs and we have the video to prove it below. I know that Chad hates t-buckets and all but I am thinking he would make an exception for one that belches fire and looks like this one. The thing is totally neat and we’d like to be in it when the driver was laying into the throttle to feel the power. We would not like to be next to it where the hot exhaust would be melting everything in its path but that is the problem of the people next to the car, not ours.

The engine is a Boeing 502 turbine which is a little piece but one that can (potentially) pack a pretty good punch. We have no idea what version of the 502 is actually in the bucket but we can tell you that the power levels on these things ranged from 175 all the way up to over 300hp. Because this is a hot rod, let’s assume that this is the “warmer” (get it?) 300+ hp version. The bucket is shown being started with and without a fireball out of the exhaust. Naturally the fireball out of the exhaust seems like the preferred method, but sometimes you may actually like the people parked next to you at the cruise night and melting their mirrors off wouldn’t be something you want to do.
One of the people who commented on this video when it was originally posted on FB simply asked, “Why?” That person is obviously clueless or doesn’t get the idea of pursuing an idea to satisfy something inside of you. That’s what most of hot rodding is about, satisfying yourself. This guy looked at a turbine engine and a t-bucket and thought, “Perfecto!” Thankfully he did and he carried the project out to the conclusion because this is a mean little runner and it seems like a really fun car.

More footage of the Turbine T-Bucket, including fire show and start.

Would You Pay $1.1 Million For A 2003 Volkswagen Beetle? Coming To Australia: 24 Hours of LeMons! See What Happens When Crapbox Endurance Racing Goes Down Under!