Pro Touring Vs Germany: A Killer 1966 Mustang Takes On A Porsche 911 Turbo S At The Streets Of Willow! 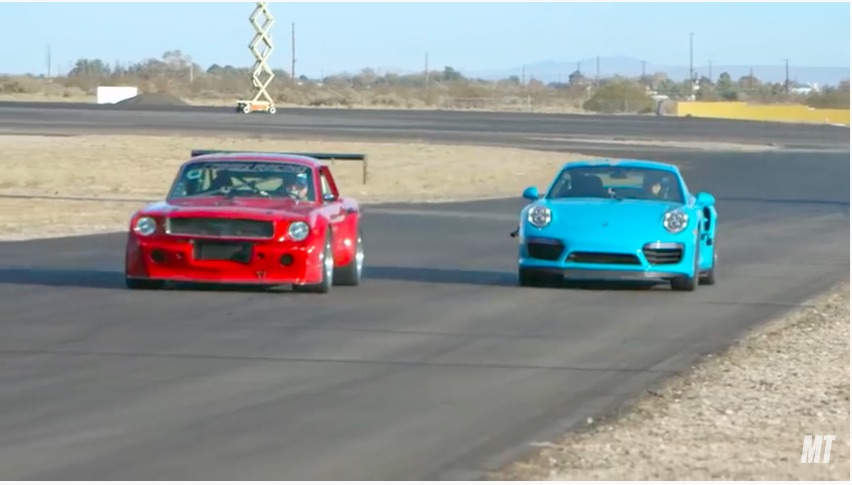 Well this is a fun surprise! A couple years back, I was part of a show for Motor Trend called “Put Up or Shut Up”. It went for two seasons and the idea behind the show was simple. Race stuff that was different and cool or create cool and fun races pitting vehicles either against each other or against different circumstances than they normally compete in. For example, we made episodes where different classes of dirt track cars competed, we drag raced multi-engine pulling tractors with sleds on them against each other, we raced big rigs, and the list goes on and on.

The shows were really fun (and stressful) to make and lots of times we were hustling down to the wire to get the cars and the venues lined up. The hustle did result in some amazing fun with talented people the likes of which I never in my wildest dreams of life ever figured I would work with.

As all of the episodes are on the Motor Trend App it seems like the company is bubbling some of the older stuff up and they have posted an episode on the YouTube channel that you do not have to have a subscription to watch. This was one of my favorites.

We took a 1966 Mustang that is one of the hardest core pro touring runners in the country and raced it, wheel to wheel against a (then) brand new Porsche 911 turbo S which was driven by Randy Pobst. We did it on the Streets of Willow road course in California and it was a riot. The Mustang was also driven by a pro-level road racer so we tried to make things as even as possible.

The result? Well you have to watch for that but this was about as good as it gets when you take two totally different things and throw them on a race track together! Awesome fun and better memories.

Press play below to see a full episode of the ol’ Put Up or Shut Up series!

A Bad Night At The Pull: Watch The Weight Box Fail On This Sled And The Tractor Head Off The End At Speed Nitro Time Machine: The Day Don Campanello Tasted Pro Stock Glory At The 1986 Gatornationals

2 thoughts on “Pro Touring Vs Germany: A Killer 1966 Mustang Takes On A Porsche 911 Turbo S At The Streets Of Willow!”