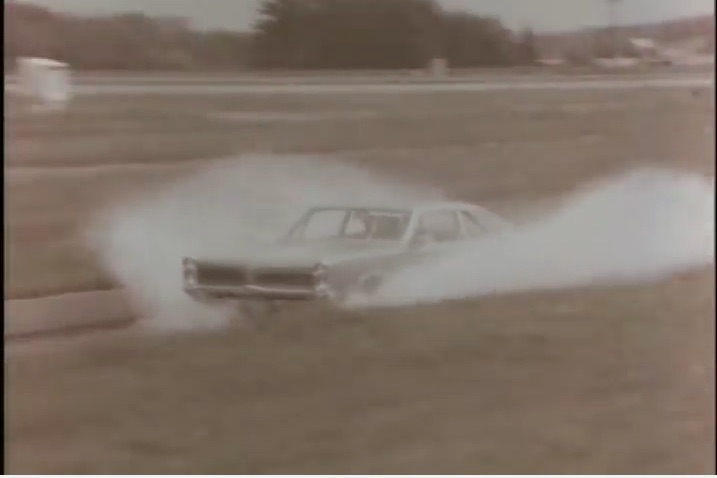 If 1964 blew the lid off of the fact that kids had money to spend on cars, the ensuing years were where manufacturers made their direct play to the youth market in the country. From pony cars to monsters like bug Pontiacs you are going see here, it was all about luring a young guy or girl (primarily guy) into your showroom and getting them to take a test drive in the 300-400hp dream machine of their choice. It really changed the way the industry did business on some level because it was the first time where performance was not just a factor in making a buying decision but THE factor in making a buying decision. Some young guy didn’t really care about styling if the car he was buying would get the brakes beaten off of it at the drags and at the stoplight Grand Prix.

The 1966 Bonneville four door hardtop that is shown in the film as the example of a car dealers would want their guys selling is stunning. The car is absolutely massive and dunked from nose to tail in black paint. The Bonneville was at the top of the Pontiac line and the Brougham model was shown with all of its gadgets and gimmicks intact. We chuckled when the video host implored sales people to upsell customers on the vinyl roof option.

If you are only interested in the 1966 GTO part of the program, fast forward to 17:00 into the whole film. That’s where the full on pitch for Pontiac’s performance work horse falls.

This whole thing is greatness!

Press play below to watch Pontiac: Wide Open World Of Youth From 1966!

Fire Dance: Watch The Rice And Williams AA/FD Cackle At Night On 100% Nitro - So Cool! Watch This Aussie Valiant Explode A Transmission In As Grand A Fashion As You Will Ever See At The Drags