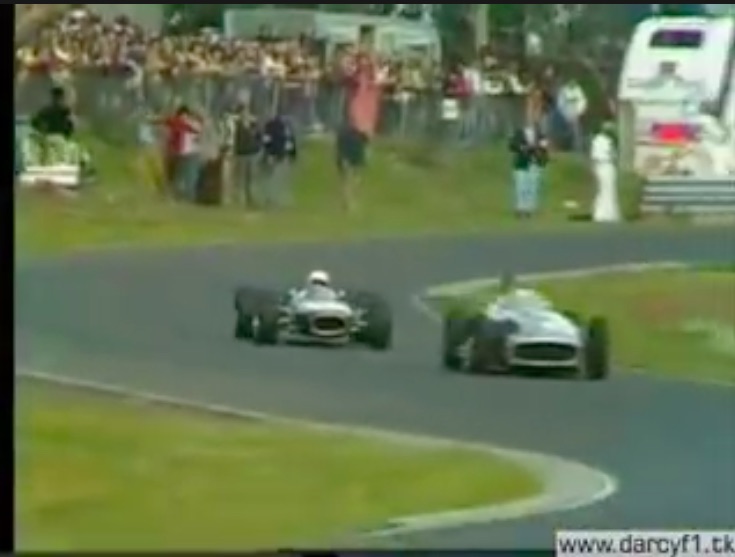 Now this is flippin’ awesome! You are about to watch two Formula One legends throw down in vintage F1 cars at the 1978 Australian Grand Prix. Well, let’s revise that. You are about to watch them throw down AFTER the 1978 Aussie Grand Prix, which was a Formula 5000 race at the time. The drivers are Jack Brabham and Juan Manuel Fangio. Three times champion was Brabham and five times champion was Fangio. Brabham was in one of his 1960s BT19 race cars and Fangio drove a 1950s W196 Mercedes. Famously, Fangio was asked to make a demonstration drive and he said that he had no interest in a demonstration drive, he was planning on racing…and he did.

The Brabham being the newer (in comparison) and more advanced car had some pronounced advantages but Fangio drove the Mercedes with the smoothness and precision that garnered him all those titles as an “old man” back in the 1950s. Of course Brabham remains the last and basically only person to win F1 titles in cars that he designed and built himself!

This is an interesting and awesome piece of video starring two legendary drivers and two even more legendary cars.

Press play below to see this awesome exhibition between Brabham and Fangio!

Deeper Down The Rabbit Hole: Uncle Tony Tests A Weirdo Fuel Vaporizer System - Does It Raise Economy? Wild Video: Watch A Pilot In A 1950s Fighter Jet Slide Off The End Of A Carrier And Get Saved

2 thoughts on “Racers Gonna Race: Watch This Incredible 1978 Footage Of Fangio and Brabham Throwing Down In Vintage F1 Cars!”