BangShift Road Test : The 2016 Subaru Series.Hyper Blue BRZ Is The Sharpest Tool In The Shed 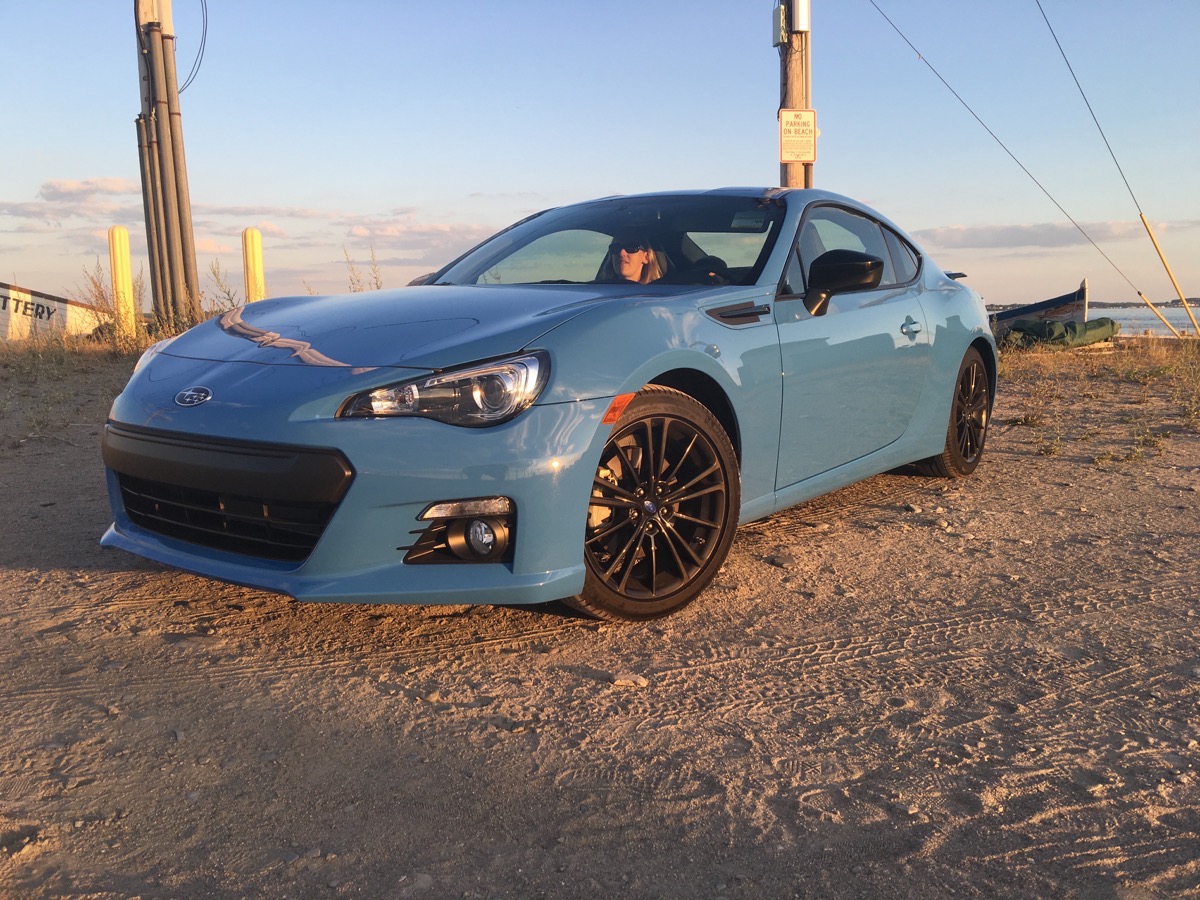 I have never been accused of being the sharpest tool in the shed but the fact of the matter is that the 2016 Subaru Series.HyperBlue BRZ is. The car is engaging, hilarious fun to drive, coolly styled, and in this very limited exterior hue, very rare. The Series.HyperBlue is an extremely limited run of Subarus with only about 500 of them slated to reach American shores. All of this adds up to an amazingly fun package that attracts attention from every direction and draws in Subaru fans like a big blue bug light. In my time with the car I did lots of varied driving. From around town to the highway, two people and four, the car was used like a normal person would used it and occasionally driven like an enthusiast would drive it as well. I put enough miles on the car to have an honest opinion on its high and low points and one side of that list is a lot longer than the other. 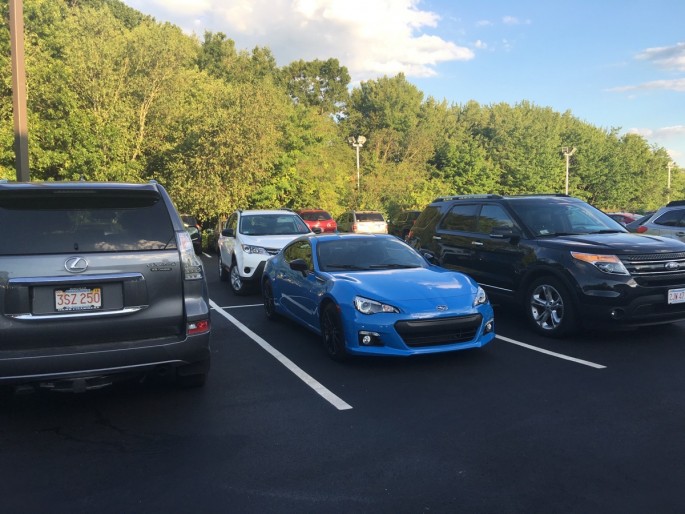 Yes, the car really is that small and that blue! We wanted to give this impression of the car in the real world because it speaks to why a 200hp engine makes it in and scooty. We also wanted to show the BRZ’s size against the typical family tank being driven in America today.

For starters, the BRZ is one of the last real sports cars that anyone is building in large numbers. As much as I want to believe it, cars like the Mustang, Camaro, and Challenger have swollen so much and changed so much that I really consider them either muscle cars or grand touring machines. Those cars are not the sharpened tool that the BRZ is. The 200hp engine has been a point of contention for some people and while I’m not opposed to this car having 50 more horsepower, I can say that if you drive the car as it wants to be driven you’ll not be begging for a significant upgrade in that department. Sports cars have always will be about balance and that is what this car does so well. 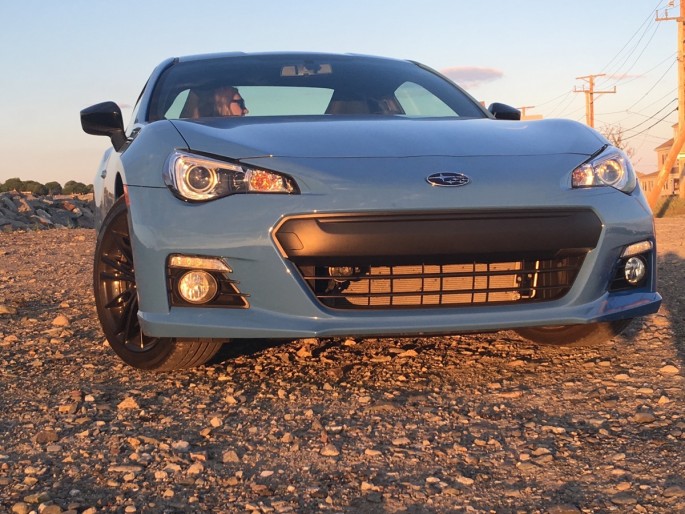 While the differences in styling are subtle we think the BRZ is the better looking car in the BRZ VS the Toyota FR-S. The Hyper Blue color was fantastic in all lighting and the blacked out badges, mirrors, and wheels added to the dramatic look.

One of the areas where the really thoughtful engineering in this car come to the fore is in the tire selection, not the brand but the size. The BRZ rolls on small rubber. I’m talking a 215 section width which means that the tires are the first fusible link with the pavement and a key element into making the BRZ into a riot. There’s enough grip to give the driver ultimate confidence that he or she will make it around the upcoming bend but not too much that the little 200hp engine cannot break the tires free when you want them to be allowing you to have the maximum amount of fun that you can have outside of other more adult activities. 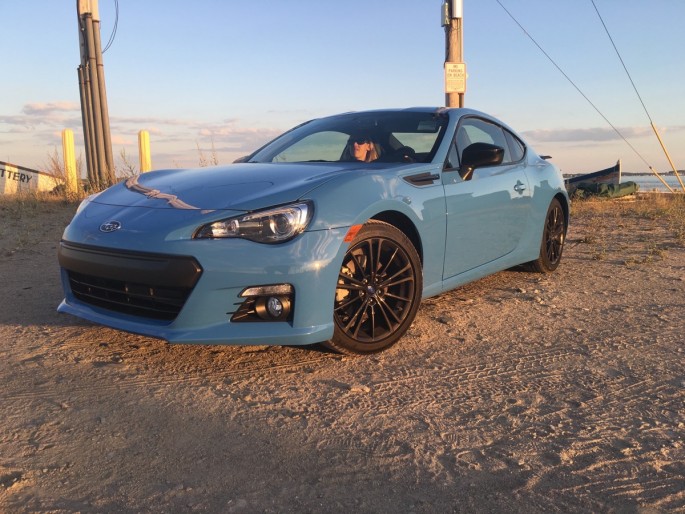 If you can look at this car and not be emotionally stirred in the slightest you need to find a new hobby to pick up. Maybe croquet would be more your speed? This little car has some fantastic lines.

The car is obviously small and sports cars are but I was able to get a family of four into it for an evening of dinner and cruising the beach. The kids are seven and nine and it was tight but I’m not so sure that the same thing will work when those same kiddos are 17 and 19 and even by then I may not want to try it again! The interior of the car also gets tweaks in the materials and color department as part of the Series.Hyper Blue package. It is comfortable, classic, and actually pretty comfortable in there when two people are in the car and the seats are all the way back. As you would expect, this would not be the best family car as space is at a premium everywhere you look inside the car. As a second car though? This thing is the best. 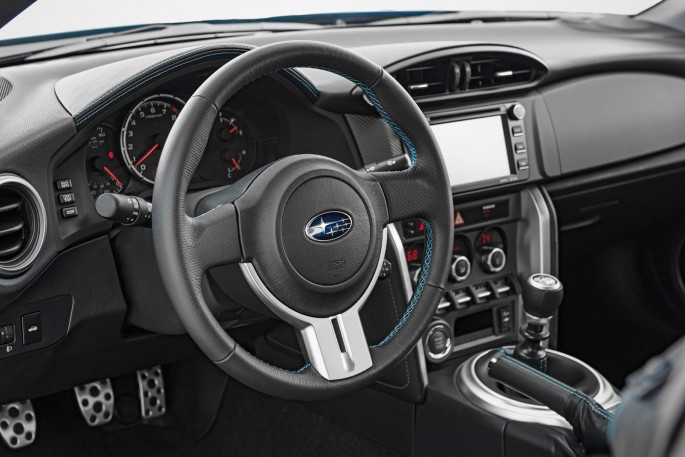 Note the hyper blue stitching on the wheel and through the interior. Sitting in the driver’s seat of this car is like being in the cockpit of a fighter plane. So much fun. 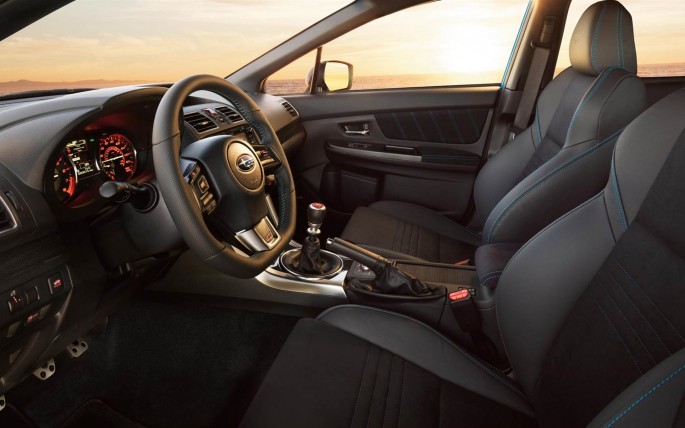 Here’s a wider look at the front seats and driver/passenger area. The thick rimmed wheel is flat on the bottom to make ingress and egress easier. We found the seats to be amazingly comfortable and grippy. That shifter handle is attached to one hell of a six speed. The transmission is surgically precise.

Our tester was equipped with the six speed manual transmission as opposed to the automatic and having had some experience with the Scion FR-S earlier with an automatic So I can can saw unequivocally that the manual transmission is 100% mandatory when buying one of these cars whether it is a Series.Hyper Blue or not. As a machine purely derived from the idea of giving the driver the ultimate experience and providing high levels of handling performance, putting an automatic in this car both kills its potential and reduces its fun level exponentially. Being able to run through the gears up and down really makes you feel more connected the car and it is way more fun than just pulling the shifter into D and finding a place to rest your hand. The car is so fun to drive with the six speed that I kept forgetting that the radio was off. How? Because I was paying attention the car, the road around me, the gauges, and all of the stuff that makes driving the fun and pleasurable experience us gearheads love. 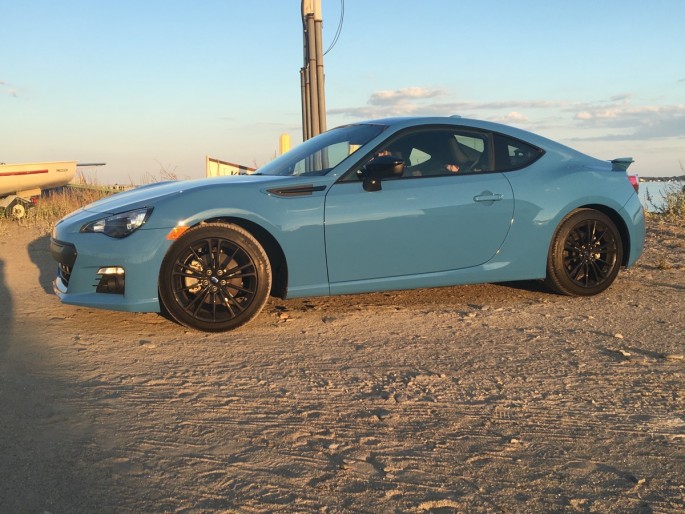 This is by far the most fun car dollar for dollar on sale today. It is a pure sports car that ignites every one of your gearhead senses when you are driving. We were in love with this one by the end of the week. 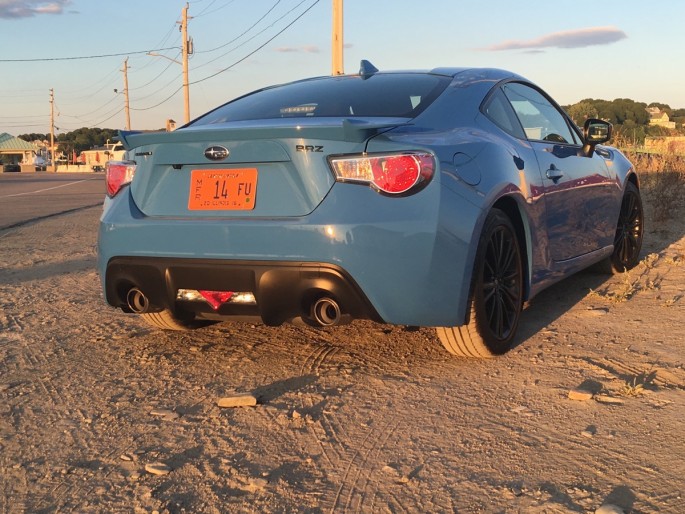 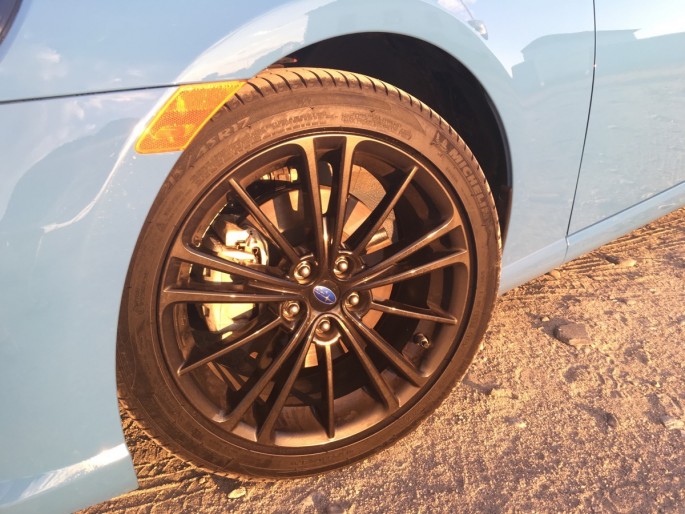 The ticket price of our tester came in at just under $29,000 which I think is spectacular money for a car this fun, capable, and ultimately collectible. With only 500 of the Series.Hyper Blue cars being built you may not get the awesome color but you will get the same fantastic experience behind the wheel that I had and a craving to keep the fun going!

When we saw this view of the car driving away the day after shooting these photos we were sad. The 2016 Series.Hyper Blue Subaru BRZ is 100% BangShift approved and we think you’ll love it if you slip behind the wheel.

An Awesome Behind The Scenes Look At Moroso And Every Aspect Of The Business From Fabrication To R&D Would You Plasti Dip Your Own Project, Instead Of Painting It?

5 thoughts on “BangShift Road Test : The 2016 Subaru Series.Hyper Blue BRZ Is The Sharpest Tool In The Shed”