THE MONGREL RIPS AT THRUXTON CIRCUIT: The Ford 100e On A Miata Chassis Hauls Ass On The Road Course!

Jul 30, 2021Chad ReynoldsApex Car Feature, Apex Spotlight, Apex VideoComments Off on THE MONGREL RIPS AT THRUXTON CIRCUIT: The Ford 100e On A Miata Chassis Hauls Ass On The Road Course! 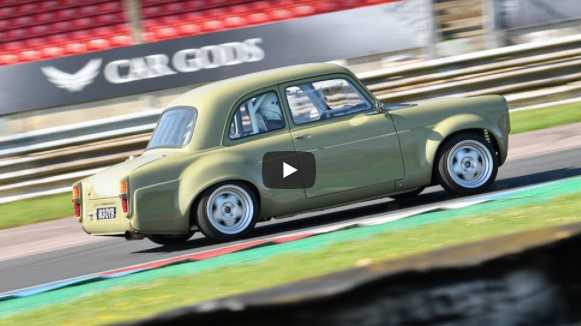 This isn’t the first video of the Mongrel on the race track, but the first one was a shakedown for sure and not in ideal conditions. Plus, Matt got black flagged for being sideways a bit too much during the open track day. The car needed some tweaks, as it is a brand new build, and he’s made some adjustments and gotten this little sucker ready to rock again. I love this little car, because the entire build was super fun to watch, and because I know this thing has to be a riot to drive. Look at it, it’s got the handling and performance of a Miata, but with a much more interesting body. Sure, I’d love it with even more power, but I love the way this thing works!

If you haven’t been following the Mongrel project here on BANGshift, then shame on you. It is a bad ass little ride that is built from an old English Ford 100E body that has been channeled over a Mazda Miata floor and chassis. Of course in Great Britain, where the Mongrel was built, they call the Miata an MX5. Matt from Urchfab is the brainchild and sicko behind this great project and a guy that knows his way around a race track. He built this car from scratch in his own shop, not only fabricating the parts and pieces required to marry these two cars, but also the cage, custom suspension pieces, and so much more. There is a lot going on in this “simple” little track car project and I’d drive the snot out of this thing.

CLICK HERE IF YOU HAVE MISSED ANY OF THE MONGREL BUILD

Whether you are a fan or not, anyone that knows anything about cars that handle curves knows that the Mazda MX5 Miata is one fun little go-kart of a car. Sure it’s small and cute and that makes it not very “manly”, but when you wrap one in the body of a boxy little English Ford, then it gets much gooder in a hurry. Check it out on the road course for the very first time below. It looks like a riot.