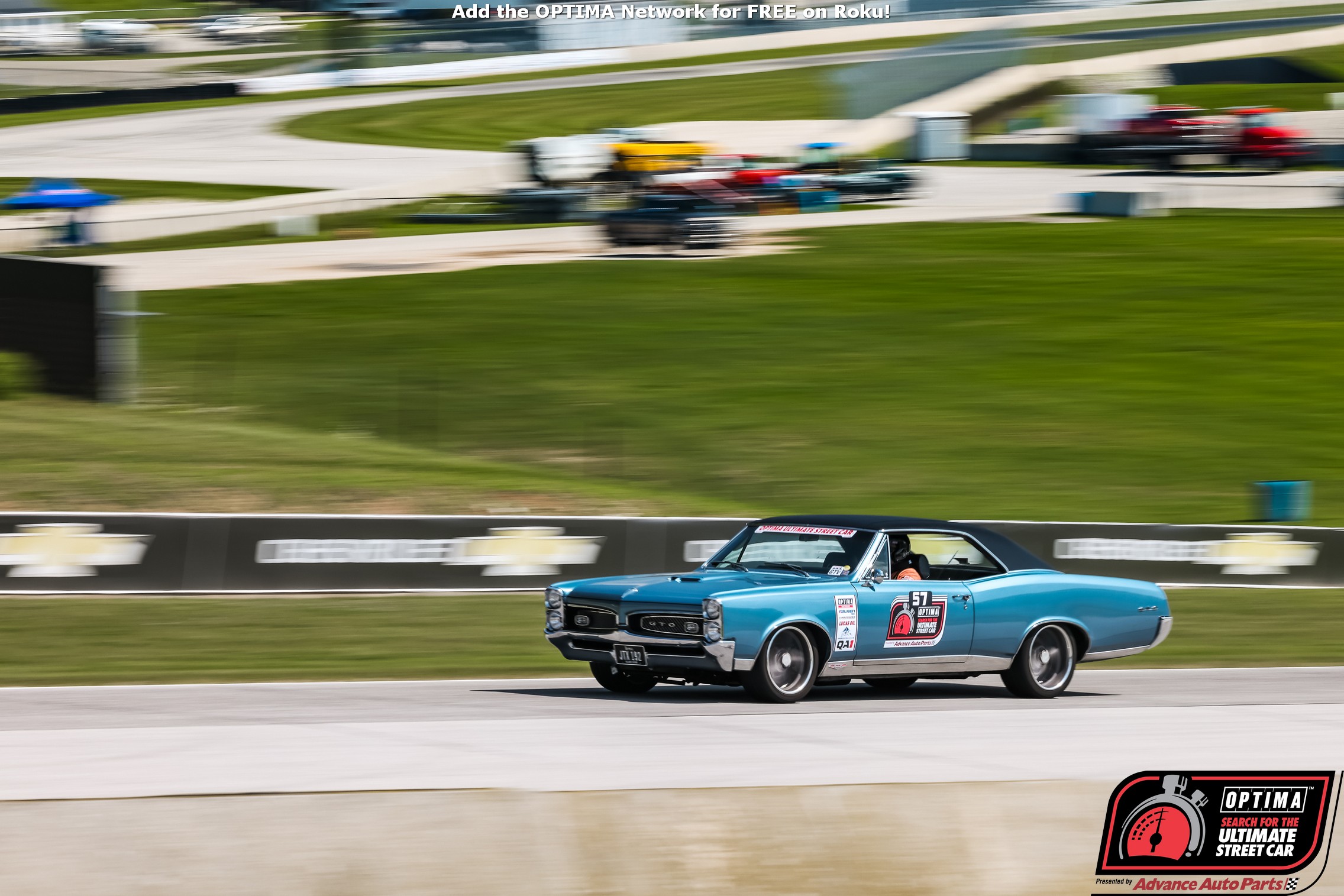 Six of seven regular-season events are now in the books for OPTIMA’s 2021 Search for the Ultimate Street Car, presented by Advance Auto Parts. Road America was the most recent stop, where seven more cars punched their ticket for the 2021 SEMA Show and the OPTIMA Ultimate Street Car Invitational (OUSCI). While this stop provided clarity for some, it only offered chaos for others.

Chris Smith looked like a heavy favorite to win the Classic Car Liquidators GTV Class championship, based on his first run of the year in Atlanta. However, it takes three great outings to put together a championship season in this series and Smith’s crankshaft had other ideas at Road America. With Smith’s Camaro down for the count, the chase for the championship suddenly came into reach of several other competitors.

Nick Relampagos’ ’73 Camaro is currently in the lead, but only by two points after Jason Bottenfield’s ’69 Camaro closed the gap at Road America. Jim Stehlin’s ’73 Camaro also got work done and he’s now in the mix as well. This battle may be limited to Camaros, but it isn’t limited to the first two generations, as Wayne Atkins’ ’85 Camaro has as good a shot as any of them at taking the title. Bowling Green, Kentucky is a bit of a haul for Atkins and Bottenfield, who will both be coming up from Texas, but don’t think for a second that Nick Relampagos will just sit back in California and see if anyone can beat him.

Jonathan Blevins may have sewn up his third-straight GT Class championship in Atlanta, but that class saw a first at Road America, when Sam Tennessen’s ’94 Toyota Supra took top honors. In the 52 prior events that this series ran with a GT Class, every one of them has been won by either a Camaro or a Mustang.

The Holley EFI also saw a first-time winner in Mike Rovere, whose ’08 Corvette has run 20 events over the last six seasons, without finding its way to the top of the podium until Road America. In the GTS Class, Michael Levitas’ 2014 Porsche 911 GT2RSx had the entire field covered on both the Falken Tire Road Course and Peak Performance Challenge, with Ryan Mathews’ ’02 Corvette in close pursuit. The strong runs by those two cars will force Bob Sobey’s ’13 Nissan GT-R to wait for one more event to be run before it can be declared champion.

That’s a stark contrast to the GTC Class for compact cars, which has four cars in contention for the championship, each running a different model- Civic Type R, SRT-4, MX-5, and S2000. All four competitors are scheduled to run at the regular-season finale, as well as defending champ, Brian Johns. However, Johns will have only run in two events this season, so a new champion will be crowned for the first time since 2018.

Preston Folkestad’s ’84 C10 clinched the regular-season championship in the No-Limit Engineering GTT Class at Road America, but he’ll go for a fourth consecutive class win in Kentucky. Meanwhile, in the Outlaw Class, Chris King’s Corvette was the class of the field, while Anthony Palladino has positioned his ’69 Datsun Roadster to be the regular-season champion. Here’s a look at the top finishers in each class from Road America:

The question now is who might be lined up to receive points invitations to the OUSCI once things wrap up at NCM Motorsports Park? We’ll again remind everyone these are PREDICTIONS and will even go over which of our previous predictions we got wrong. However, this should give everyone a pretty decent sense of where they stand heading into NCM Motorsports Park.

When we last looked at the list, Andrew Scott’s ’87 Buick Grand National was projected to be the third car missing the cut at 1,143 points. Scott received the Summit Racing Spirit of the Event invitation at Road America, so he’s now in the field and everyone below him has moved up a spot.

Before we get ahead of ourselves on at-large invitations (of which there are ten), we’ll review our prior predictions and how what happened at Road America could impact other invitations. In the Classic Car Liquidators GTV Class, Jason Bottenfield and Jim Stehlin failed to capture an invitation at Road America, although both seem secure in heading to Las Vegas. That’s bad news for the rest of the field, because Larry Woo did capture an invitation in his first event of the season, moving everyone else down one notch on the list.

If Bottenfield captures the invitation in Bowling Green, Wayne Atkins, Stehlin and Charles Davis will likely grab the three class invitations, with Davis’ estimated point total of 1,251 points being the cut-off for those invitations.

Just as we saw a darkhorse capture the class invitation in GTV at Road America, the same thing happened in the No-Limit Engineering GTT truck class, when Scott Maeyaert’s C10 grabbed the invitation in his first event in the series. Tyler Gibson’s IH Scout had mechanical issues at Road America and Jesse Vaughn’s C10 couldn’t get the invitation. Gibson’s season may be over, so Vaughn will be battling with Matthew Mielczarek’s C10 and possibly a few other darkhorses in Kentucky. As long as Vaughn or Mielczarek gets the event invitation, the three GTT Class invitations will likely go to the other, plus George Dias’ ’02 Lightning and Williams McDonald’s ’07 Silverado.

In the GTS Class, we thought Clay Shearer’s 2015 Porsche 911 Turbo S would get the invitation either at Road America or NCM. However, Shearer sold that Porsche and showed up with a 2021 911 Turbo S, which didn’t do quite as well. One of the other top contenders, Richard Forsythe, also had mechanical issues with his ’08 Corvette, so another darkhorse got the invitation- Todd Mayer’s 2000 Corvette.

Gunnison Jones and the Ellsworth brothers were all schedule to run Road America, but didn’t make the event, which puts them in jeopardy of not making Las Vegas, if they don’t make it to Bowling Green and put in solid runs there. We’re now projecting Andy Voelkel’s ’20 Corvette could get the class invitation at Bowling Green, with the other three invitations going to Richard Forsythe, Thomas Marquez and Tim Grant.

We did correctly predict Chad Sage’s Porsche GT3RS would get the Holley EFI GTL Class invitation at Road America and we’ll still predict Paul Curley’s C5 will grab the invitation in Kentucky. However, Troy de la Houssaye’s TT-RS didn’t make Road America, which makes Bowling Green a must-run event for him. Danny King also opted to run his Porsche for a second event at Road America, instead of running his Camaro. If King runs the Porsche at Bowling Green, he will likely secure a class invitation along with Greg Matthews’ Corvette and de la Houssaye’s Audi.

The GTC Class also went chalk at Road America, when John Laughlin’s S2000 picked up the win and the class invitation. The question is whether or not James Garfield’s Civic Type R can get it done in Bowling Green. At this point, winning her way in is the only way Tara Johns’ Miata will be able to join her husband’s RX-7, so she’s coming for a fight to the end, while Garfield will be a lock either way.

Dayton de la Houssaye is also a lock either way, but certainly a contender to pick up the class win in Kentucky. If he does, the three class invitations would likely fall to Garfield, Steve Wong’s Civic and Thomas Litton’s Miata, which went down early at Road America.

In the GT Class, family obligations kept Robert Weathers’ Camaro from running and Sam Tennessen’s Supra shocked the field. That pushes everyone down a spot and complicates things in Bowling Green. If Cliff Elliott’s Mustang runs, we predict he’ll take the class win there. That would leave the three class invitations to Matt Ramirez’s Mustang, Clayton Yates’ Camaro and Robert Weathers’ Camaro.

With class invitations projected, we’ll now look at who is projected to grab the ten at-large invitations. The first five at-large entries are predicted to go to:

The last five projected OUSCI at-large invitations are projected to go to:

While the cut-off for entry typically drops with each event, it only dropped by three points after Road America. While the actual cut-off for at-large entries could drop more after the final event is run at Bowling Green, it is unlikely to drop down to the 1000-point range we’ve typically seen in past seasons. So how close is Jesse Shaffer to getting bumped and how close are others to getting in? Take a look at the projected first five out:

It may look encouraging for some and dire for others, but there’s plenty of destinies yet to be determined in Bowling Green, so stay tuned!