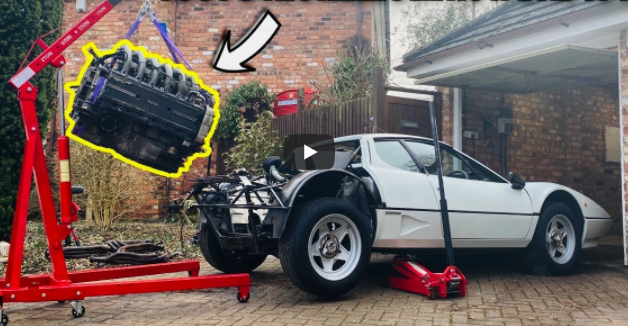 If you think yanking the engine out of an old truck or Mustang is tough, check out what it’s like pulling one from a Ferrari. And not just any Ferrari, but one that is now super famous and arguably worth a fortune once finished being restored. This thing looks like a nightmare to get into. I’m sure if you are a Ferrari guy it is par for the course, but this Chevrolet guy looks at that and thinks “Man that looks like a pain in the arse.”

When you have to take apart chassis components to pull the engine, you know it’s going to be a tough one, especially on a car that has been sitting for years and years outside. Ugh. This probably takes several cans of PB B’laster, lots of swearing, and some luck. Because everything is so tight in this car, and combined with the fact that it has a transaxle instead of a normal layout, there is a lot trying to occupy the same space. I have faith though and am hoping that once they get the engine out of the car and off to the mechanics that it can be rebuilt or refreshed as much as necessary to get it started and running nice. The good news is that it has very little miles on it, the bad news is that it has been sitting for decades outside. We do know the engine turns over though, so with any luck this sucker can run like a junkyard LS before it is over.

This 1965 VW Beetle Does It For Me! Lowered, Clean, And California Style From Worst To First: New Nissan Frontier Truck Has Horsepower, Styling, Features, To Change The Midsize Truck Game