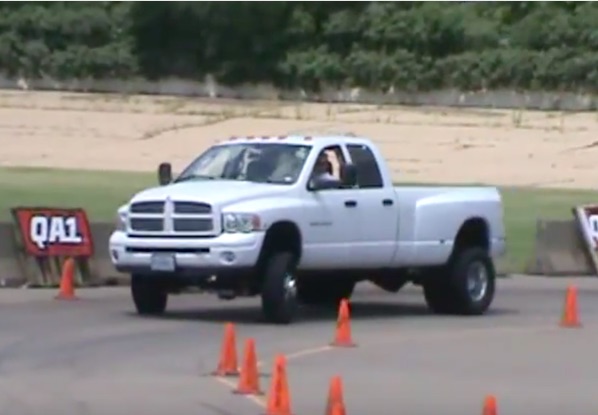 Ok, this one is for every diesel-bro I’ve ever met who keeps telling me that their souped up PowerStroke/Cummins/Duramax/whatever is better in the long run than owning a musclecar or a sports car. Prove it. Not on the dragstrip, where we’ve seen plenty of diesel action. Not at a truck pull, where you are in the perfect element for your precious pickup. No…step out of your comfort zone and prove that your gigantic-ass pickup truck really can hang. Do like this guy did…he drug out his Dodge Ram, complete with a manual transmission and all, and went completely effing bonkers on the autocross course at a show back in 2010. The Great White Whale here only got one cone and outran another big’gun that ran the course, a Ford Excursion. (Where is the footage of that freakshow?!) He saws that wheel like the guy at the helm of the Titanic did the moment “Iceberg, dead ahead!” was heard. When he thinks that the truck is going too wide, he boots the Cummins and snaps the back end around. This guy gets it! He isn’t there to set a record time…if he was, he would be in something half the length at minimum. No, he is here to party and have fun, and he looks to be having a blast!

1979 Bathurst 1000 Video: This Film With Peter Brock Calling His Own Lap and Chris Economaki Reporting Rules! Video: Gentle Giants - Big Horsepower Tractors Of The 1970s From Minneapolis-Moline and Oliver