Crash and Thrash: The Awesome Story Of The One Lap Camaro Eating The Wall At Daytona And How A Band Of Gearheads Got It Back On The Track 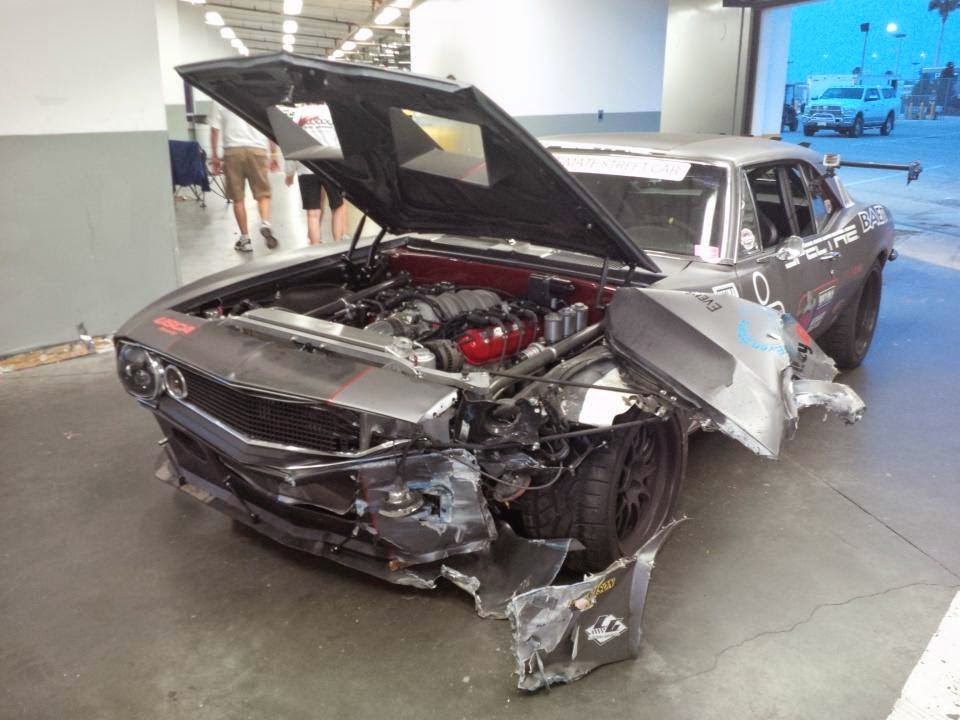 (Words by Jesse Kiser – Photos by James Shipka/USCA/Jesse Kiser) – The One Lap Camaro is one of the baddest 1967 Camaros ever built. Originally burgundy, it’s a true example of what we should all be doing with our cars. Purpose-built and specifically designed to kick butt in the 2,500-mile brutal test that is One Lap of America, the Camaro took home the Vintage American class with James Shipka and autocross legend Mary Pozzi behind the wheel in 2013. In case you don’t know, One Lap is an evolution of the Cannonball Run where competitors drive a 2,500-mile course for one week, stopping at road courses and skid pads, racing on a different track every day—no trailers, crew, or extra tires. 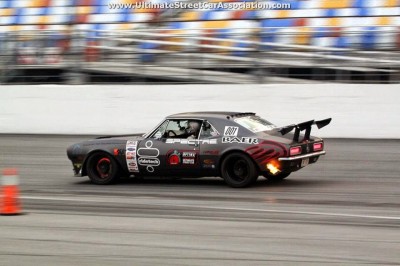 Recently James has been competing with the Ultimate Street Car Association in their Optima Search for the Ultimate Street Car Challenge, a two-day event that holds a road trip/poker run, speed-stop challenge, autocross, and road course racing at different tracks throughout the country. A TV series is taping a under the same name, with host Chad Reynolds and his sweet chin hair leading the way.
James made it through the street challenge without a scratch, but didn’t fare as well on the high banks and curves of the famed Daytona International Speedway. During the second to last run upon the entering Rolex turn 4, a right-handed kink, the One Lap Camaro got loose, front tires hit the dirt, and slid across the grass before buying the right front into the wall. It seemed James was more excited to ride in the NASCAR ambulance and have his car on the same roll back that has hauled many famous cars, than he was worried about the damage. “I’m disappointed in the end result and in my inability to avoid the incident. The car, as Deb reminded me, is bent… It is not broken. Nor am I,” stated James on his Facebook.
The wall killed a tire, bent the radiator support, destroyed a fender and headlights, front spoiler, but luckily didn’t hurt the hood or engine. When rolling it off the roll-back James wanted to crank it, but saw the radiator had been pushing in the crank pulley. No trailer or way home, he started tearing into the car. As competition slowed on the racetrack for the day, competitors entered his garage area and started helping. “When we finally got the car off the truck and pushed in to the garage the weight of the moment was really sinking in. I was 2,800 miles from home without a truck and trailer and, at this point, my mind was reeling with the question of how I was going to get the car fixed… or home… and what that would mean to the rest of the season… or next season. Then the TV folks came in and did their thing and then people started to arrive… and that’s 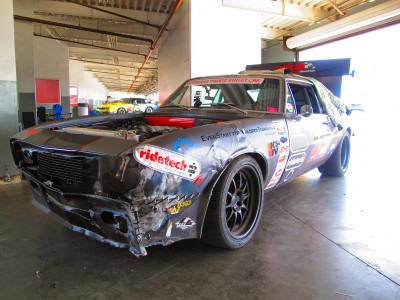 when the fun started,” said James. “I think that Rodney Prouty was probably the first guy there and the two of us started looking things over.”
Only the power steering fluid cap was missing, everything else was luckily cosmetic damage. Chad and crew bent the fender back into a useable shape. By the time the Daytona track crew kicked everyone out the garage at 11pm, the Camaro was back in one piece. “A few minutes later there were two guys jumping up and down on the fender with Chad beating the tar out of it with a 5-pound hammer. From that point until the garage area closed is now just a blur but I would hazard to say that at some points there were a dozen or more guys working on the car – reshaping, repairing, fastening and zip tying hoses and wiring back,” said James. As James headed to the driver’s meeting early in the morning a friend took the wheel to the local Pep Boys mounting a new 315/30-18 Falken tire donated by the guys at RideTech.
That morning they held the Speed-Stop challenge and Autocross, with “a patched up car held together by zip ties and vice grips and an alignment that looked mostly OKish and felt fine in the parking lot,”
James set off for competition. The electric fan cut out mid-day from broken wires, but was quickly fixed. The Camaro ran 10 speed-stop laps and then several on the autocross before running out of gas. That ended the weekend.
We are waiting to hear back from James about how bad the damage is and when he plans on having the car back to pristine condition. He stated this on his blog:
“I am reminded of the many friends who stepped up to help me tonight. The RideTech crew have been on the front lines in helping to get the car bandaged up so that we can compete tomorrow. Chad Reynolds has busted his ass to make the sheet metal almost fit the car. At different points tonight we had Cam Douglass, Mike Mike Copeland and Bret Voelkel knee deep in repairs.”
HERE’S THE SEQUENCE OF EVENTS IN PHOTOS – 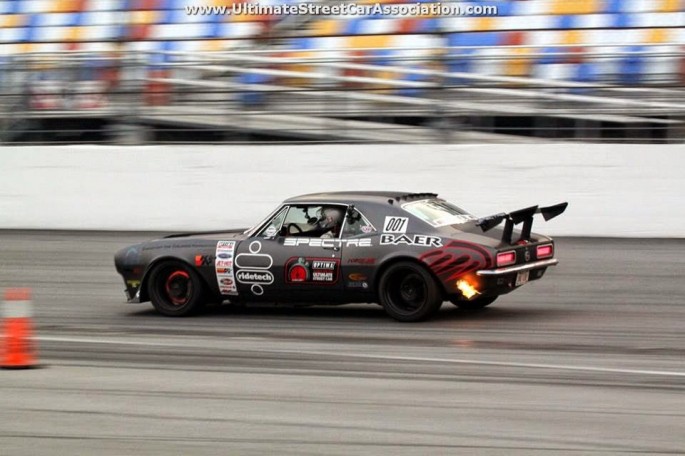 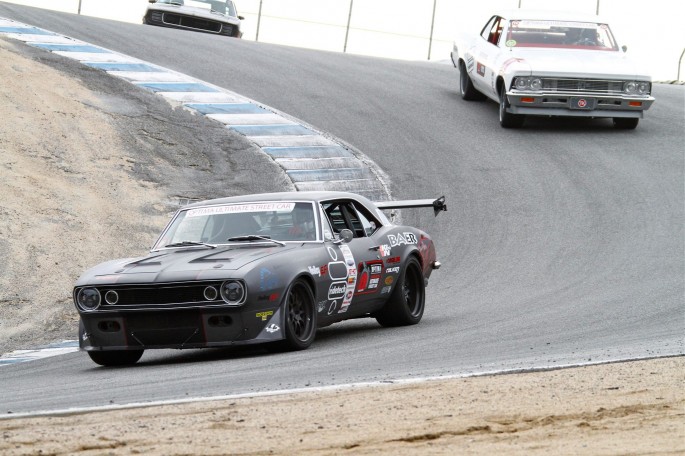 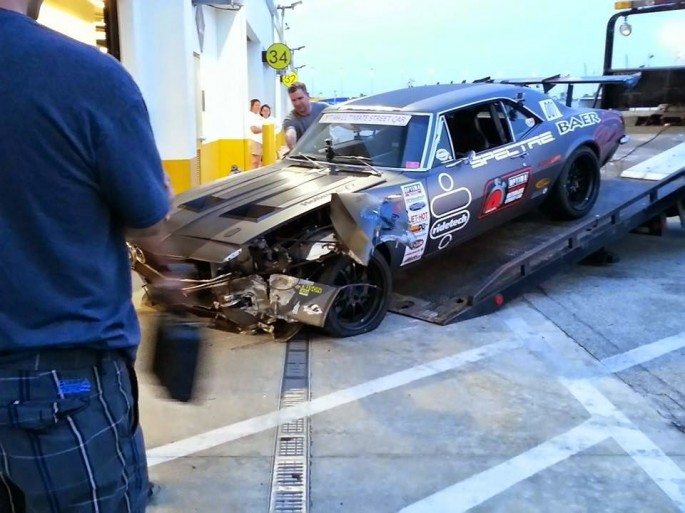 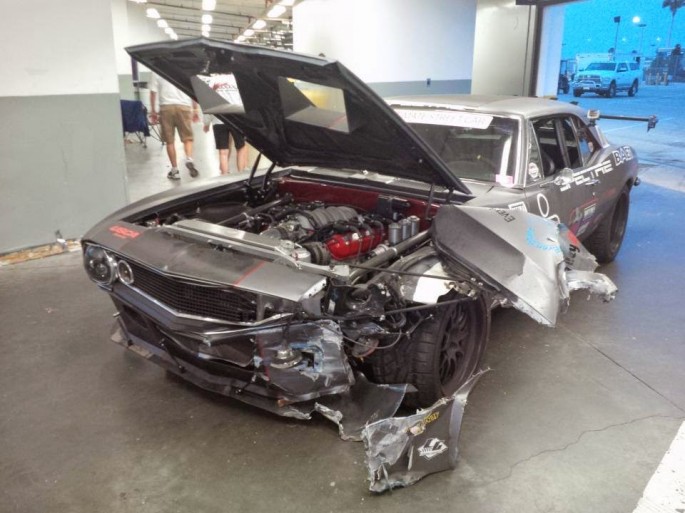 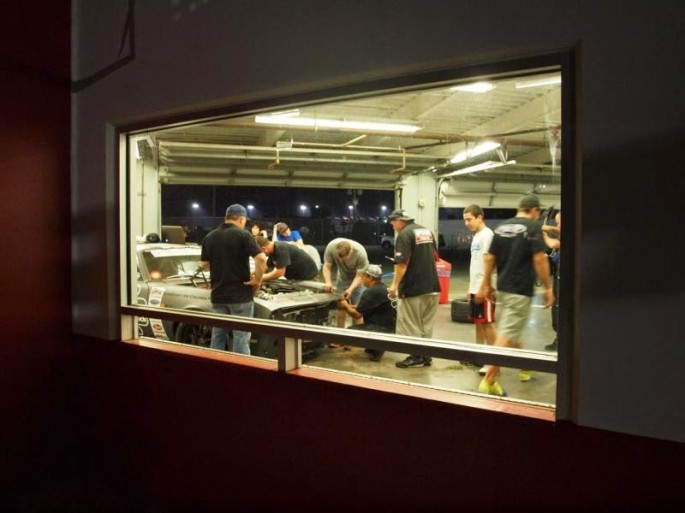 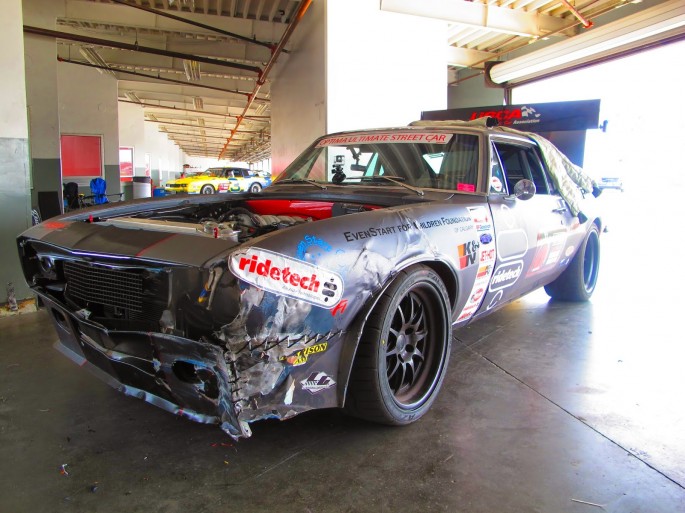 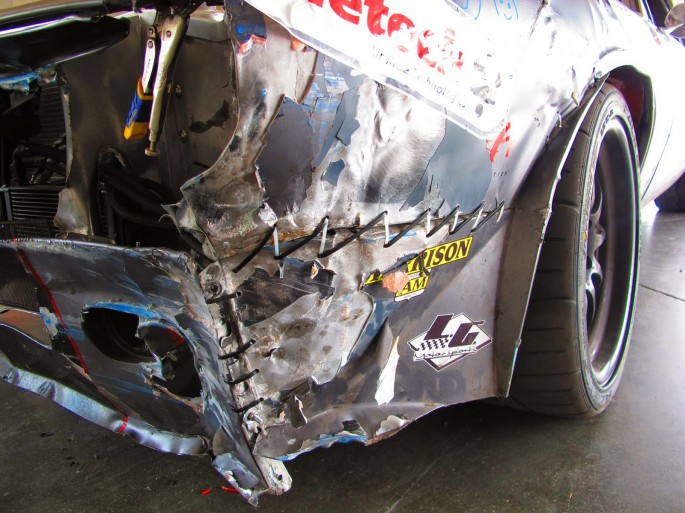 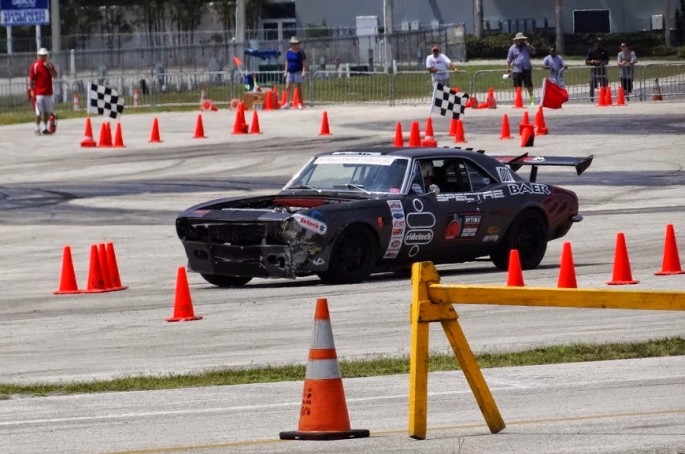 Cool Cars At The Pomona Swap Meet - From Polished To Pulverized A Neat Selection Here What Do You Think Of This 3rd Gen Camaro TRAR? We Want To Like It But Are Not Sure. You Decide!

6 thoughts on “Crash and Thrash: The Awesome Story Of The One Lap Camaro Eating The Wall At Daytona And How A Band Of Gearheads Got It Back On The Track”