Want To Avoid Splashing Into A Frozen Lake? Use Firestone Winter Tires Like Those In This 1970 Ad! 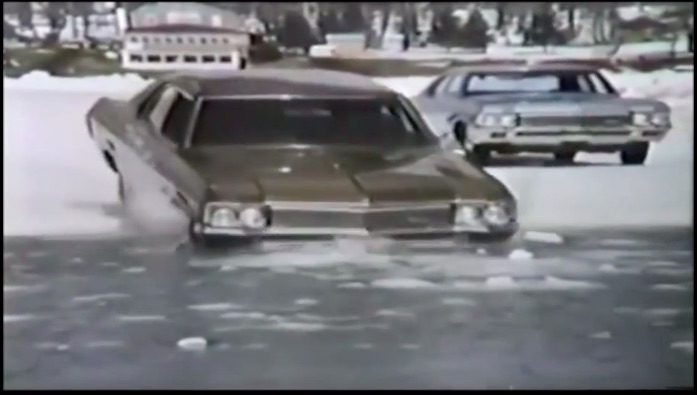 We have seen some awesome television ads for tires over the years. This is doubly true for winter tires. Cars accelerating and braking on ice rinks, cars clawing their way up snow covered mountain roads, and other rustic looking places but this 1970 Firestone ad takes the cake. Why? The implication that the only way you are going to avoid an icy death in a frozen lake is by bolting on the Firestones is a strong brand statement! We’re kind of joking here but the reality is that this is an awesome visual and it’s pretty impactful. Obviously they had something just below to surface of the water to keep the Impala from becoming a submarine but this is still great.

We’re basically past the winter in most of the cold weather states and as “good” as all-season radial tires are, nothing beats legit snow tires for winter performance. If you have never been a cold weather dweller you do not get the advantage you have as a drive on snows as opposed to summer tires of all-seasons but the car stops, accelerates, and turns about 75,000% better in bad conditions that it would otherwise.

This demonstration is kooky but it is legit to some degree. Lots of companies like to cite percentage increases in braking performance and other stuff but it really comes down to the visual. If you stop six feet shorter and don’t plow into the back of a dump truck, that’s all that matters right?

Ever seen another guy do a tire promotional pitch in a wet suit?

2 thoughts on “Want To Avoid Splashing Into A Frozen Lake? Use Firestone Winter Tires Like Those In This 1970 Ad!”