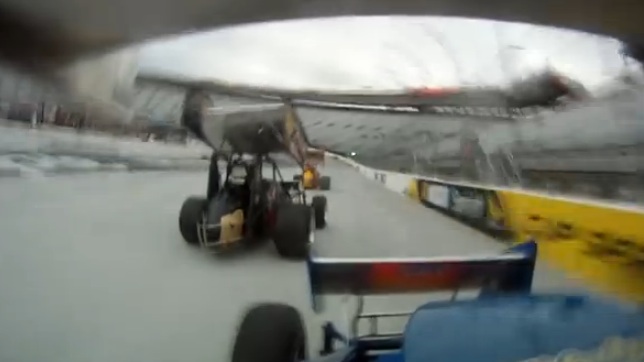 Racing videos do not come much better, faster, or crazier than this one. Apparently back in October 2011, winged Sprint Cars attacked the world famous oval at Bristol Motor Speedway and this video is proof of how nutty it was. These guys were running 150mph laps around the little bull ring in qualifying and then about the same wheel to wheel. The first two minutes of this video are heart stopping and not because of crashes, but because of the intensity, speed, and proximity of the racing!

While this is a 14-minute video, there is a yellow flag thrown in the middle, so after the first couple minutes you need to jump ahead, but you’ll see a little bubble on the screen telling you to do that. If you are not into Sprint cars or oval racing, do not let that stop you from pressing play on this bad boy. You’ll be on the edge of your seat just the same!

Pay attention to just how close these open wheelers get to one another at speed. Realize that there aren’t any mirrors on these cars, there isn’t any guy on the roof spotting for the team, and that you are watching some of the most skilled racing drivers in the world!

The car spits the bit a little after 10-minutes, but this video is still the stuff!

Press play and jump to the edge of your seat!

Shut Up and Listen: This Long Form Interview With Race Announcing Legend Murray Walker Is Worth The Watch One Good Turn Deserves Another: The Story Of "The Pandra" And The California Wildfires