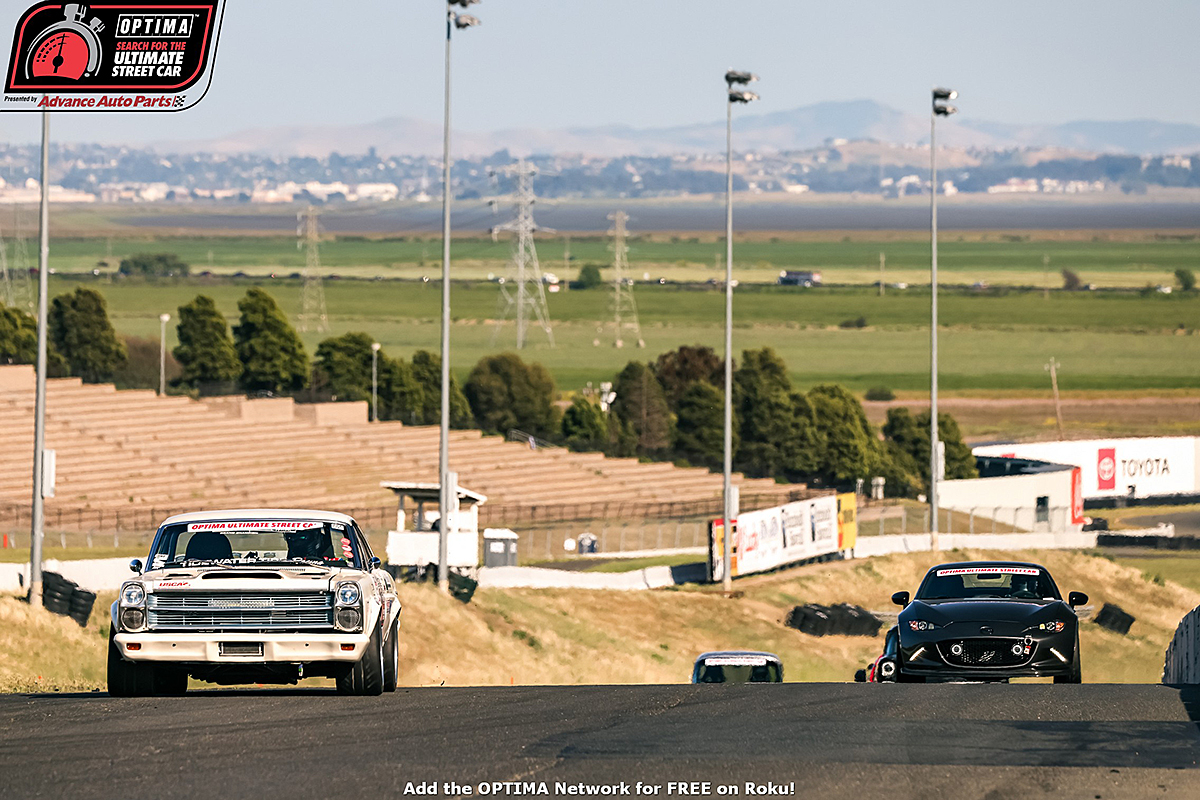 Here’s the second batch of photos from Optima’s Search for the Ultimate Street Car. Use the link below to see the first gallery if you missed it!

(Words by Jim McIlvaine) In a quick pivot, OPTIMA’s 2022 Search for the Ultimate Street Car, presented by Advance Auto Parts, partnered with SpeedTour, to run with that series at selected events throughout the country. The SpeedTour series includes the Formula Regional Americas Championship, F4 United States Championship, Vintage Race of Champions Pro-Am series, the Trans Am Series presented by Pirelli and the Sportscar Vintage Racing Association (SVRA).

Not all of those series will run at every track, but when the OPTIMA series runs alongside SVRA, it offers a unique opportunity to compare the performance of cars from the Pro-Touring era with those from the Historic Trans Am era of the late-60s and early-1970s. After all, the Pro-Touring movement was born with at least part of the intent of producing performance comparable to what those legendary Historic Trans Am cars were capable of on-road courses during their heydey.

As with the Pro-Street trend and most-likely any other automotive trend, some Pro-Touring vehicles are sometimes built in pursuit of the “look,” without much concern as to whether the end result offers any improvement in performance. Cut springs, horrible suspension geometry, ill-fitting wheel/tire combinations and faux disc brake covers hiding drum brakes are often the result of many of these half-hearted attempts at a legitimate Pro-Touring build. However, in the OPTIMA series, the proof comes on the track. If such a car showed up here, the builder’s efforts would be exposed rather quickly, even if they used the right parts, but didn’t know how to dial them in.

As a result, the Pro-Touring cars and trucks competing in either the Classic Car Liquidators GTV Class for pre-1990 musclecars or the No-Limit Engineering Truck Class, tend to showcase some of the very best examples of Pro-Touring form aligning with function. The OPTIMA series places very few limitations on competitors, in keeping with the “ultimate” theme, but would that give them an advantage over the iconic Trans Am cars?

There are no horsepower, engine size or power-adder limitations in the OPTIMA series, so these cars can run whatever they’d like. However, putting that power to the track is somewhat limited by minimum treadwear requirements. All cars are required to run at least 200 treadwear street tires, but there is no limitations on footprint, so some will run up to 335-series tires, whereas the Trans Am cars run slicks, although not nearly as wide. The OPTIMA cars can also benefit from any driver assist features available, like traction control and ABS.

There are also no limitations in the OPTIMA series on suspension modifications, although tube-frame chassis vehicles are required to run in the SpeedTech Lucky 7 Outlaw Class. However, competitive cars in the OPTIMA series will run full interiors and have all their OE equipment, including windows, lights, wipers, horn, radio and HVAC systems functioning, which can add a tremendous amount of weight compared to the Trans Am cars, which may not even be running hefty chrome bumpers and may have just the bare essentials inside.

On this weekend at Sonoma Raceway, the fastest qualifier in Historic Trans Am was John Hildebrand’s ’64 Pontiac GTO, which ran a 1:55.473. On the OPTIMA side, Brian Hobaugh’s ’73 Camaro ran a 1:49.162 in the Falken Tire Road Course Time Trial. However, the gap between 1st and 15th in the Historic Trans Am field was only about 15 seconds, where the OPTIMA field had a range of about 25 seconds.

If you’re curious how the newer cars in OPTIMA’s GT Class would fare against the modern-day Trans Am cars, that comparison was also available on this weekend, as the Trans Am series ran at Sonoma as well. Thomas Merrill’s TA2 Mustang was the fastest of 43 qualifiers, running 1:36.195, while Dave Schotz’s 2020 Camaro was the fastest overall car in the Falken Tire Road Course Time Trial, running a 1:47.267. The modern, purpose-built racecars have a clear advantage in that comparsion and in both instances, the race cars are easily capable of running close to their best times for many laps where the street cars (and their street tires) will begin to fade significantly after just a few laps.

The OPTIMA series returns to action in May at Road America and you can also catch the SVRA series there on the same weekend (Trans Am races there later in the year). If you can’t make it to Elkhart Lake, you check out the OPTIMA series in more depth from anywhere in the world, by adding the OPTIMA Network to your Roku device. It’s a free download and all the past episodes of the series are available there for free, on-demand viewing. You can also learn more about the series by visiting the website at www.DriveOPTIMA.com

CLICK HERE TO SEE OUR FIRST GALLERY OF PHOTOS