Morning Symphony: Mercedes Carlsson SLK 340 – Tease Your Ears With The Sound Of A Judd V8 At Full Fury! 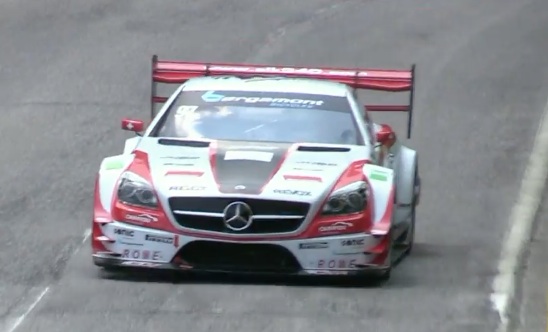 Three-point-four liters. Roughly 208 cubic inches. Just under three horsepower per cubic inch. Yes, this Mercedes SLK is one bad mother, and the noise it makes…that’s the kind of shriek that Greek mythology stories would reference. It’s somewhere between a pissed-off, high-revving small-block and an IndyCar in tenor, and in the SLK it turns what is normally a bland retractable roof coupe that is better suited to looking pretty and sporty for owners who could give a rat’s backside less about “sporty” cars into a monster that thinks it’s really a touring car.

The noisemaker that blasts out that automotive siren’s call is a Judd V8. It’s only got 317 ft/lbs of torque, but the 610 horsepower top-end charge is monstrous, and that’s before you realize that this racing machine weighs in at 1,720 pounds. At that weight a moderately healthy four-cylinder could be an entertaining venue…putting in an engine from a manufacturer hell-bent on making racing-only engines that howl like a rabid wolf is just glorious overkill. Crank the speakers on this monster!

Classic YouTube: EVOC Training For The California Highway Patrol - 9C1 Caprices, B4C Camaro and SSP Mustangs! What Does A Chrysler 360 Need In Order To Rock? Check Out This Bit Of Dyno Work!