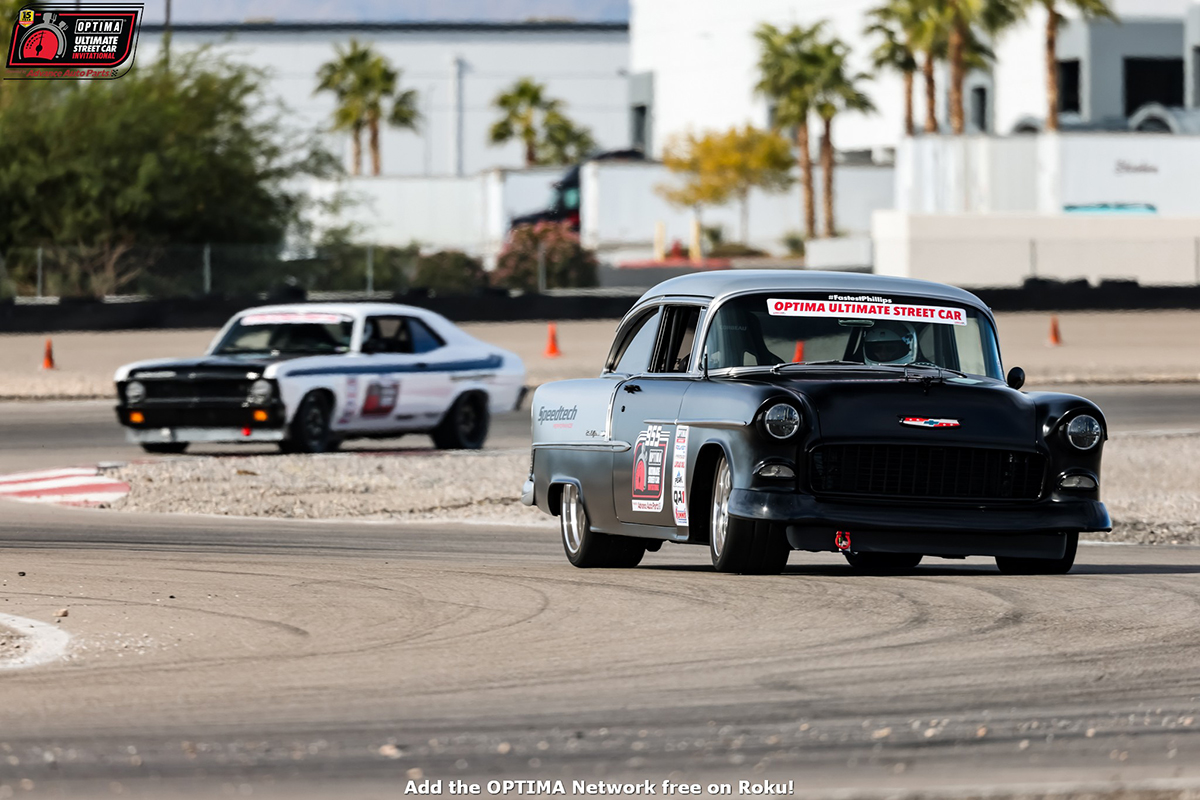 (Words by Jim McIlvaine, Photos by Ian Brockman) The OPTIMA Ultimate Street Car Invitational has now been held 15 times and the sky has fallen at least three times in that span. The first instance was Danny Popp’s win behind the wheel of Todd Rumpke’s Corvette in 2011. That signaled the first time a modern performance car had taken the title. Up until that point, it had either been Pro-Touring cars or at least a car from that era (Jim McKamey won in a ’63 Cobra in 2009).


Critics said the era of Pro-Touring cars being competitive had come to an end, just three years after it had begun. Then Mark Stielow proved them wrong, winning in his ’67 Camaro, Mayhem, the following year and Brian Hobaugh’s ’65 Corvette won the year after that. Then Danny Popp went on another tear, capturing the title three years in a row in his ’03 Corvette and the doomsday predictions surfaced again. It seemed like Popp might not stop winning until he stopped competing, but Ken Thwaits wanted to climb to the top of the mountain. As a lifelong Camaro fan, Ken tried to make it happen in a fifth gen Camaro, but soon determined there were more viable options.

RS Motors had been competing in Mitsubishi Evos and had come close to beating Popp, on more than one occasion, with more than one car. Thwaits figured his extra resources could push the lightweight, all-wheel drive platform to the top. While it proved to be a challenge to get through a weekend, Thwaits eventually prevailed in 2017. If there was crying with Popp’s victory in 2011, there was downright wailing with Thwaits’ win.

Not only had another modern car won the title, but it wasn’t even domestic. However, just like we saw after Popp’s first win, history repeated itself and Mike DuSold came along in a ’67 Camaro, blocking Thwaits’ effort to defend his title. With Thwaits moving on to the Trans Am series, DuSold picked up two wins in a row, before his tube-frame chassis Camaro was banished to the Outlaw Class and the door was once again open for a new champion…or maybe the return of an old one? In 2020, it was a C4 Corvette that blurred the line between old school and modern performance in 2020.

The C4 has largely been overlooked by the aftermarket, but CB Ramey found a way to make his ’87 Vette work, by essentially building a C6 underneath the skin. However, Jake Rozelle’s Corvette only missed the championship by a single point that year and returned in 2021 to beat Ramey by the same margin, which set us up for another showdown this year.

Ramey and Rozelle squared off earlier in the year at Sonoma, where Ramey took another win by a single point and it seemed like the two were destined to battle for the title again in Las Vegas, until Ramey’s Corvette was a last-minute scratch. While that might’ve seemed to clear the path for Rozelle to repeat as champion, Bob Sobey had other plans that included his 2013 Nissan GT-R.

Sobey has spent several years in the series, searching for a way to the top. Although the GT-R is significantly heavier than an Evo, it still retained the significant advantages of all-wheel drive, traction control and anti-lock brakes, making it a very competitive platform in both the QA1 Autocross and Peak Performance Challenge.

Sobey is also an accomplished road racer with an extensive history in the Trans Am series, but like other competitors who came to the OPTIMA series with an extensive road racing background, including Michael Levitas, Sobey needed to improve his performance on the QA1 Autocross, while cracking the code that leads to a top-10 finish in the Lingenfelter Design & Engineering Challenge. In his first OUSCI appearance, Sobey took the top spot on the Peak Performance Challenge and finished fifth on the Falken Tire Road Course Time Trial, but a 23rd place finish in the Lingenfelter Design & Engineering Challenge and 35th on the QA1 Autocross relegated him to an eighth place overall finish.

After taking the COVID year off, Sobey returned in 2021 with a vastly-improved program, landing inside the top-10 in all competitive segments and finishing on the podium, just seven points back from Ramey. While he was certainly on the radar of those who follow the series in 2022, the tight battles between Rozelle and Ramey probably overshadowed Sobey’s competitiveness to the casual observer.

With each position counting for a point, there are always wildcards in the OUSCI, that can create just enough of a gap between top contenders in various segments, to have a significant impact on the overall outcome. That was certainly evident in every segment in the 2022 OUSCI, starting with the Lingenfelter Design & Engineering Challenge, where four cars that finished outside of the top-20 helped Jake Rozelle gain a five-point advantage over Sobey.

Sobey got some help of his own from two such competitors on the Peak Performance Challenge, combined with a finish outside the top-10 for Rozelle, which erased the Corvette’s five-point lead and added six more points in Sobey’s favor. Rozelle was the favorite on the Falken Tire Road Course, so Sobey looked to build up as much of a lead as he could, heading into the final day. The GT-R added another eight-point advantage in the QA1 Autocross and made it to Las Vegas Motor Speedway with a sizable 14-point advantage over Rozelle.

However, Sobey didn’t realize that his GT-R would develop a similarly sizable oil leak the following morning, causing him to miss the first session of the Falken Tire Road Course Time Trial. A competitor’s best laps from the morning and afternoon sessions are combined for a total time, so Sobey had to make a run in the morning second session, if he wanted any shot of winning the title.

The GT-R only recorded one lap in the morning and it was so far off Rozelle’s pace, that Sobey’s 14-point lead vanished and the two cars were tied coming out of the lunch break. Rozelle led the field on the road course, so he could only hope enough cars would stay in between his Corvette and Sobey’s GT-R, that Sobey wouldn’t be able to move up in the afternoon. Sobey continued to work on the GT-R and not only made both afternoon sessions, but he improved on his time enough, that he was able to get around Rozelle in the standings and secure the OUSCI win.

Along with the OUSCI title, the target has now moved to Sobey’s back and competitors throughout the series are already plotting on how they can take his crown in 2023. You can catch all the action captured by the TV series, every Friday night at 8PM ET/PT on MAVTV. The schedule for the 2023 season will probably be announced next month, so if you’d like to get in on the action, keep a close eye on www.DriveOPTIMA.com for announcements.