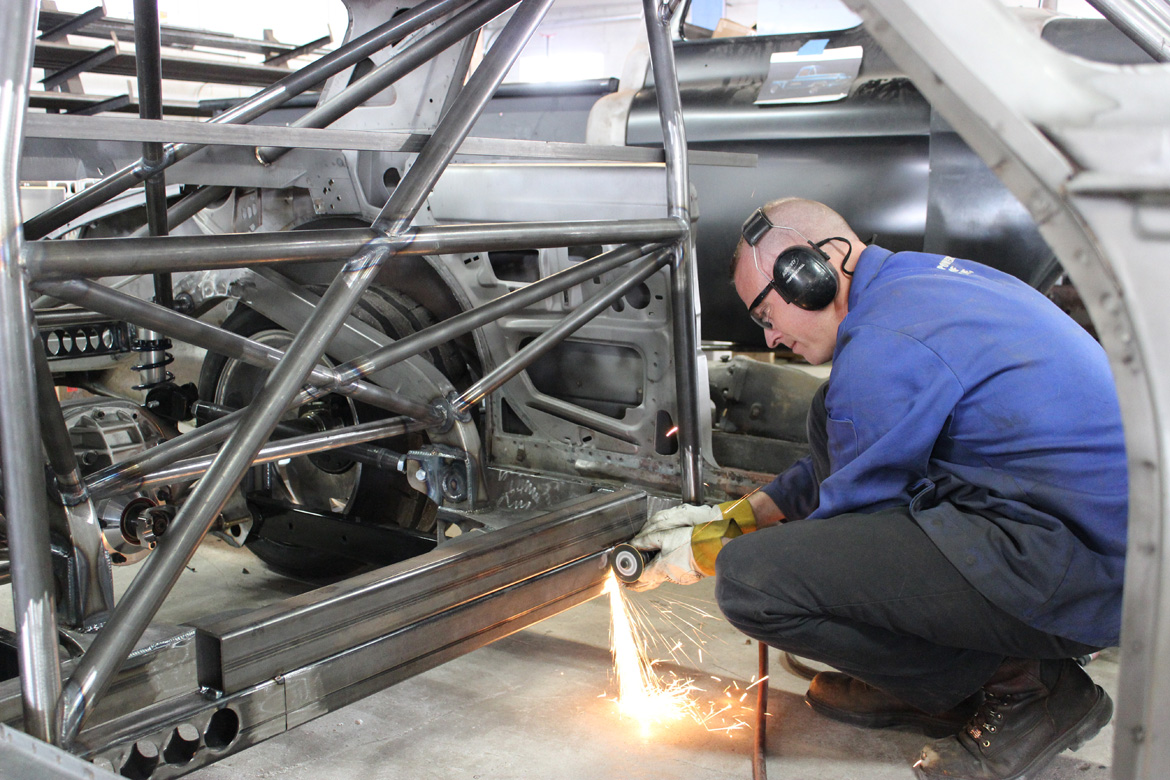 We’re back with another update on Project Violent Valiant the unique pro touring destroyer being built by Hot Rod Chassis and Cycle‘s Kevin Tully at the Skunkworks in Illinois. In case you have been in prison or otherwise away from the computer for the last several months, we have been following this build on a near weekly basis as a stock Valiant was driven into the shop, blown apart, and is now being built into a Chrysler powered, full tilt, corner burning pro touring car literally from the ground up. In this installment, we’ll see Tully installing the front frame rails that he fabricated for the car. We’re getting close to actually seeing this thing down on four wheels (maybe there’s even a teaser shot of that at the end of this update!) but there’s still a long way to go to complete the car and get it burning tires yet. We’re still neck deep in the fabrication portion of the program and it sure is fun to watch this thing get filled up with round and square tubing from a metal master like Kevin. Now….onto the update! 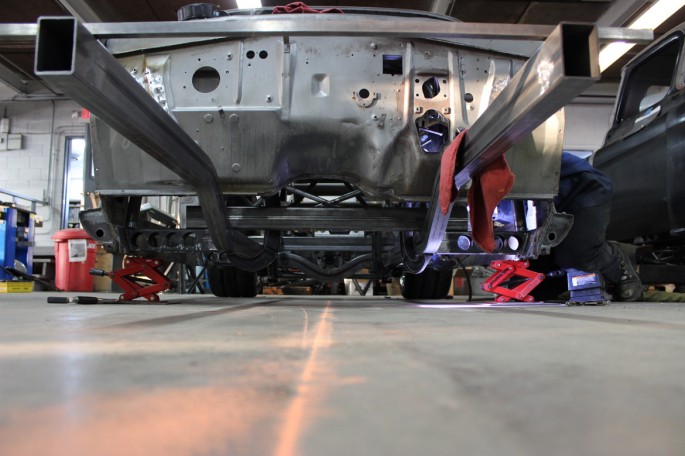 Not to blow a “surprise” but here’s the 2×3 .120 wall rectangle tube rails as they looked after being installed into the car. Kevin reports that this isn’t the most complicated of processes, but that measurements and precision are paramount. These will serve as the foundation for the car’s suspension so accuracy is critical. 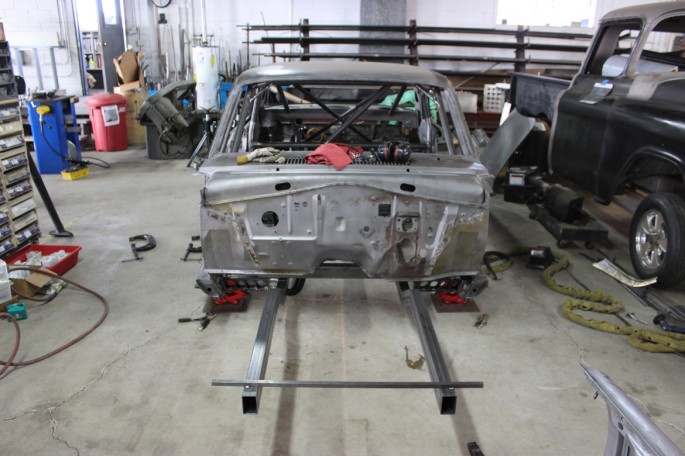 The frame rails are 28″ apart which is pretty narrow but this is a little car, so it all makes some sense. Kevin didn’t just pull that number out of the air, it was achieved by mocking up the front end with the clip positioned as it will be on the completed car. Kevin reports that it is important to take the time to do the mock up with the spindle and brake rotor, among other components to make sure everything is going to fit. After seeing what he needed, 28″ was the number and he went for it. 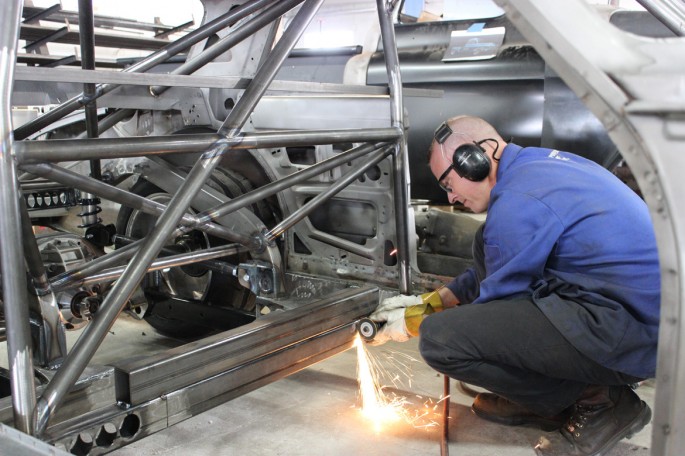 After bending up the rails, laying them out, and affixing them together with three small cross members on a work table, Kevin was ready to install them into the car as their own subassembly. Measuring in from each side, Kevin marked the center crossmember of the car and began cutting the center out of it. The front frame rails will pass through this opening and tie into the rear frame which was completed in an earlier update. The piece on the top that you see in this photo is welded in four spots and will keep the car true and straight when the bottom is removed. Kevin starts the cut from the top with a Porta-Band saw, welds the sistered piece in, and then finished the lower cuts with a wheel as you see here. 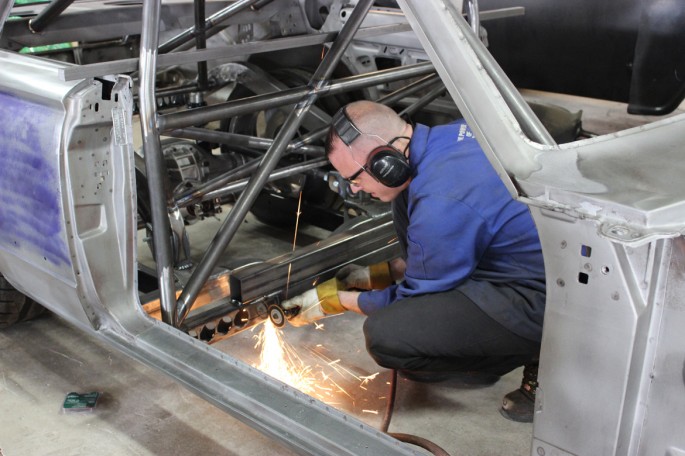 Kevin said that he had a total of about 4-hours in the actual installation of the rails. Rushing this type of work can lead to disaster because the success and performance of the car are literally dependent on things being straight, true, and strong. 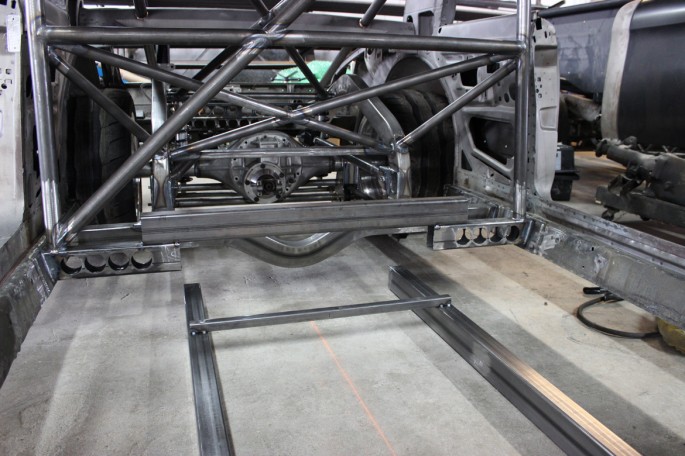 So here’s what we’re left with with the center out of that crossmember. You can see the new frame rails lying below it on the floor. Kevin told us that if you did your job right these should be a nice tight fit up into that space. We’re happy to report that they were. 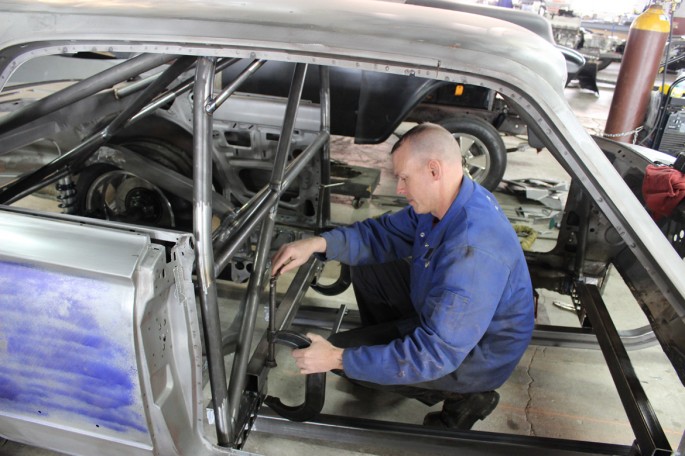 These man-sized C-clamps were used to hold everything in place so Kevin could finish weld the rails in. 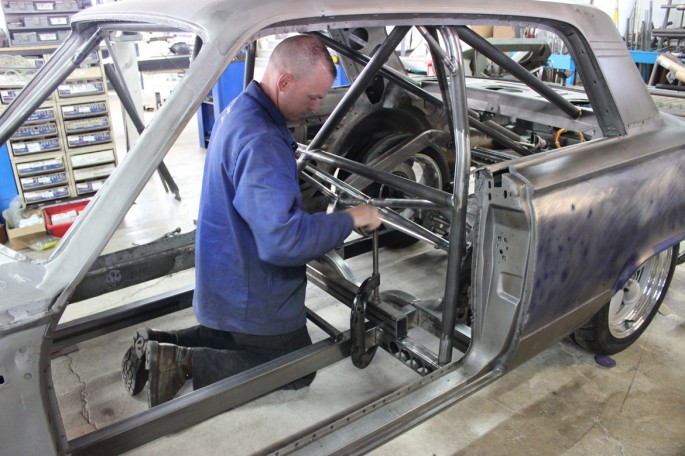 Here you can get an idea of where the front frame ties into the rear frame of the car. 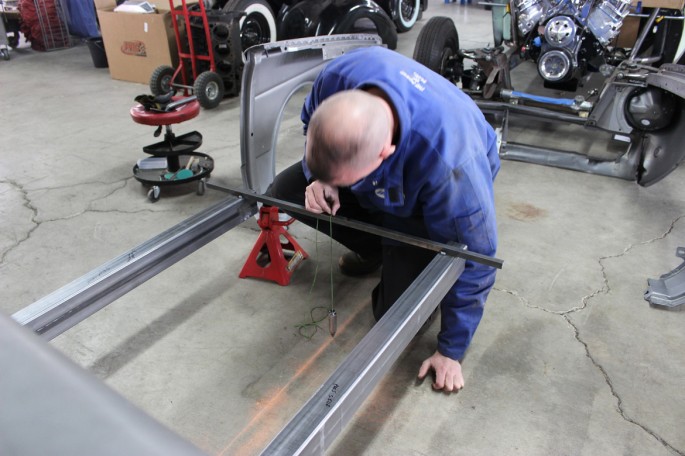 Once things were clamped into place, the next critical step was to make sure that everything was still happy, square, and where it should be. Here we can see Kevin using the plumb bob. 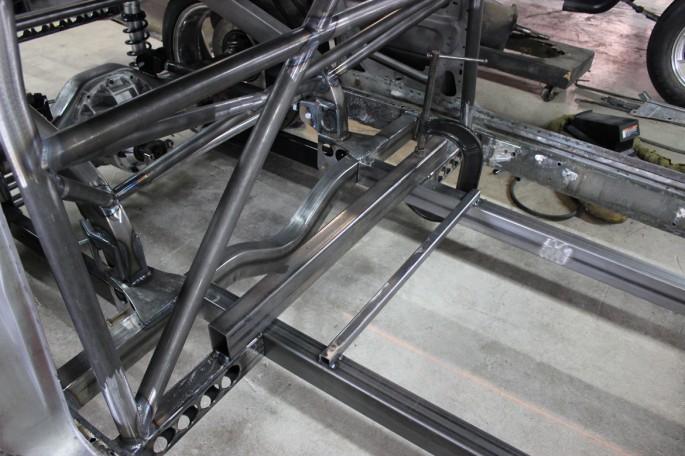 So with all the measuring and figuring done, Kevin was ready to make the commitment and finish weld the frame assembly in. With 3″ weld beads in what Kevin told us were 12 locations, strength and stiffness aren’t going to be concerns. 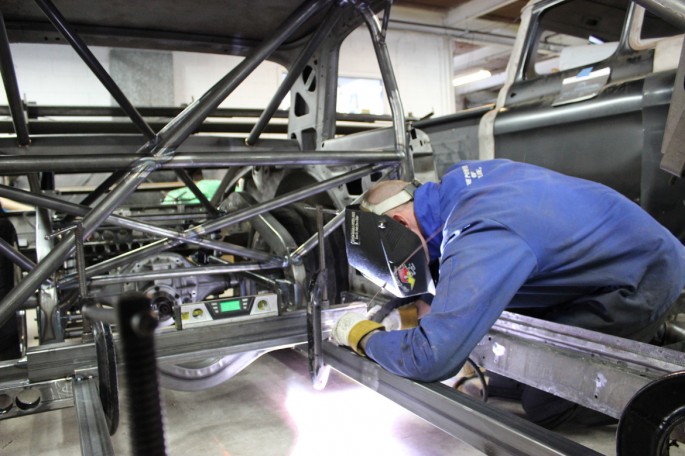 Kevin had to wedge himself into some tight spots to burn all this steel together. 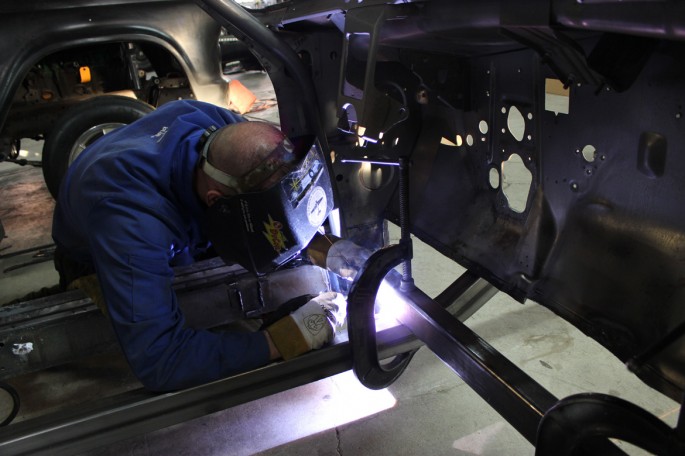 With the rear welded in, Kevin moved to the front crossmember and made more puddles of molten steel. 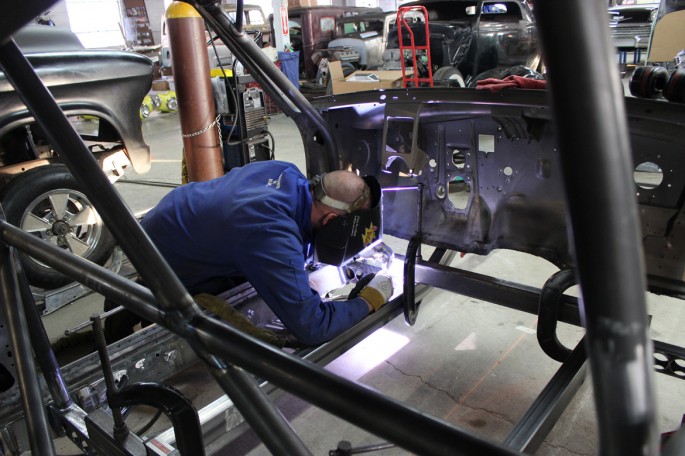 We need some of those clamps. Those babies could support a bridge! 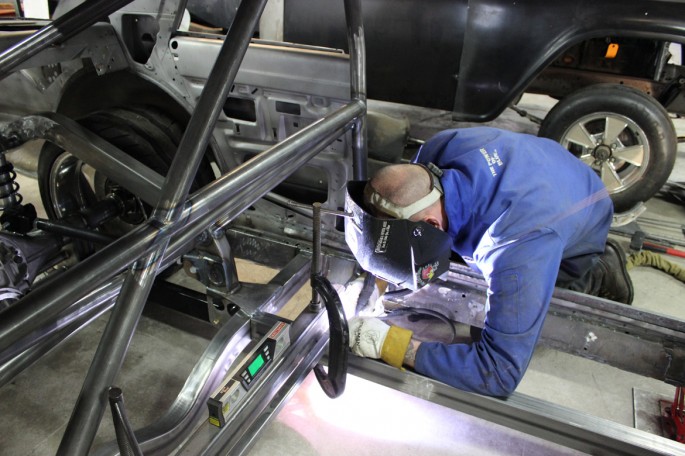 Note the ever present digital level. Kevin said that he was constantly checking it to make sure everything was square and happy. 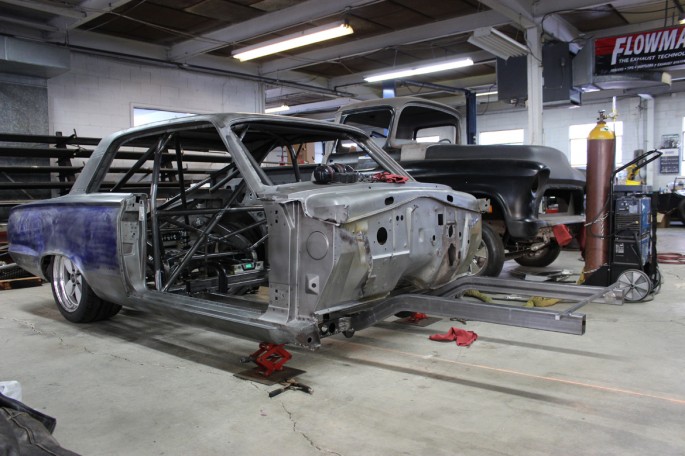 While it may just look like a couple of rectangular tubes hanging out in the breeze, the fact is that those frame rails mark an important step forward for the project. We now will start to see the front suspension come together and lots of other fun stuff. This is getting good! 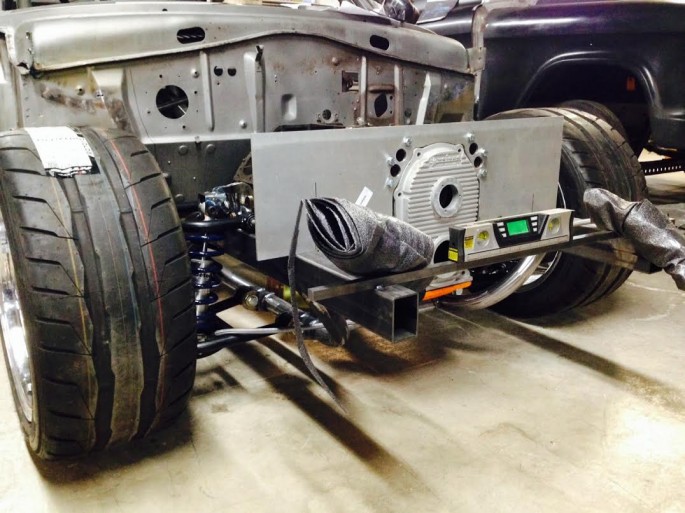 Oh! And about that teaser photo we promised you of next week’s update…

QuickTrick Is Giving Away One Of Their Awesome QuickSlide Caster/Camber Alignment Tools! Enter Here Before Feb 28! Watch A Large Ferry Thread The Needle Between Two Ships And Get Run Aground On Purpose At A Wrecking Yard In Turkey